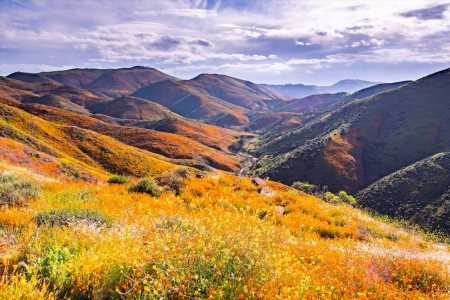 One of the best places to view Yosemite’s spring bloom is at the Hite Cove Trail, at the confluence of the South Fork and Merced rivers along CA 140. The 4.5-mile path meanders along the river on a hillside in the Sierra National Forest and starts at the parking area for Savage’s Trading Post. The next best spot for viewing wildflowers near Yosemite starts at the Briceburg Visitor Center (closed until April 30), located 12 miles east of Mariposa.

After crossing a one-lane cable suspension bridge, a repurposed railroad grade follows the Merced, with a wide trail extending east and west. A footpath leads east while a dirt road extends west. Currently, the landscape, pictured above and below, is a swath of orange, purple and blue.

“We ask people to visit these areas responsibly,” says Tony McDaniel from Mariposa Yosemite Tourism. “Don’t pick flowers, don’t trample flowers, and stay on the trail. These flowers are there for everyone to enjoy.”

Along the Central California coast is Montana de Oro State Park, where steward Seth Souza says, “It’s a superbloom here now. There are hundreds of thousands of poppies that cover the hillsides orange.” He recommends Point Buchon, a private area near the park where visitors can enter as long as they sign a waiver. “It’s phenomenal, there’s the beach, limestone arches, and the whales and dolphins are amazing.”

3 Gin Cocktails With a California Twist

Due to COVID-19 precautions, Point Buchon is currently only partially open to the public, including a 1.8-mile hike that leads to the sea. Now, only 275 people are allowed in daily. “The hike is all along the sea the whole way, and it’s family-friendly,” he continued. The hike takes viewers to Windy Point, offering views of Diablo Canyon.

So with you gaze set farther north, additional prime viewing areas for this spring’s Northern California bloom are at Robert Louis Stevenson State Park, located seven miles north of Calistoga and on nearby Oat Hill Mine Trail in town. “We have great blooms here,” says Jessica Ardizzone from the Napa County Regional Park and Open Space District, which oversees both areas.

A five-mile hike in Robert Louis Stevenson State Park takes viewers to the summit of Mount St. Helena, where on clear days views extend up to 200 miles. Seventeen types of lupine grow there, including the silver lupine, which varies in color from blue-violet to pink. With both fragrance and beauty, the California lilac has blue-violet flowers and a rich aroma.

5 Great Places in California to Get Into Overlanding

Planning to fly away for the holidays? So are nearly 46 million other people.

October Flights Are the Cheapest They've Been in 6 Years, According to Hopper

France strike: Is it safe to travel to Paris amid pension protest chaos?