The perfect time to explore glorious Guernsey: Touring the dramatic island as it marks the 75th anniversary of its liberation from Hitler’s forces

After three courses with all the trimmings at Old Government House, Guernsey’s only five-star boutique hotel, I ease back in my chair with a glass of locally produced damson gin and finally pay some notice to the elegant surroundings.

My eyes hover over photographs above the mantelpiece: officers dancing, lounging on the terrace in the sun, even a uniformed string quartet. They seem so natural in the Georgian dining room, with its fine mahogany doors and portraits of bygone governors in their red coats, that you would hardly give them a second look.

But on closer inspection, you suddenly notice that these aren’t British officers at all but those from the Wehrmacht, enjoying a little rest and recreation in the Channel Islands, the only bit of Britain that fell to Hitler’s forces. 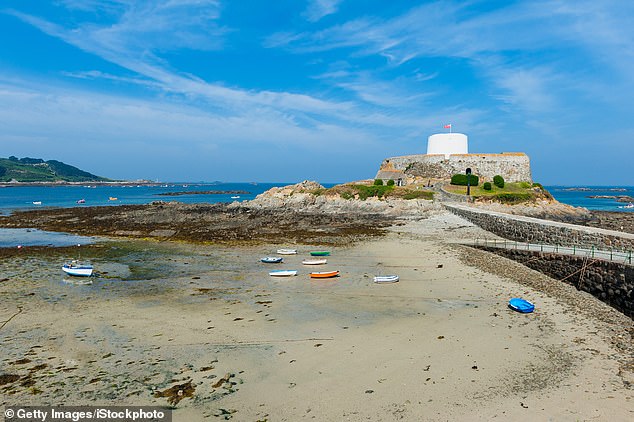 Reminders of the past: The Germans occupied Fort Grey in St Peter Port, above, during the war

This year, Guernsey celebrates the 75th anniversary of its liberation from five years of German occupation, an event that disfigured the island’s landscape and left deep but hidden wounds in the inhabitants.

For decades after the war, Guernsey, as elsewhere in occupied Europe, made strenuous efforts to forget the whole awful experience.

Now, though, the bitterness felt by former generations has gone and the island has come to terms with the wartime occupation, which began in June 1940. This period is captured beautifully in 2018’s gentle film The Guernsey Literary And Potato Peel Pie Society, starring Lily James.

After the fall of France, nothing could be done to defend the Channel Islands, and over three days, a desperate evacuation was organised, during which half of Guernsey’s population and most of its children were ferried to mainland Britain. But it was hit and miss to get a place on a boat. And no one imagined the war would last another five years.

The highlight of this year’s anniversary events – billed as Heritage 75 – will be the 75th Liberation Day on May 9. It has been designated a public holiday on the island and will see parades and a huge public turnout in the streets of the capital St Peter Port for what will be the last significant anniversary in which locals who were alive during the occupation take part. 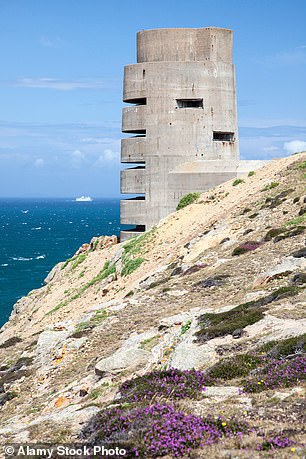 Pictured is one of the German bunkers on Guernsey

Numerous other events are being organised throughout the year which will celebrate the island’s wartime history. There will be occupation-themed guided walks, dinners and cycle rides, and food festivals where you can sample potato peel pies (served as enticing canapes rather than the monotonous original). Meanwhile, a group of 30 local volunteers have led Fortress Guernsey, a project to restore hitherto closed German blockhouses and gun emplacements, which will be open to the public for the first time this year.

I was treated to a tour in a wartime Dodge staff car, but getting around Guernsey is simple enough. There are numerous buses (it costs just £1 to go around the island) or else visitors can hire a car.

Some of the wartime sites are astonishing, such as the four vast emplacements for Russian naval guns captured by the Germans at Sebastopol and laboriously transported all the way to Guernsey. Each had a crew and defence force of 600 men, but the guns were fired only a handful of times.

Visitors will find Old Government House Hotel, built in 1796 as the governor’s official residence, is a draw for formal afternoon tea, while a pleasant drink can be had at The Crow’s Nest nearby.

For a grander experience, La Fregate, an 18th Century manor house with views of Sark, is a must for anyone who loves seafood. But it is one of Guernsey’s fanciest restaurants and has prices to match. 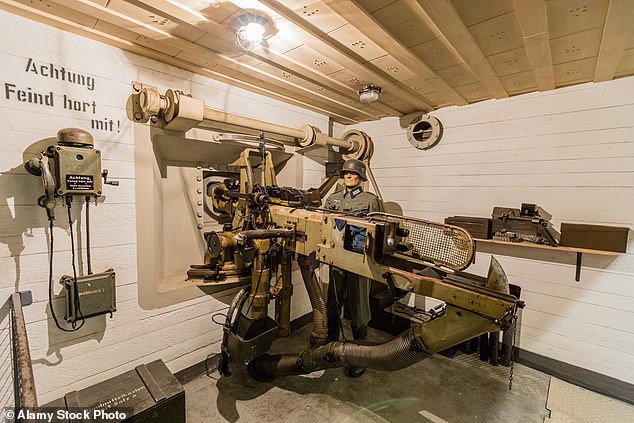 Fascinating collection: A German anti-tank gun, just one of the exhibits on show at the German Occupation Museum

Gill Girard organises walking tours of the island and rates La Nautique and Octopus for delicious local catches, which can be enjoyed while admiring wonderful sea views. A descendant from an old Guernsey family, Gill appears in extra features of The Guernsey Literary And Potato Peel Pie Society and is a mine of fascinating information. The island, she says, offers visitors decent B&Bs, such as La Roche Guest House and Les Rouvets Farm.

History buffs should sign up with Tim Osborne, who specialises in German occupation walks and tours, or visit the German Occupation Museum, privately run by an enthusiast called Richard Heaume.

It contains a captivating collection of exhibits, including a German anti-tank gun and a poster with the message: ‘ATTENTION-WARNING Any persons found marking walls with V signs or insults against the German Armed Forces are liable to be shot.’

And if reading about this traumatic period is more your thing, then A Quiet War, by tour guide and author Fred Gallienne, is recommended. Fred, described as a quintessential Guernseyman, lived through the German occupation and has plenty of tales to tell of his childhood. And it is these nuggets of Guernsey’s past, now dug up for our delight, which will linger long in the minds of visitors.

Sebastian O’Kelly was a guest of Visit Guernsey and stayed at Old Government House – B&B rooms cost £205 a night (theoghhotel.com). See visitguernsey.com/heritage75 for more information about this year’s anniversary events. Return flights from Gatwick to Guernsey with Aurigny (aurigny.com) cost from £82.

Daredevils can go wild on this crazy Croatian adventure