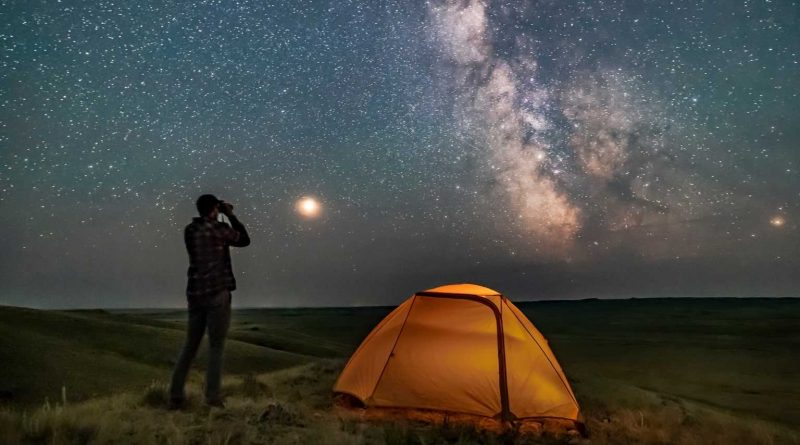 Photographer Rebecca Douglas has always been fascinated by the night sky. Her love of the stars has taken the U.K. resident on “star walking” trips to Iceland and into the Arctic, where she steps out onto darkened trails to capture twinkling constellations and glowing planets in her images.

For nature lovers like Douglas, star walking is turning out to be a welcome antidote for pandemic times. By visiting hills and valleys after sunset, outdoor enthusiasts not only gain all the health benefits of being in nature, they find empty trails unfolding under a limitless night sky.

Hiking at night isn’t uncommon. Plenty of people hike after dark to get to campsites or watch the sunrise from a mountaintop. Star walking goes a step further by blending hiking with stargazing. Rather than heading to an observatory or setting up a telescope in your backyard, star walking takes you on a brief journey to look at the stars from different viewpoints.

Now is the time to try a post-sunset stroll. March 20 marks the vernal equinox—the first day of spring in the Northern Hemisphere, when day and night are about equal in length. After that, nights get shorter into summer.

Why go on a star walk?

Whether you’re standing on a mountainside with the landscape’s silhouette framing the moon or gazing out over a darkened lake with stars reflecting on the water, star walking is often much more dynamic than traditional stargazing.

“[An observatory] is no substitute for getting out into a rural landscape under a blanket of stars,” says Gary Lintern of Stargazing Nights in Durham, England, who leads guided nighttime hikes. “It’s a magical experience, and I enjoy sharing it, especially at some of my favorite locations, like the High Force Waterfall,” England’s largest cataract, in Teesdale.

What’s more, star walking is good for you. There are plenty of studies that show the health benefits of being in nature. Spending at least two hours a week outdoors, particularly while engaging in activities that involve “effortless attention,” can decrease blood pressure, heart rate, and stress levels.

(Does “forest bathing” really improve health? A skeptic finds out.)

Walking at night has the added benefit of improving sleep, which is important for overall health, says Christina Pierpaoli Parker, a behavioral sleep researcher at the University of Alabama.

Parker says that star walking works on two physiological processes that determine sleep quality. “Movement and exercise, such as relaxing stargazing walks outside, may promote sleep by acting on the homeostatic sleep drive,” which influences the pressure to doze, she says. Additionally, evening strolls may counteract the disruptive effects of increased screen time on the circadian system, the body’s way of regulating the sleep cycle.

Step into the night

So how does an aspiring star walker get started? It doesn’t take much more than a sturdy pair of boots.

“While telescopes and binoculars obviously have their uses, I always encourage people to start with naked-eye stargazing,” says Lintern. “When we focus in on something small [like binoculars], it’s a completely different state of mind compared to just opening up and allowing ourselves to get lost in the infinite expanse of space and letting our minds drift.”

Lintern advises reading up on the night sky before heading out. Free mobile apps, such as Star Walk 2, can help identify celestial bodies and are easy to use—simply point your phone at the sky to reveal a map. Websites like Sky & Telescope and NASA’s Space Place cover the basics, have in-depth explanations on constellations, and offer advice on gear and equipment. Space posts monthly skywatching updates, so you can plan outings around events such as meteor showers.

(Here are 10 spectacular stargazing events to watch in 2021.)

Once you’re familiar with what to look for, visit the International Dark-Sky Association (IDSA) for a list of places to go. Since 2001, IDSA has been working with locations around the world to counteract light pollution, which is only getting worse.

Stellar spots in the U.K. include the Yorkshire Dales, with its rolling hills. To find one of the U.K.’s darkest places, head to the Scottish Dark Sky Observatory. Perched on the northern edge of Scotland’s Loch Doon, the area’s lakeside mountains frame a magical view of the heavens.

In the United States, national parks are great options for inexperienced night hikers. Many offer guided outings that explain the importance of protecting night skies. Those with a few walks under their belt may want to try Glacier National Park in Montana; here, the rugged Rockies make an iconic backdrop to a twilight view.

Normally overcrowded during the day, Big Bend in southwest Texas and the Grand Canyon in Arizona are tailor-made for nighttime hiking. These International Dark Sky Parks are ideal backdrops for catching the quadruple conjunction in the pre-dawn hours of March 9-10. That’s when Mercury, Jupiter, and Saturn will appear in a straight line, at an angle to the crescent moon.

Colorado’s Sangre de Cristo International Dark Sky Reserve is the ultimate spot for stretching your legs. At over 3,000 square miles, the reserve is poised to become the world’s largest dark-sky designated area.

If national parks and other dark-sky designated areas are out of range, check local astronomy clubs and observatories for guided sessions. Sites like the International Astronomical Union are useful for finding resources by area. The union’s national coordinators can provide details on programs in specific regions around the world.

(These are the world’s best stargazing spots.)

Whether you go with a group or venture alone, it’s important to be safe. Beyond the obvious (take a flashlight and water; wear a mask and maintain six feet of distance, if you’re with others), guide Dafydd Wyn Morgan of the Cambrian Mountains Initiative recommends taking trails you’ve walked during the day. He also suggests hiking with a buddy and letting someone at home know the details of your outing.

At the end of the day, the best advice is to take it slow and enjoy the journey.

“With all of the chaos that’s happening around us and how disorientating that is, the one constant has been the night sky,” explains Douglas, who has been exploring popular places nearby, such as the cliffs in Ramsgate, Kent, long after the crowds have gone home for the day. “Walking is quite a mindful way of looking up and being reminded that, although everything feels so different, some things are still the same.”

Ryanair and Wizz Air WON’T be fined over hand luggage policy – do you think they’re fair?