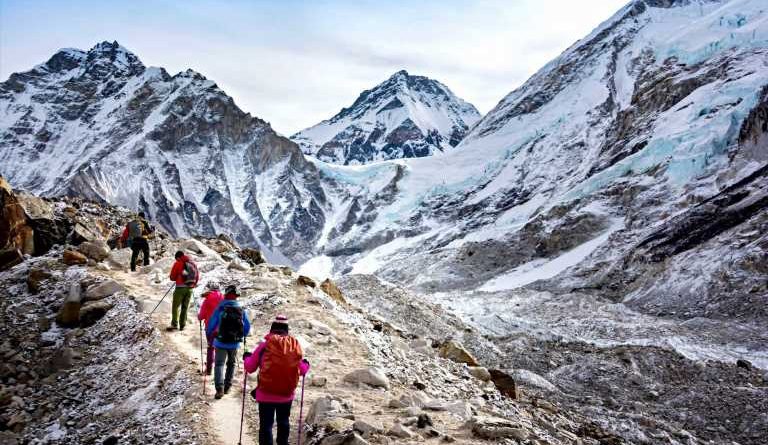 Three vertical miles above the Indian Ocean, eight days by foot from the nearest road, the hamlet of Dzongla sits in a windswept, snow-streaked pass beneath Mount Everest. On either side, Lobuche peak (20,075 feet) and Cholatse (21,128 feet) rise so sheerly that they seem to overhang the cluster of stone-walled and tin-roofed buildings below—one of the highest and most remote human settlements on Earth.

For all its geographic isolation, Dzongla is now caught in the midst of a global cataclysm. Since the mid-1990s, the hamlet has transformed from an insular, several-family yak-herding community to a rest stop for climbers and trekkers. By 2020, all six building clusters in Dzongla were lodges, built to accommodate an explosion of international tourism around Everest.

And now—more than a year into the coronavirus pandemic-induced tourism drought that shows little sign of letting up—Dzongla faces an existential crisis.

“If the pandemic goes on like this, then we don’t know what we are going to do,” says local Tshering Tenzing Sherpa, who took out a loan in 2017 to build Mountain Home. With nearly all tourism in the region halted, he and his wife have had no occasion to open the lodge since the pandemic took hold more than a year ago. Meanwhile, their debt has mounted high as the Himalaya.

According to Ang Tshering Sherpa, who summited Everest 10 times before opening Green Valley Lodge in Dzongla, continuing to rent the land on which his lodge sits would be “too risky.” His lodge may be shuttered permanently, forcing Ang Tshering to return to his family home in nearby Pangboche.

“We have a very big problem,” says Passang Futi Sherpa, who along with her husband invested all of her savings and took out a bank loan to build Maison Sherpa in 2018. The couple is now at risk of defaulting on the loan and losing their lives’ work. “If tourists aren’t coming, we are going.”

Fast growth and a perilous descent

Over the past month, Nepal has suffered a devastating wave of COVID-19 infections fueled in part by the B.1.617.2 variant first found in India, which early evidence suggests may be the most transmissible variant yet. Hospitals have been overwhelmed, thousands have died, and cases have been reported as high as Everest Base Camp.

Yet even before this wave, Nepal was struggling under the economic burden of the pandemic, which for the Sherpas of Solukhumbu—the region that contains Mount Everest—has so far proved more devastating than the virus itself.

Between government-enforced lockdowns and hesitance on the part of tourists, Sagarmatha National Park saw a steep decline in visitation in the first five months of 2021, compared to 24,762 in 2019. While climbers returned to Everest this spring, with the Nepalese government issuing a record 408 Everest climbing permits to foreigners, trekkers—who typically account for more than 99 percent of visitors—did not.

(Here’s how COVID-19 spiraled out of control in Nepal.)

“The expeditions do employ a lot of people,” says Pasang Tshering Sherpa, owner of Himalayan Lodge in Gorak Shep, the last settlement before Everest Base Camp. “But for the lodges, we need trekkers to survive.”

Many locals say the economic consequences of the pandemic outweigh those even of the 2015 earthquake, which damaged or destroyed most homes in several villages.

“During the earthquake, most of the houses were down, but still after rebuilding there were chances to make money,” says Tshering Wanchhu Sherpa, a mountain guide and lodge owner in Kunde, who is now mired in debt. “But after the pandemic…nothing.”

With the spring season now ending, locals will need to find a way to make ends meet at least until September, when the fall season typically begins. Many are not sure how they will manage.

“The first three or six months—it was OK,” says Lopsang Sherpa, who took out a hefty loan in 2013 to build a two-story lodge in the former yak herding village of Chukhung (at 15,500 feet). “But after one year—[it was becoming a] problem. Before, we saved a little money. It’s already gone.”

When Lopsang was born in Chukhung in 1982, roughly 5,000 tourists visited Khumbu per year, and his parents made their living herding yaks. In 2000, 25,000 tourists visited, and his parents opened a teahouse and dormitory. By 2013, when Lopsang took out a loan to build Khangri Resort Lodge & Restaurant—a two-story compound that offers private rooms, Wi-Fi, and western foods—35,000 visited. And by 2018, this number had swelled to 58,000.

“Everybody invested big with lodges,” says Lopsang, explaining that many locals took out loans in the 2010s to start small businesses, often building over ancestral agro-pastoral lands.

“Every year, more, more, more, more,” says Mingma Sherpa, chairperson of the Lodge and Hotel Association in Namche Bazaar—a village of 53 lodges and fewer than 2,000 people.

The price of entry was steep. The villages of the Everest region are all several days by foot from the nearest road, and construction requires transporting materials by porter, pack animal, or helicopter. Flying a single ton of equipment from Kathmandu to Dzongla costs roughly $3,000, far more than most Nepalis earn in a year. To build Mountain Home—a small lodge of 15 rooms—cost Tshering Tenzing roughly $170,000, nearly all of which he borrowed.

“If this continues, then most of us will be leaving,” says Tshering Tenzing, who was born down valley in Namche Bazaar.

Impacts of a tourism drought

Herders have also fallen on hard times. In normal years, they would use donkeys, yaks, and dzos—a hybrid between a yak and a cow—to shuttle equipment for climbers and trekkers. Since the pandemic began, clients are few and far between, and rates have dropped by almost 50 percent.

“All the time, we give the animals hay, we give them potato, but [there are] no jobs,” says Kami Chhiring Sherpa, a dzo herder from Khumjung.

When asked how he would provide food for his wife and two small children over the coming months, Dawa Kaji Sherpa—an unemployed dzo herder and mountain guide—rubbed his neck and shifted uncomfortably in his chair.

“I’m confused about this,” he says, admitting he had already received assistance from friends who themselves had little to give.

Many other sherpas are facing similar pressure. Rita Dorjee Sherpa, 23, is the sole breadwinner for his four-person family in Khumjung. A trekking guide, Rita Dorjee led trips around Everest and in Japan prior to the pandemic, but due to the tourism drought and border closures he has had virtually no income for more than a year.

Community is a key to survival

The staple crop around Everest is the potato, harvested once per year in the fall. Last year’s harvest was 40 percent lower than usual, which many locals attributed to a heavy and erratic monsoon season—an expected consequence of climate change. If tourism doesn’t pick up next fall, and if the crop is poor again, Rita Dorjee does not know how he will feed his family.

In the absence of tourists, locals may have to fall back on traditional subsistence activities, like growing crops and herding animals. Some fear that their communities are not prepared for this.

“If coronavirus continues like this, we’ll be back 25 years,” says Lopsang. “That’s a big problem, because our old habits are already gone.”

Ang Tshering Sherpa, who owns a struggling lodge in Khumjung, singles out a generational predicament. “The young are more educated than the older people,” he says. “They are not very much interested in taking care of animals.”

“Tradition may disappear,” says Lakpa Tshering Sherpa, a 30-year-old schoolteacher in Thame who says most of his peers make their money doing seasonal work on Everest.

Other Sherpas believe that their strong social fabric will be the key to enduring.

“We help each other,” says Jigmey Gyaltsen Sherpa, a Buddhist monk in the village of Lukla, where most treks in Khumbu begin and end. “The suffering of others we can take for ourselves. Our happiness we can give to others. Taking and giving: We have lots of practice with this in Sherpa culture.”

“Everybody has problems, but the main thing is we are in a good society,” says Ang Tshering Sherpa, an assistant trekking guide from the small village of Kunde. Ang Tshering has had no clients since the pandemic began, yet he smiled outside a traditional funeral ceremony that friends and family had come from as far away as Australia to attend. “The community is strong, helping each other.”

Many put their faith in the natural beauty of the region, which the few tourists this year had to themselves.

“I feel lucky to come,” says GR Radhika, who is attempting to become the first woman from the Indian state of Andhra Pradesh to climb the highest mountains on all seven continents. “Wherever I go, I’m alone.”

“Now we have time to share stories with the locals,” says Czech trekker Jan Cermak, who visited with his twin brother. “The Sherpas’ stories are just amazing.”

Locals are confident that one day, people from around the world will again flock to gaze up at the highest mountains on Earth, to follow in the footsteps of the snow leopard, and to learn from the enduring cultural wisdom of the local people and their Buddhist lamas.

Until then, the Sherpas of Solukhumbu will try to hold on.

If you or someone you know is considering suicide, please contact the National Suicide Prevention Lifeline at 1800-273-TALK (8255), text “help” to the Crisis Text Line at 741-741 or go to suicidepreventionlifeline.org.

How to visit Cologne for under £100 a night