I’d never stayed in a Travelodge before. But when I was sent a ‘golden key’ inviting me to try out its new ‘premium’ super rooms the invitation was almost too tempting to refuse.

To be honest, it was during that tedious, oppressive summer heatwave and the promise of overnight air conditioning was what really sealed the deal and had me trek east to their London City branch. You know me, if there’s just the slightest sniff of luxury then I’m all for it.

The just-launched ‘Travelodge Plus’ rooms boast an ‘enhanced budget chic vibe’ throughout, and before my arrival much was made of their ‘tranquillity zen’ colour scheme, which is one of the many reasons they ask you to pay an additional £10-20 more than a standard Travelodge room, which start from £29. 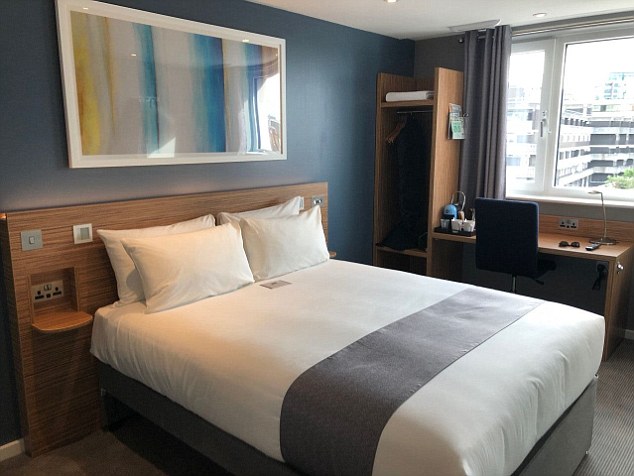 William says: ‘Another reason to apparently spend that little bit extra for one of the new super rooms is to enjoy new “bespoke pixel wall art” that “showcases leisure destinations in London and the Scottish highlands”. Can you work out which leisure destination that is?’ 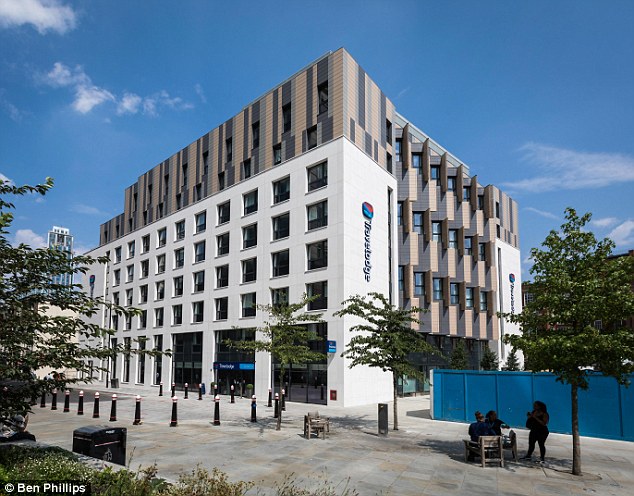 You may ask yourself – indeed, as did I – what exactly is tranquillity zen?

Is it the one in-between Cook’s Blue and Plummet at Farrow and Ball? Put that colour chart down: let me save you the search – it is not.

The standard rooms are painted a fairly insipid shade of sage, but the new premium rooms have got a feature wall (like it’s 2001) in a faded air force blue, with all other walls painted in ‘serenity beige’. Gorgeous.

The new grade of rooms also have USB ports by each side of the bed, and this is much discussed in the marketing bumph. Well done, Travelodge.

This is something many hotels – catering for all levels – added in three or four years ago. This should not be a marketing feature for any hotel. 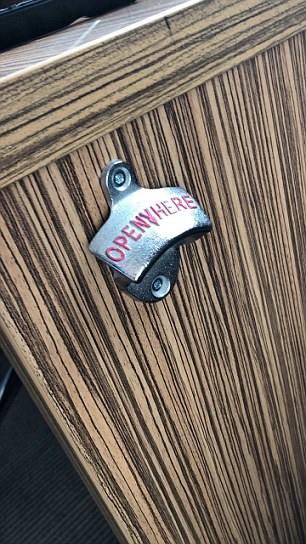 William was particularly impressed with his room’s built-in bottle opener (pictured). Though these are standard

Another reason to apparently spend that little bit extra for one of the new super rooms is to enjoy new ‘bespoke pixel wall art’ that ‘showcases leisure destinations in London and the Scottish highlands’.

Right. Can you work out which leisure destination that is?

Unless my artwork was meant to be the littoral zone of Loch Ness then I’m out of guesses.

My favourite touch, and this is apparently not unique to the super rooms, was the in-built bottle opener to the side of the desk.

There’s no special zone for the breakfast the morning after. You are back with the regular punters, but the bar-café has been revamped and now includes a ‘statement bar’. It certainly made a statement.

Okay, I get it. I am probably not the market they are going after – but I don’t understand why budget hotel chains, not just Travelodge, fail to offer such basic hospitality standards to all their guests.

Whilst my room was very clean, although I was the very first guest to ever stay there, so you’d hope it would be, why were there no pillow protectors on the pillows?

Who thinks it’s okay to make guests rest their heads on pillows that god knows who else has used before and have gathered all sorts of sediment and germs? Do they think that a standard level of hygiene is only the reserve of higher grade hotels?

Why in 2018 is there a charge for wifi? Great – the first 30 minutes are free, but your average businessman will need to use the internet for longer. By all means make people sign up to your newsletter to enjoy the wifi but in this day and age charging for wifi is borderline criminal.

By Travelodge’s own admission it is trying to capture the ‘premium economy’ equivalent hotel guest with its new super rooms.

For me this makes little sense to have the two-tier room system. Why not just make all the rooms ‘super rooms’ but just call them ‘rooms’?

The new additions are hardly worth making a fuss over and should be rolled out throughout all their rooms not just a small selection.