It may rank high on the list of destinations for stag and hen dos, but Amsterdam has so much more to offer than an inebriated weekend browsing its (in)famous coffee shops. The last few years have seen a wave of new hotels arriving in the city, seriously expanding the range of interesting options to stay within – and, most encouragingly, beyond – the well-trodden cobbled streets of its immediate historic core. Even existing properties have been dealt a much needed jolt and upped their game.

Having grown up here, I’ve watched this happen as I come back now every couple of months, walking past construction sites that give new life to listed buildings and, where possible, bring in something new altogether. Here are 10 of the best hotels in Amsterdam at the moment. 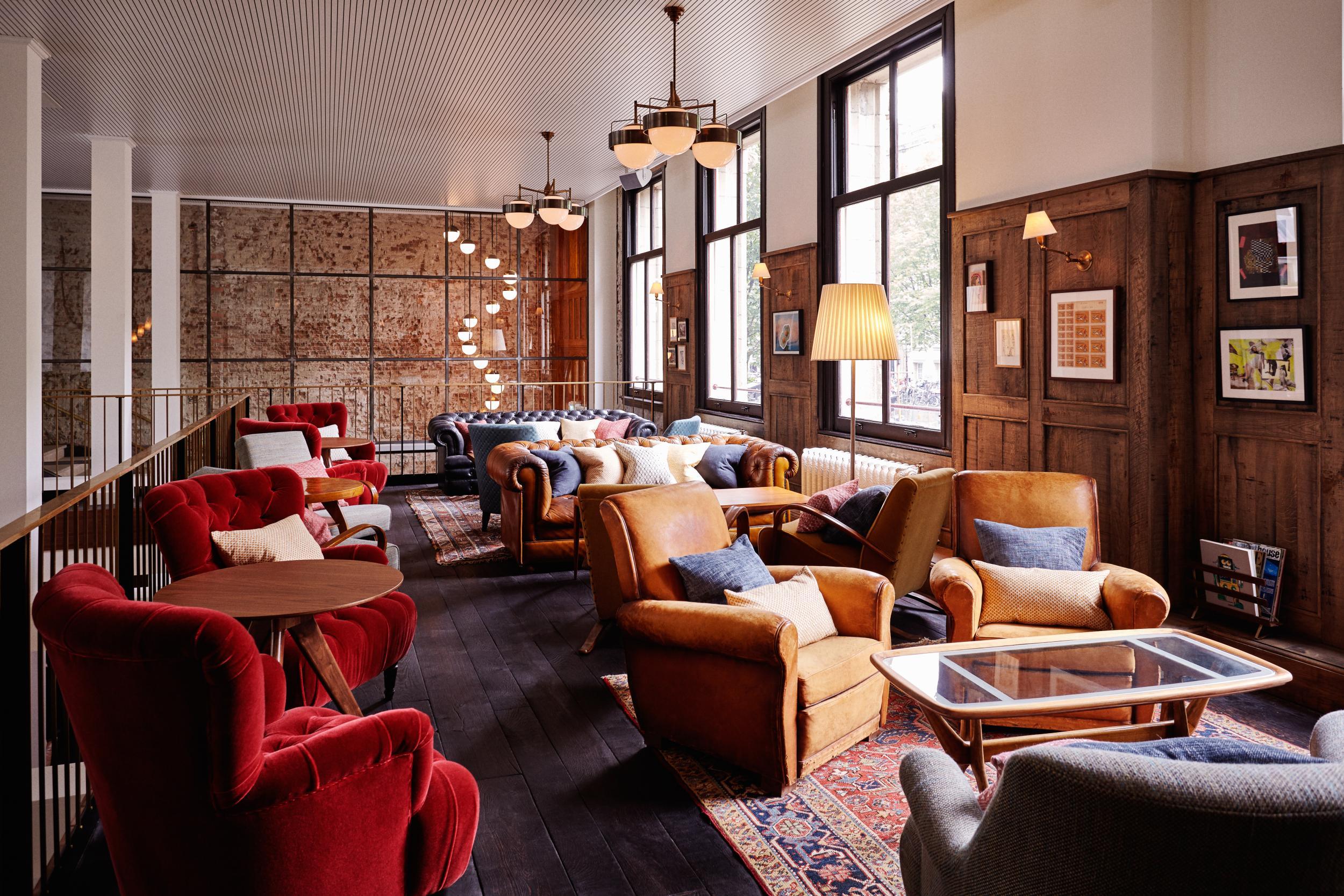 This was the first international venture for the Hoxton hotel group when it opened in 2015, branching out from its namesake area in east London. Walking into the lobby on Herengracht canal, the Dutch capital feels like a natural fit for the brand’s relaxed vibe, with vintage furniture in reds, yellows and blues contrasting against dark wood floors and exposed brick.

At the heart of the hotel’s ground floor is brasserie Lotti’s; upstairs there are 111 rooms, with the same dark wood floors, tan leather headboards and pale green and deep blue on the walls. They range from Shoebox to Roomy; there are also three unique “concept rooms” (Fruity, Floral, and Tubby – the first Hoxton room with a bathtub). The hotel’s location in De Negen Straatjes (Nine Streets) area means there is loads to see and do on your doorstep, while much of the city is only a stroll away. 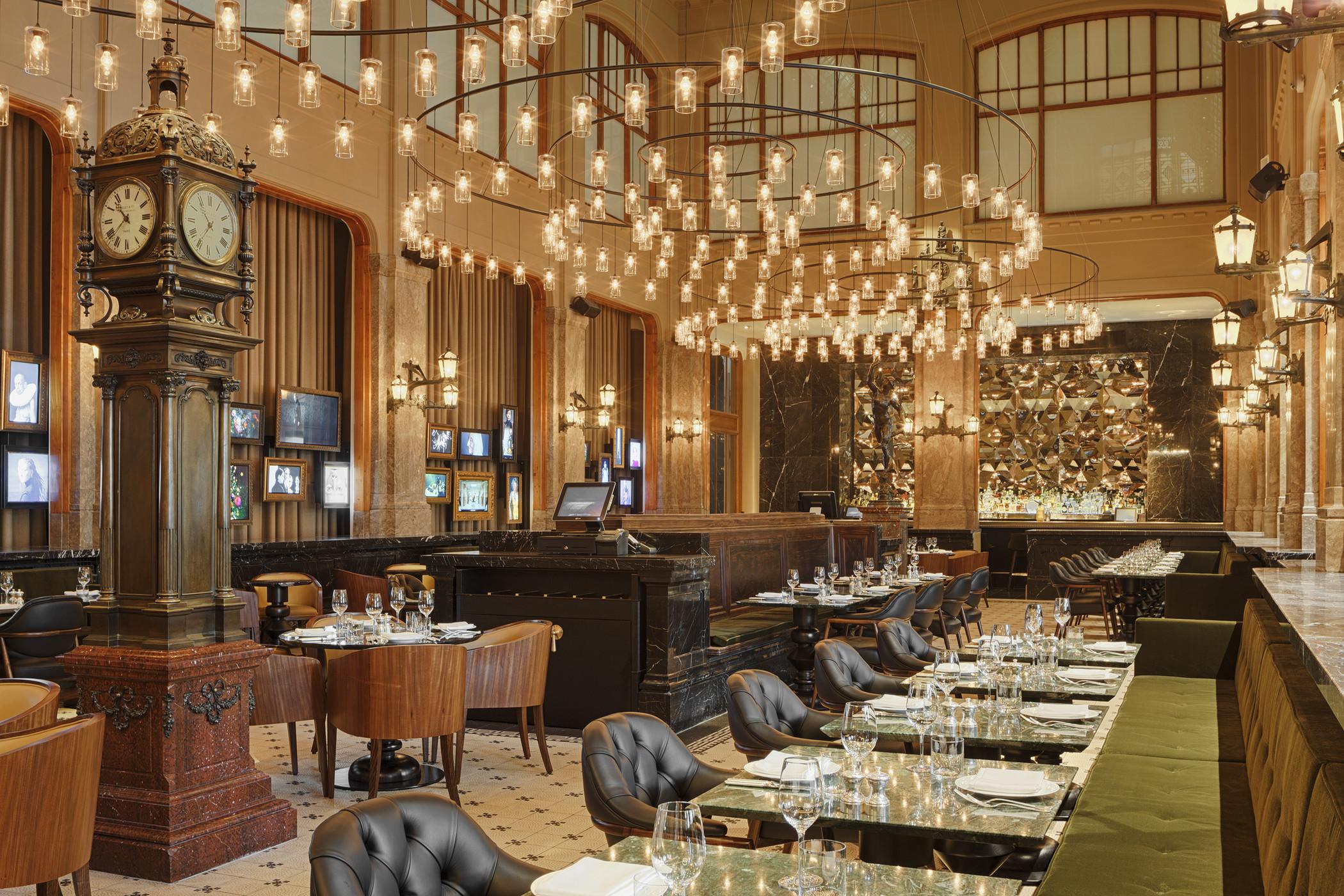 Not one to do things under the radar, W Hotels arrived with a bang in 2015, occupying two buildings: a former telephone exchange and a bank, which square off against each other across the street, directly behind the Royal Palace. An extra, glass-walled floor was added to the exchange building, housing the reception, lounge, and a steakhouse – not to mention a narrow outdoor swimming pool for those brave enough to swim surrounded by guests at the bar.

The 238 rooms and suites are classified by, and take design inspiration from, their respective buildings and the city – think copper-pipe pendant lighting, a gilded miniature bank vault as the minibar, and toilet cubicles painted bright orange. Restaurant The Duchess occupies the hall of the bank, burgers are served at local favourite The Butcher. There’s also a gym and spa, as well as a retail and exhibit space.

Doubles from €300, room only
wamsterdam.com 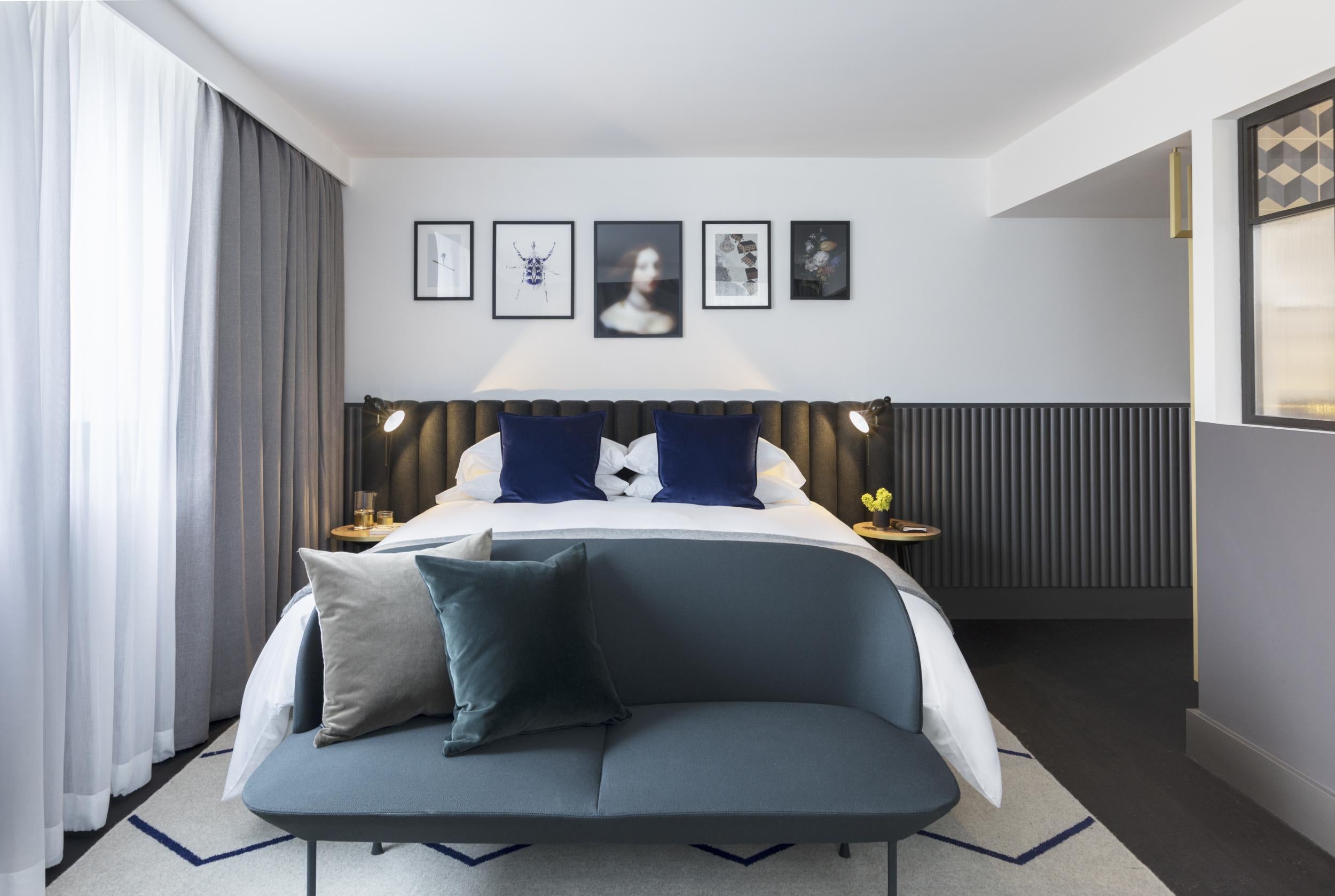 Kimpton’s first hotel outside the US can be found on Nieuwezijds Voorburgwal, just minutes from Centraal Station – it’s a revamp of a dreary Crowne Plaza and opened in 2017.

Don’t be put off by the nondescript exterior: rooms are seriously stylish throughout (there are 270 in total, with strong blues playing off whites and greys; a junior suite with pitched roof and exposed beams is big on charm), and the hotel incorporates a number of 17th-century buildings, including Little House – the childhood home of Dutch playwright PC Hooft transformed into a three-floor suite. The moody cocktail bar is worth a stop too.

Doubles from €289, room only
kimptondewitthotel.com 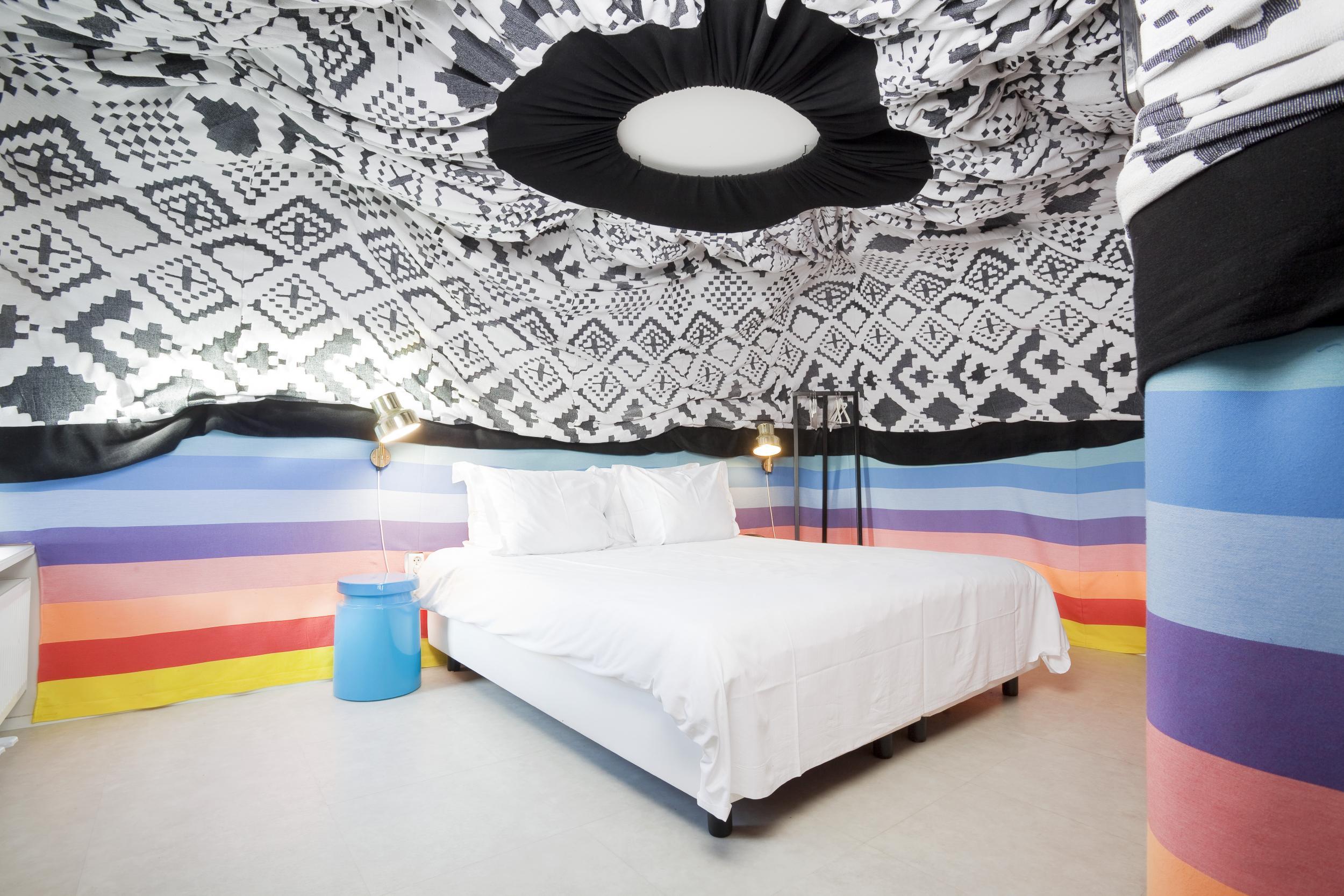 Travelling with friends and can’t decide on budget? The Exchange – like its loftily-monikered sibling Lloyd Hotel & Cultural Embassy – solves your problem by offering one-star to five-star hotel rooms under one roof. All unique, they were designed by students from the Amsterdam Fashion Institute using the theme “rooms dressed as models”. They didn’t hold back – the Eighties Room, for starters, displays an oversized black and white patterned sweater with candy-coloured stripes along the walls.

You’ll find The Exchange on Damrak, the street that connects Centraal Station with Dam Square, opposite the former stock exchange. The area’s about as tourist-central as you can get, worth bearing in mind for those preferring a quieter location. 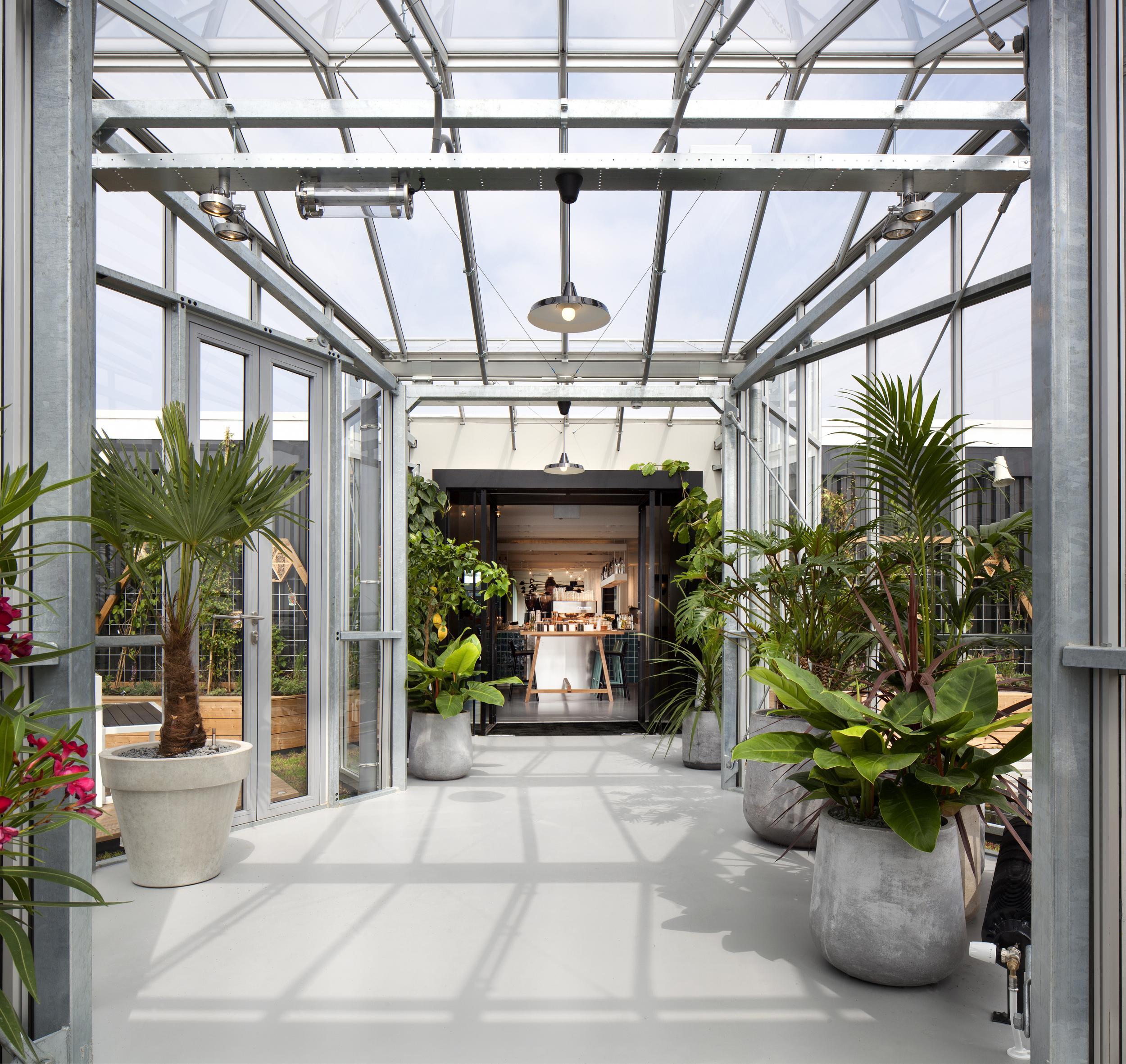 Like citizenM before it, Zoku is a new Dutch brand with plans to shake up the hotel industry on a global level. Its first location is on Weesperstraat, in the southeast section of the canal belt, roughly midway between the Hermitage and Artis Zoo.

On the top floor are social spaces both practical (communal working areas, launderette) and light-hearted (games corner, hanging punching bags for excess energy release), while Zoku’s “Community Manager” and their “Sidekicks” are on hand to help you make new connections, set you up with a VanMoof bike, or point you to the morning yoga class.

Appropriately for a former office building, the majority of the 133 accommodations are its signature “home-office hybrid” lofts. They come in three sizes and have a kitchen, work table and loft-style sleeping space that can be screened off for privacy. 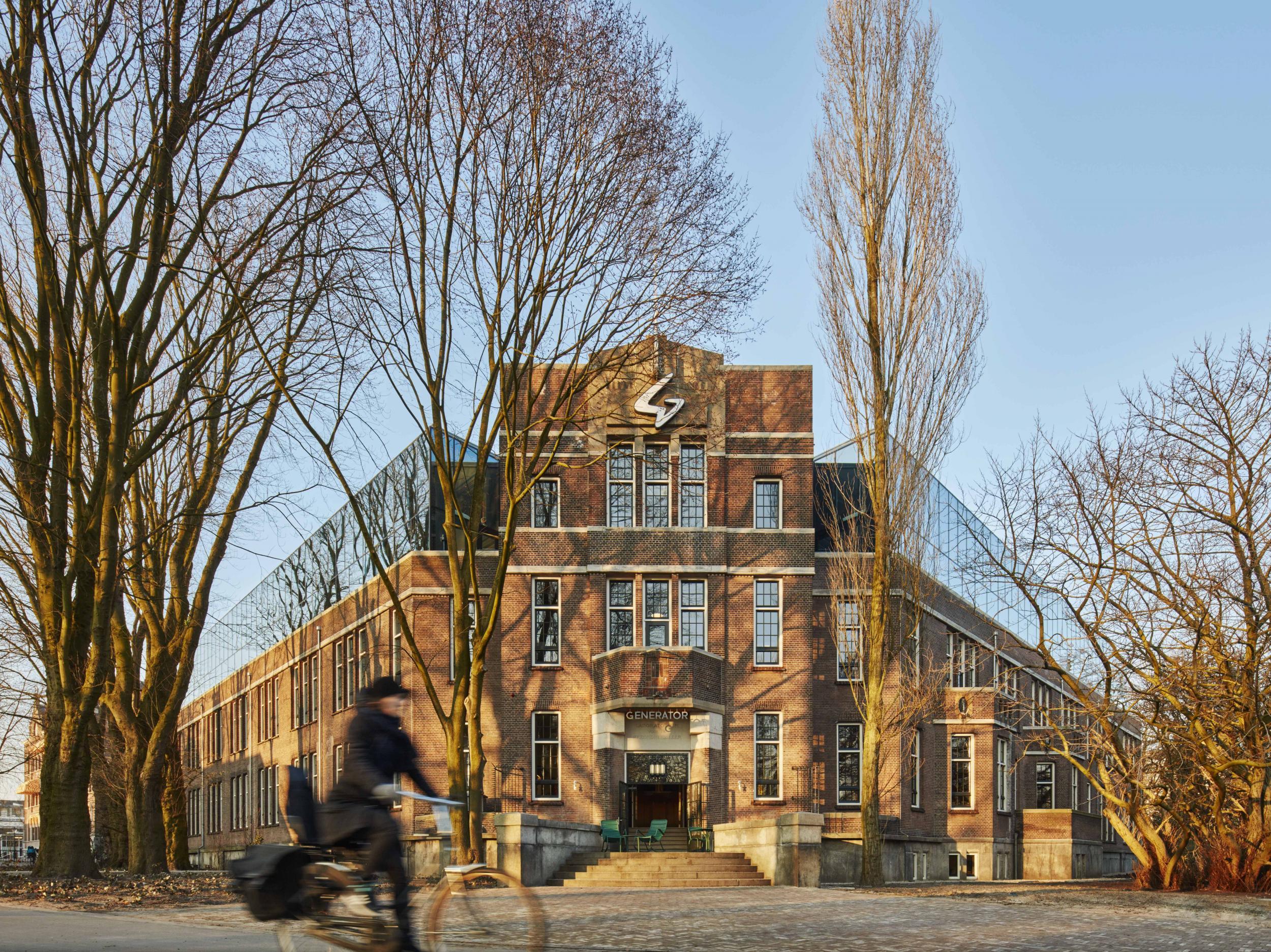 Amsterdam tends to be an expensive city for hostels, but when it comes to stylish digs at affordable prices, you can’t do much better than Generator’s “posh-tel”. You’ll find it near Oosterpark, inside a zoological university building dating back to 1917 – you can play table tennis in the old library, while the bar is in a former lecture hall.

Travel solo and your cheapest option is taking a bunkbed in a quad room; both these and all twin rooms come with private en suite bathrooms. With a group you can opt for the top-floor Sky Suite, which throws in a lounge and kitchen to host up to six people.

Beds from €20, doubles from €75, room only
generatorhostels.com 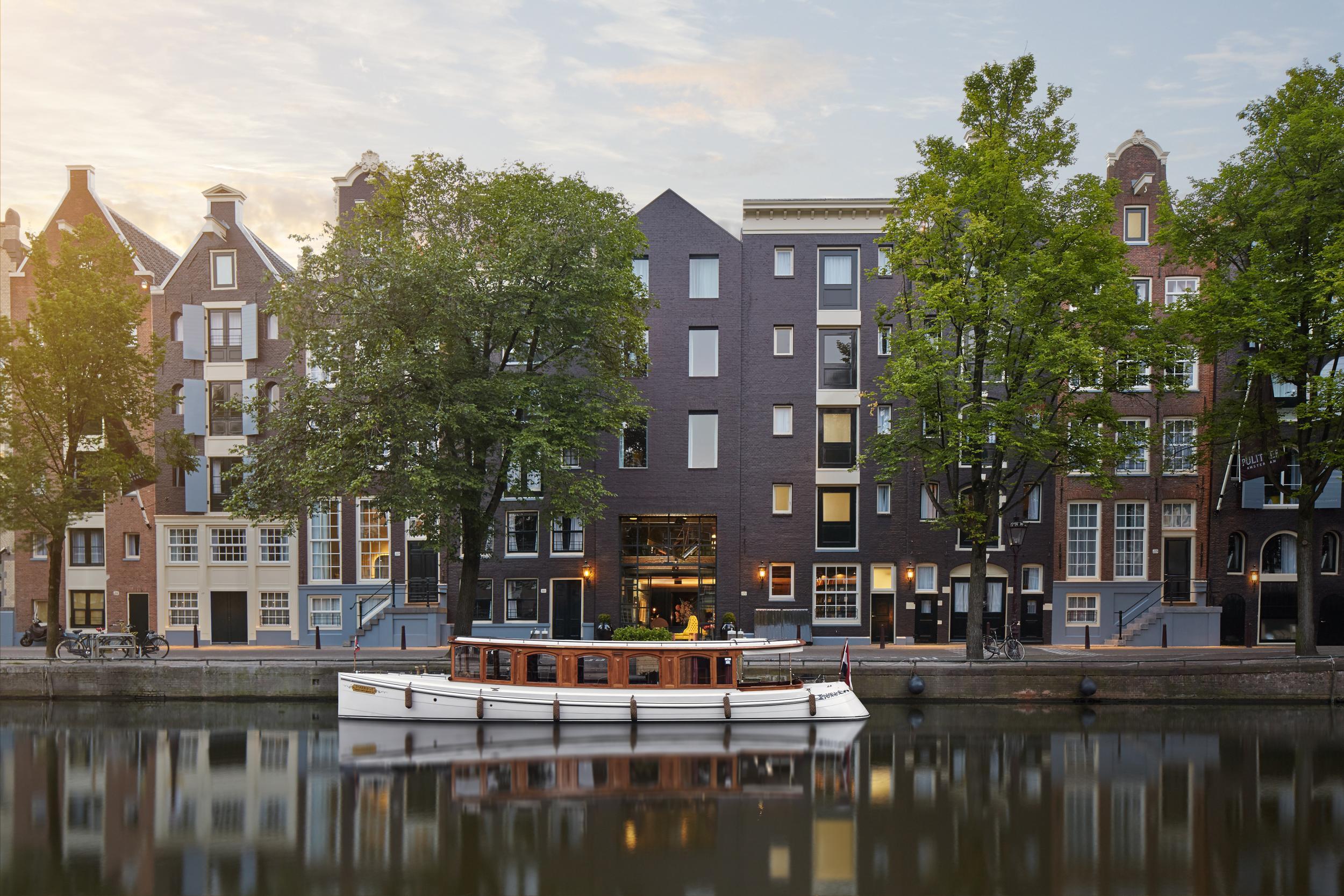 This grande dame – no fewer than 25 canal houses from the 17th and 18th centuries cobbled together – has transformed itself during 18 months of recent renovations, reopening in 2016. Behind the restored Prinsengracht façade now lie 225 rooms dressed in white, purple, light blue and mustard; some suites have their own private entrance on the canal.

The standout feature is the hotel’s private garden, in the middle of it all yet seemingly miles away. Don’t miss wandering the corridors of the hotel; as they twist and turn, you can clearly see the transition from one canal house to the next, with glass-covered passageways offering unexpected views of the city. The hotel’s private boat also offers tour of the city’s canals.

Doubles from €288, room only
pulitzeramsterdam.com 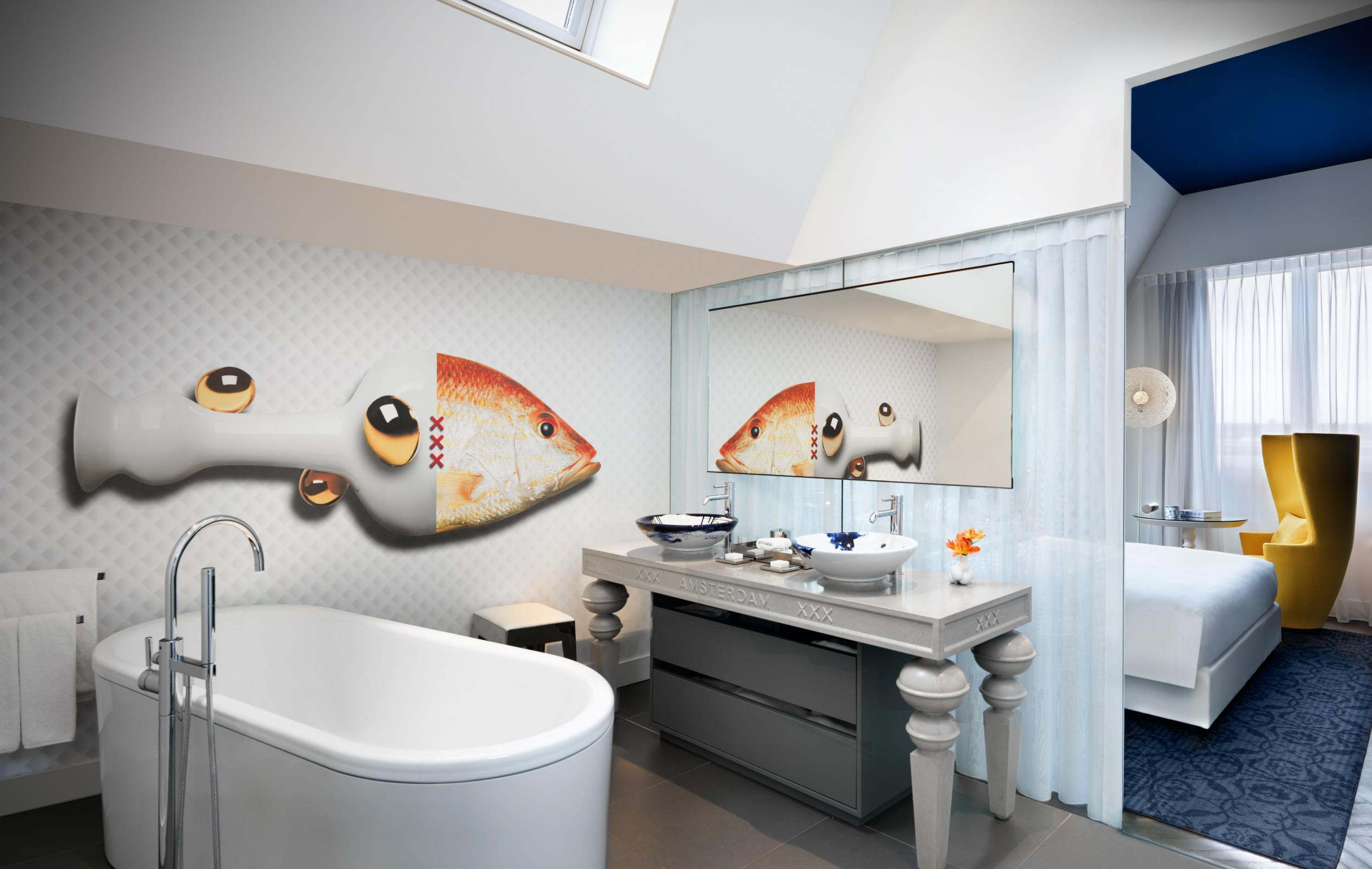 A few minutes’ walk from the Pulitzer, Andaz Prinsengracht’s plain post-war exterior (it used to be a public library) reveals little of the Marcel Wanders-designed interiors inside.

From the giant bells overhead in the lobby to the fish murals and hand-made Delft blue wash basins in the rooms, there’s plenty to see. Go for a room with a terrace to get rare private outdoor space. To see the city, hop on on the complimentary 90-minute Sunday morning cycle tour around town.

Doubles from €350, room only
amsterdamprinsengracht.andaz.hyatt.com 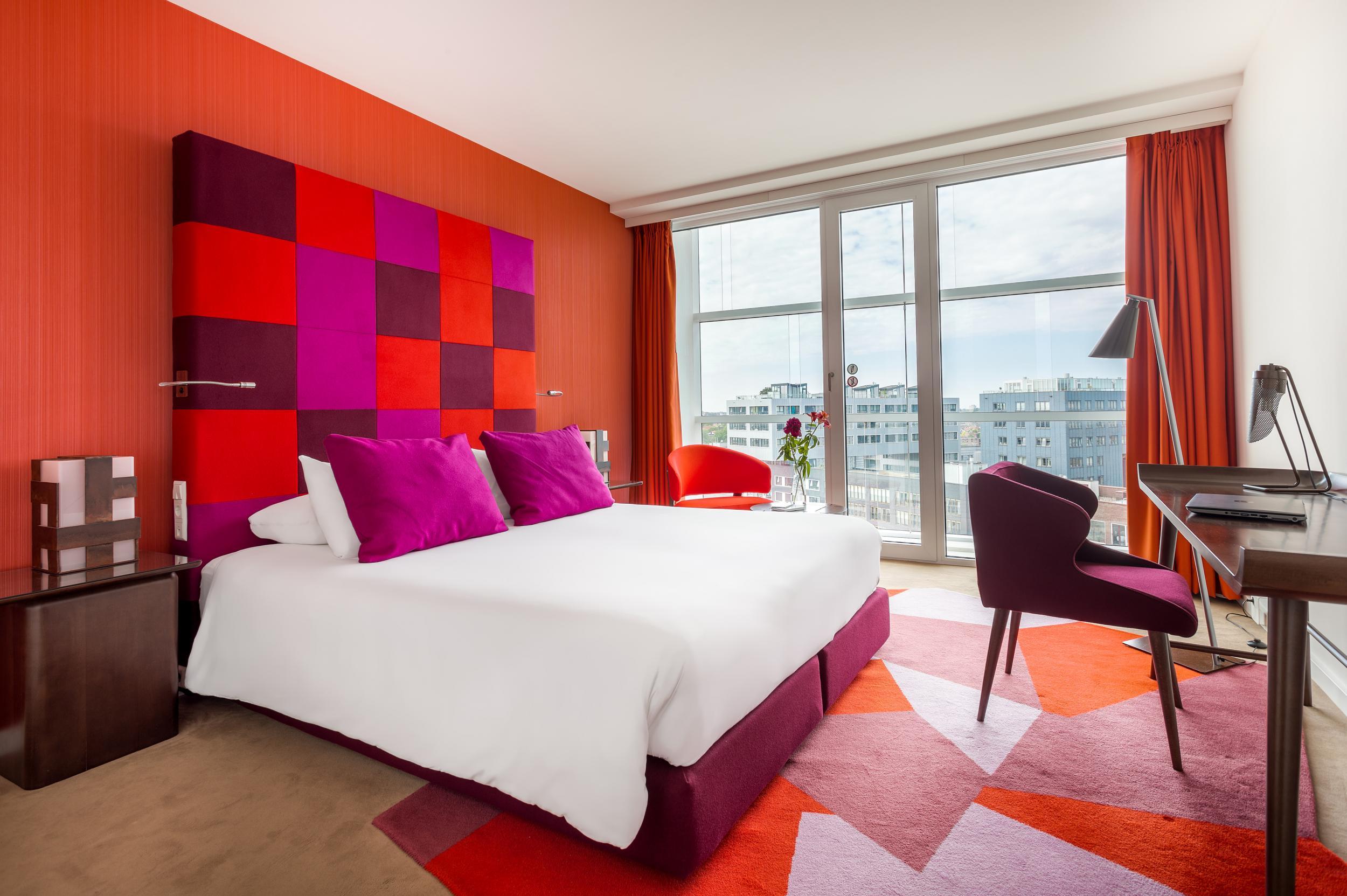 Like living below sea level, building on reclaimed land is nothing unusual in the Netherlands. You can experience both when staying at Room Mate Aitana, the 285-room hotel of the fun, millennial-focused Spanish group built on the IJdok island northwest of Centraal station, beside a pretty marina.

Floor-to-ceiling windows in all rooms are one of the perks of a brand new, glass-and-steel building, while interiors (by Spanish designer Tomás Alía) range from muted greys to apple green, bright red, and deep purple. The bar serves no fewer than 50 types of beer and 10 kinds of gin and tonic. 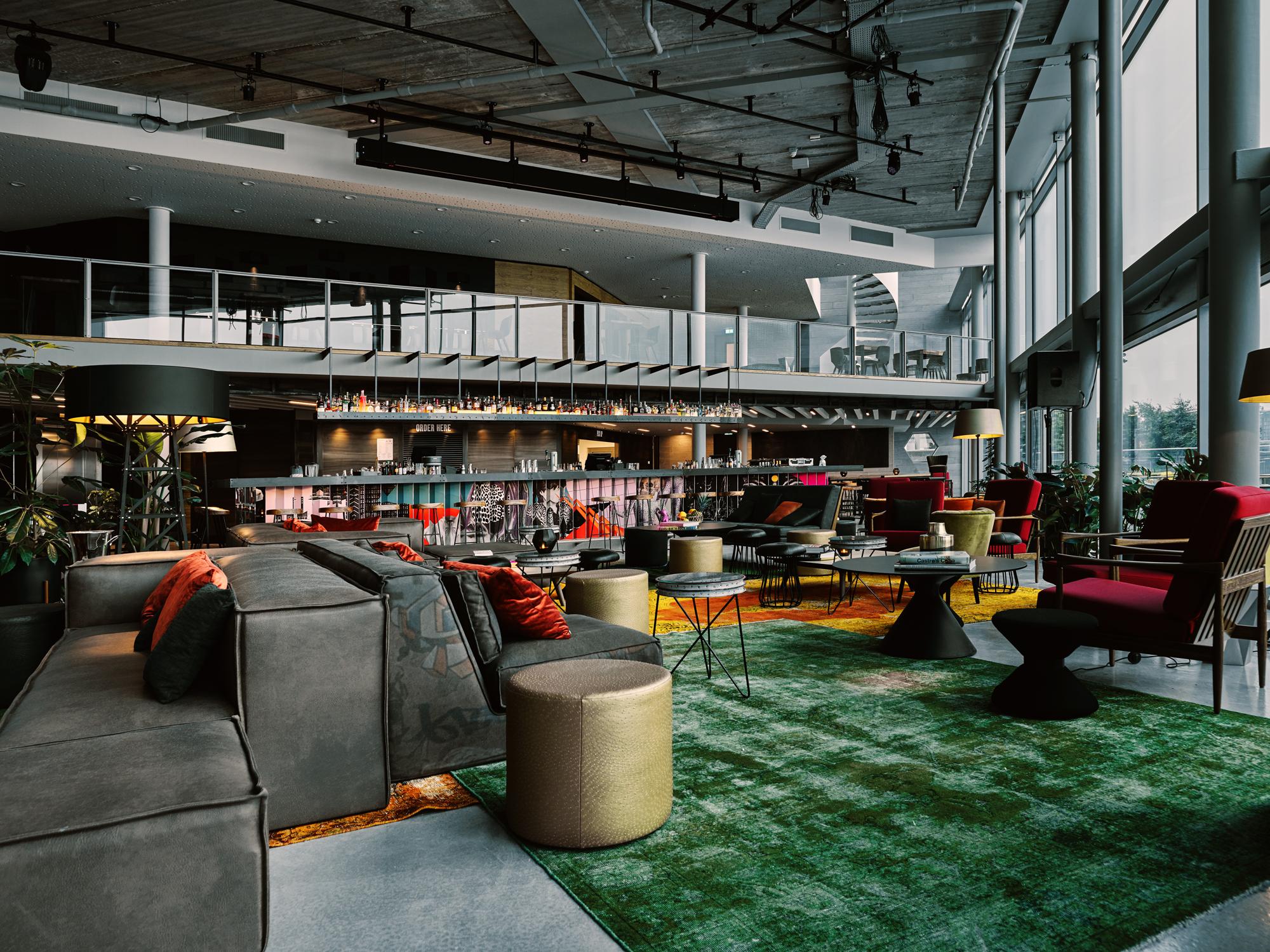 Just across the water from Centraal station (a free public ferry gets you there, alongside local commuters), Sir Adam is the second property of Sir Hotels in the city. While its sibling Albert set up in an old diamond factory, Adam is part of the 22-storey A’DAM Tower, the redevelopment of the former Royal Dutch Shell offices – you’ll find the futuristic EYE Film museum next door.

From here, you have a different perspective on Amsterdam, looking back at the city – especially from one of the higher rooms. The 110 rooms take inspiration from the area’s industrial heritage with bare concrete walls and untreated surfaces. The Butcher Social Club – another outpost of the outlet also found at the W – is open early to late during the week and around the clock on weekends for everything from breakfast to beer/booze and burgers.

Doubles from €125, room only
sirhotels.com

We may earn some commission if you click on a link in this article and buy a product or service, but we never allow this to influence our coverage. 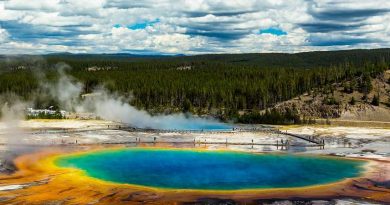 The Best National Parks Around the World for Your Mental Health