Home » Where to stay » 10 of the best hotels in Manchester

Enter any one of the exciting cultural institutions, hip bars, world-famous sporting and music venues, and you’ll be greeted by friendly locals who are fiercely proud of the place they call home: Manchester is a happening and intoxicating city to visit.

I’m one such fiercely proud Mancunian and have watched the city’s hotel scene boom in recent years, meaning visitors have more choice than ever. From independent boutique hotels and budget options to chains with pizzazz, here are 10 of the best spots to lay your head. 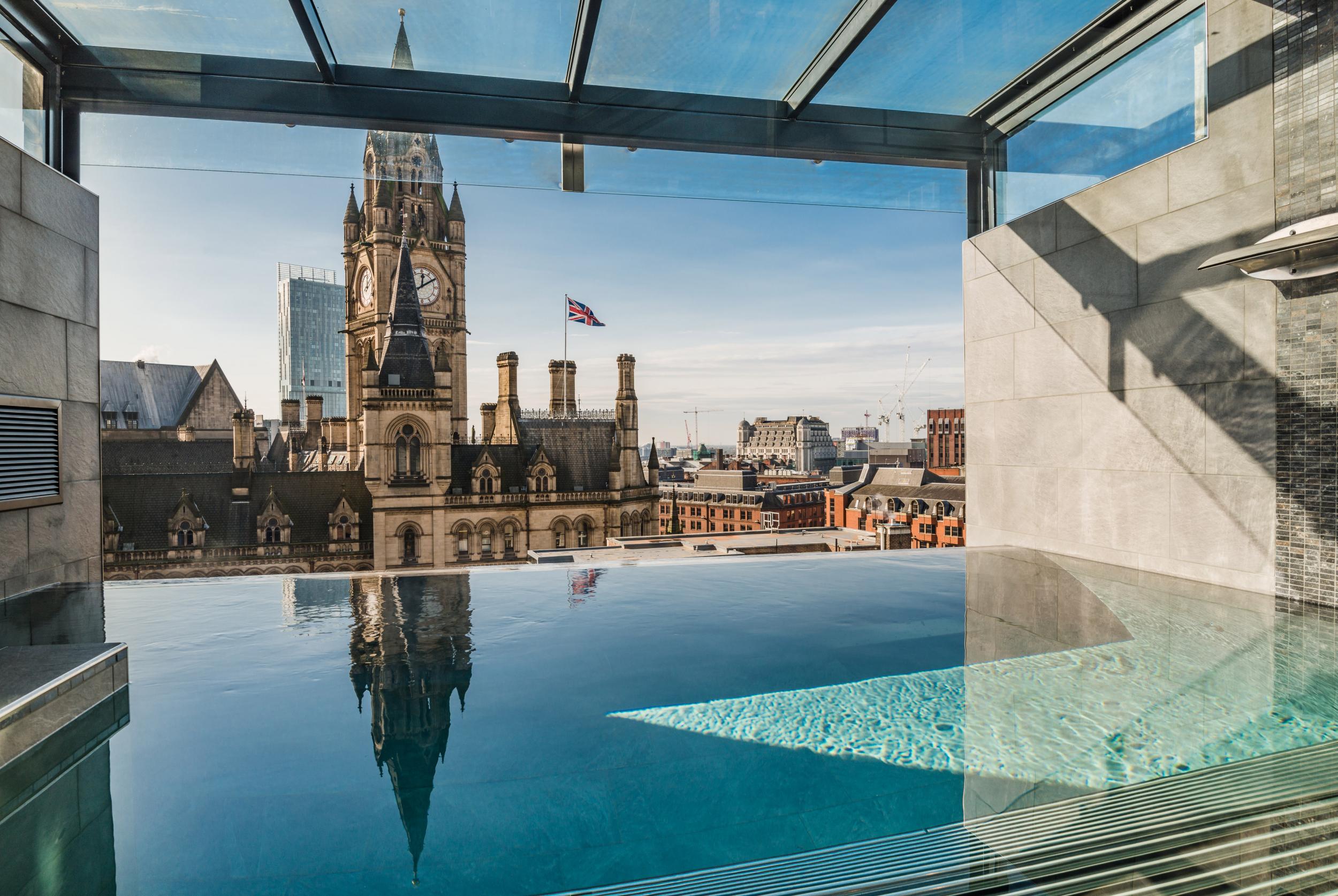 With an infinity spa pool on its seventh floor overlooking Manchester Town Hall’s clock tower, this 40-room hotel is a special retreat in the city centre. Rooms and public areas have been painstakingly put together by owner Sally O’Loughlin – expect locally commissioned artwork, statement lights and wallpaper, and a classic muted colour scheme – and each bedroom is unique. Freestanding baths are in all but entry-level Snug rooms.

Other treats here include spa treatments, a steam room and a dedicated afternoon tea lounge. 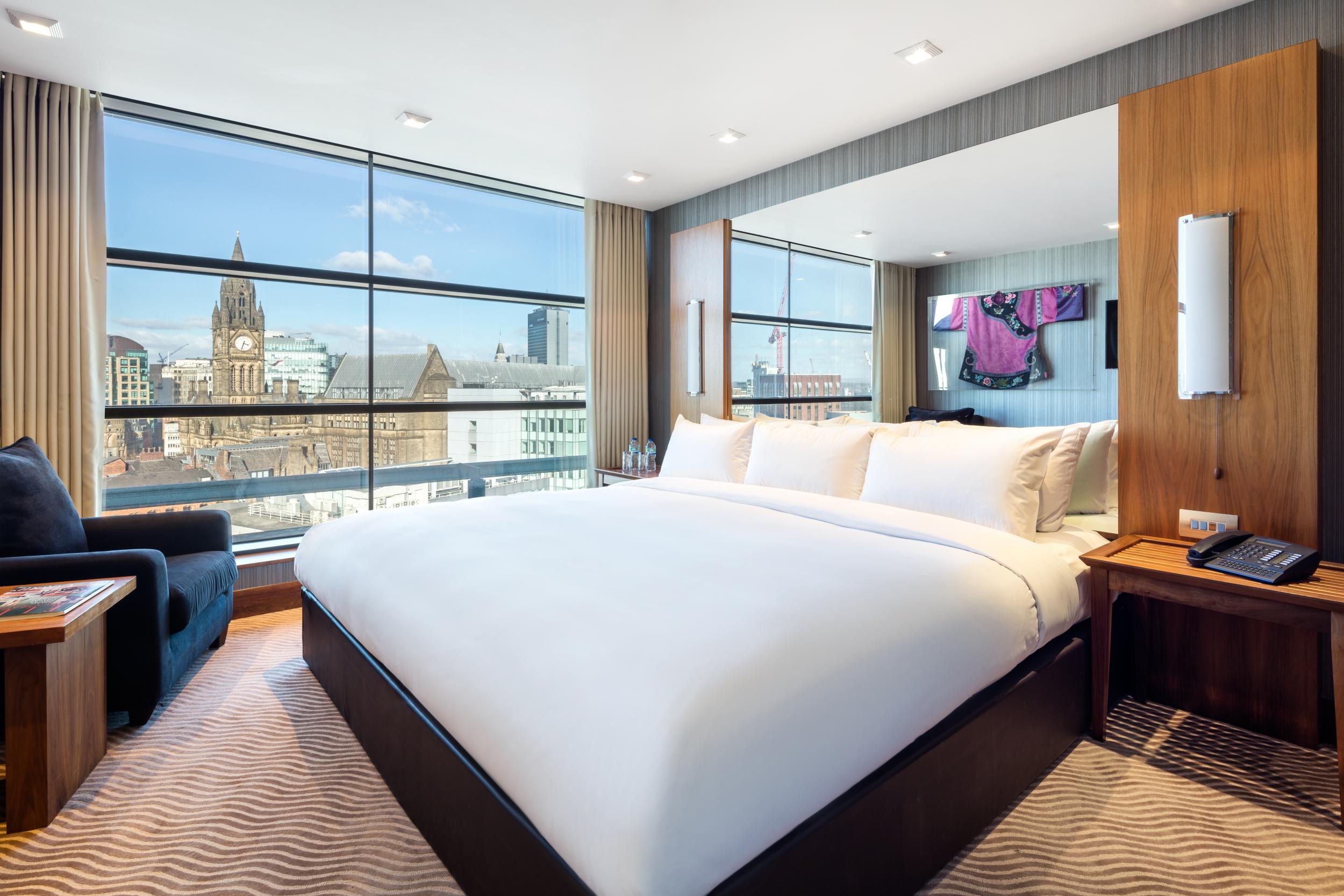 Built in 1853 on the site of the Peterloo Massacre, the grand Grade II-listed Free Trade Hall, home of the Radisson, is steeped in Manchester history. Winston Churchill delivered a speech here while stars including Bob Dylan and the Sex Pistols performed inside when it was a concert venue. Enjoy afternoon tea in the restaurant’s colonnaded area to appreciate the building’s glory.

Bedrooms are in a modern building attached to the hall, have neutral colour schemes, and some have great views of the Manchester skyline. The basement spa also has a swimming pool.

This modern hotel is just a couple of minutes’ walk away from Piccadilly train station and offers simple rooms with all essentials included – free WiFi, coffee and tea making facilities and TVs. Kids up to the age of 12 stay for free with parents, but those aged seven to 12 pay for breakfast.

The stylish bar serves a good selection of cocktails and is themed around Manchester’s legendary music scene, with disco balls hanging from the ceiling and guitars dotted on shelves; while the breakfast area is adorned with golden Manchester worker bees.

Doubles from £89, room only 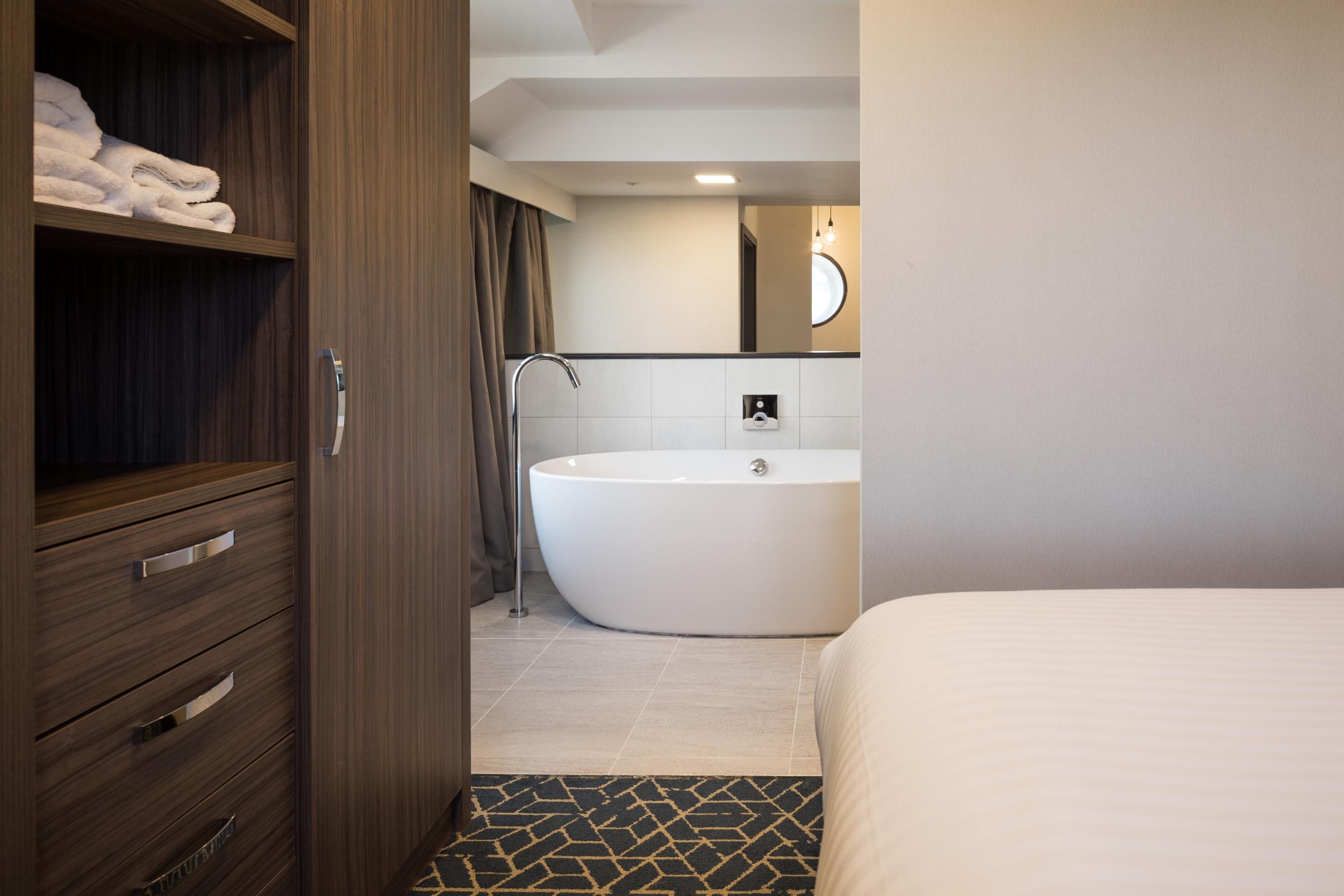 In Exchange Square, home to high-end shops, the busy Arndale shopping centre, and around the corner from the Northern Quarter’s independent boutiques, this aparthotel is perfectly located if you’re visiting for some retail therapy.

The 114 rooms come in different layouts and sizes due to the shape of the quirky triangular building, a former corn exchange, and all have kitchens. Expect to get lost in the long corridors while admiring original features such as grand stairways and tiles.

Doubles from £89, including a grab and go breakfast 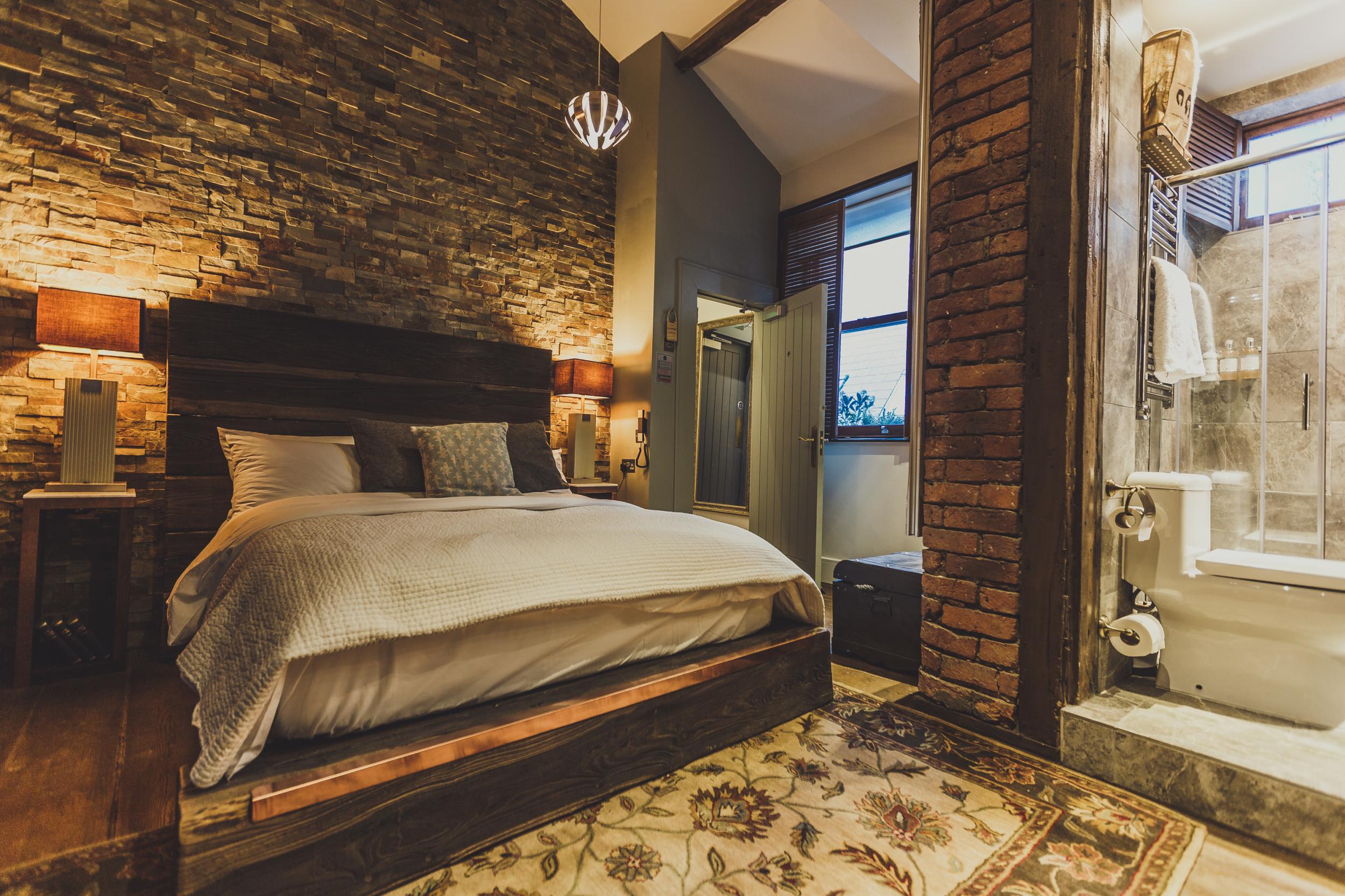 This stylish boutique hotel is located in Manchester’s hip Northern Quarter and is surrounded by bars and restaurants. Free prosecco and antipasti is served between 6pm and 8pm to put you in the mood for a night out, and there’s complimentary milk and cookies before bed.

The 16 rooms aren’t enormous, but are as cool as their surroundings with high-end bronze rainfall showers, king-size Hypnos beds and marble fireplaces. Ren toiletries and a hair styling kit are thoughtful in-room touches, and it offers free Netflix too.

Doubles from £89, including a continental breakfast bag 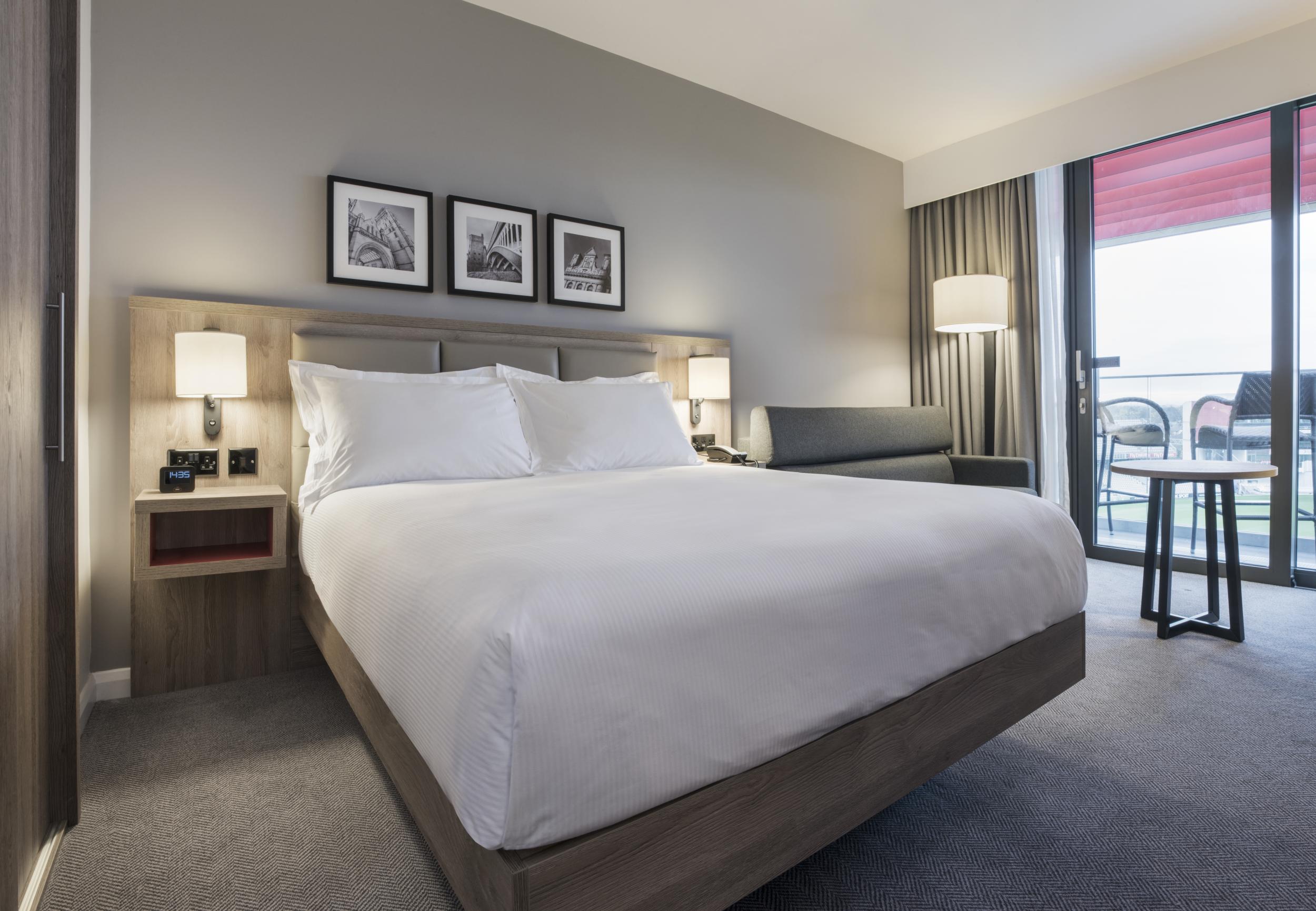 Imagine flinging open your curtains to look out over Old Trafford cricket pitch – that’s the unique view from 85 of the rooms in this hotel in Emirates Old Trafford. On match days, you’ll have one of the best views from the room balcony, and overnight packages are available when a concert is held at the stadium too.

The hotel itself is light, bright and modern – it only opened in August 2017 – and rooms have a calming neutral colour scheme, but feel slightly uniform. 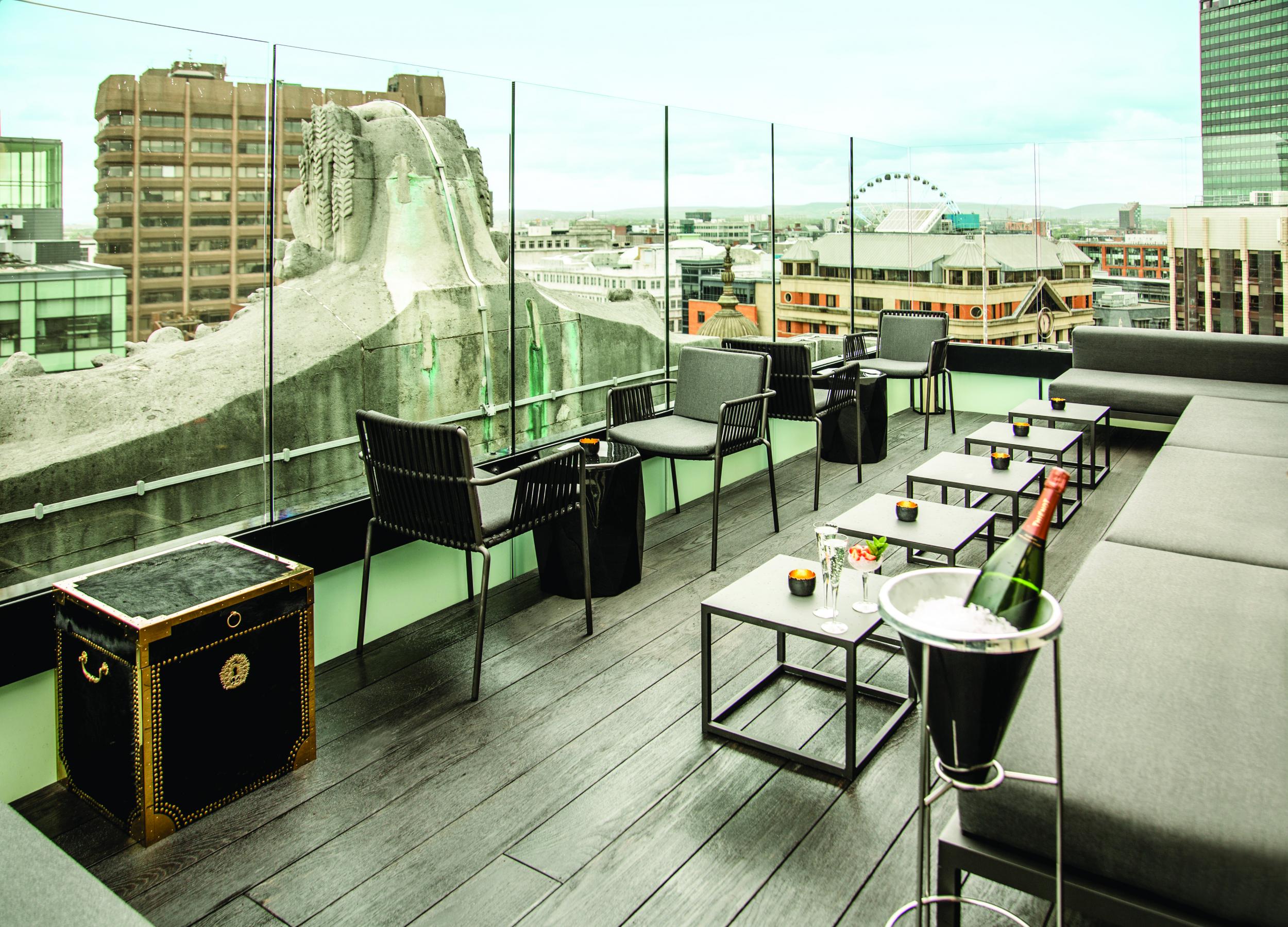 Everything about this five-star hotel on central King Street is unashamedly grand, from its striking white art deco building to the gold-tiled private members’ club on the seventh floor.

Stepping inside, you escape to a luxurious world with staff in character – think doormen in bowler hats and “bank” managers in pin-striped suits (the building was formerly a branch of Midland Bank). Rooms are equally decadent, with marble bathrooms, dark decor and toiletries on gold bars. 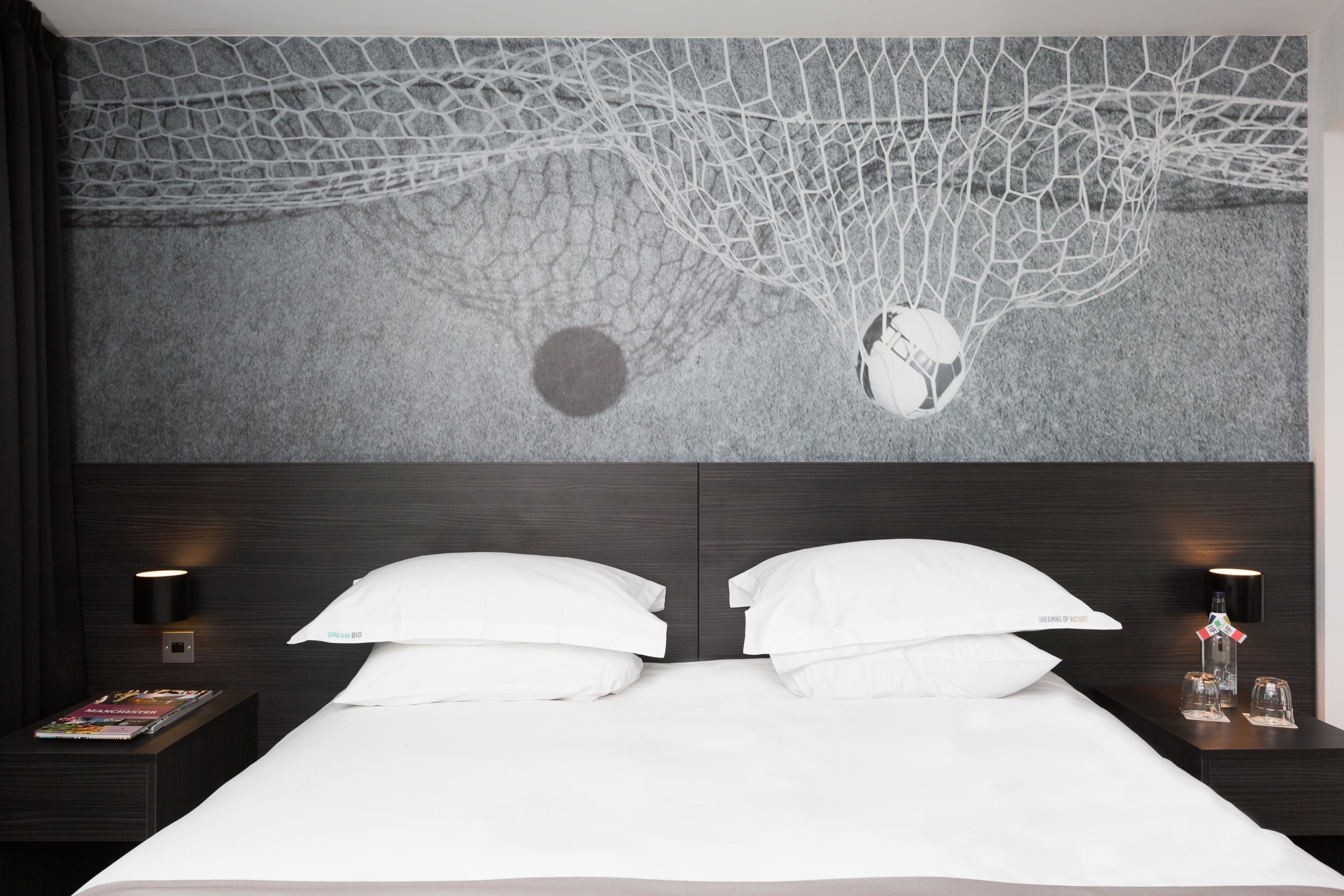 Manchester United fan or not, staying next to the world-famous Old Trafford football stadium, in a hotel owned by five former players, is a memorable way to visit the city. The modern rooms have lots of extras that non-sport fans will appreciate too, such as a complimentary mini bar packed with retro sweets and comfy Hypnos beds.

If you’re travelling with kids, there are special family-friendly “squad rooms” as well as a sweet shop in the restaurant.

Best for people-watching: The Lowry Hotel 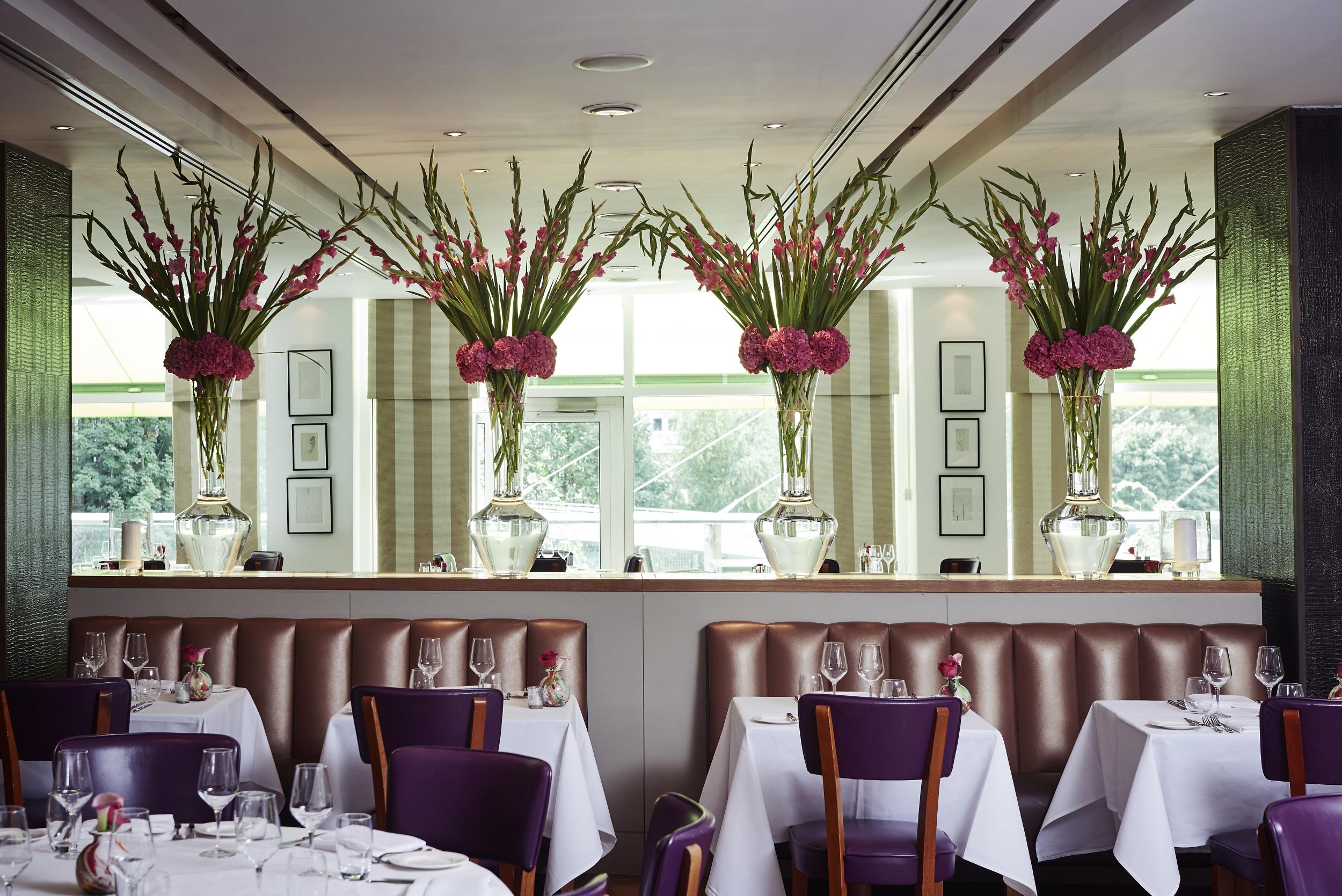 Big-name celebrities have stayed in this plush five-star hotel and it’s a regular haunt for football players. But every guest can enjoy five-star service, and even the entry-level deluxe rooms are spacious.

You can watch the world go by from your room’s floor-to-ceiling windows while loafing on a leather chaise longue, or people watch with a drink on the large sun terrace. To escape, you can admire the hotel’s diverse art collection or treat yourself to a spa treatment.

Doubles from £105 per night, room only

Best for indulgence: The Midland

With two excellent restaurants, which are destinations in their own rights, this iconic hotel is a treat for foodies. Book Adam Reid at The French for special-occasion fine food by the winner of the BBC’s Great British Menu, or Mr Cooper’s for a more laid-back and playful meal.

The grand building packs a punch, with an elaborate red brick facade, enormous pillared reception area, and corridors that were built large enough for two ladies in gowns to walk down side-by-side. The 312 rooms have a regal colour scheme and some look out over Central Library. The hotel is also home to a lovely spa. 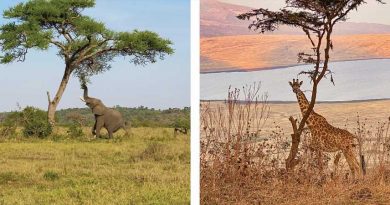