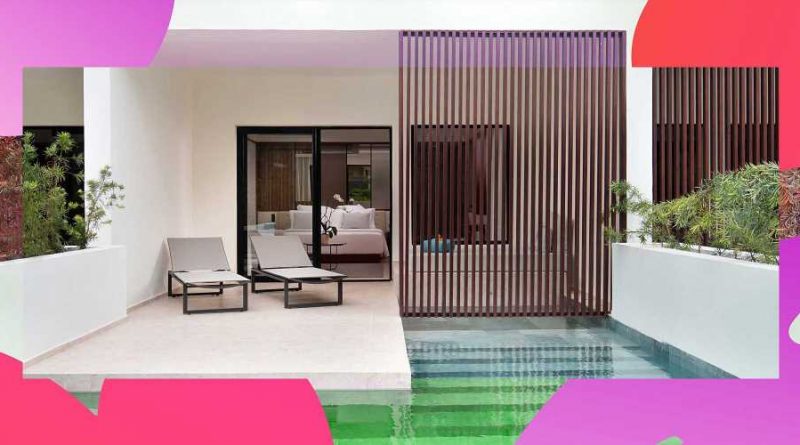 The pandemic hit the Caribbean with a hammer last year, forcing resort closures throughout the 30-something countries that comprise the tourism-dependent region. The good news: Despite the downturn, several new hotels are opening in 2021, welcoming weary travelers seeking a sun-drenched reprieve from lockdown life. And others, new in 2020, are finally having the chance to show visitors what they're made of. From the Bahamas to the U.S. Virgin Islands, and family-friendly resorts to private-island retreats, here are the new (and new-ish) Caribbean hotels to have on your radar. On the southern end of the white-sand sweep at Meads Bay, this collection of 15 one- and two-bedroom condo-style suites has been open since January 2020. It's an ideal base for families and extended-stay visitors who'll appreciate the units' fully equipped kitchens, washer/dryers, private hot tubs, and spacious square footage. There's no restaurant, but staff can arrange private chefs, and the hotel is walking distance from some of the island's best restaurants. You may recognize this Andros newcomer — featured on Travel + Leisure's It List this year — from TV, as it's the star of Renovation Island, the HGTV series that documents owners Bryan and Sarah Baeumler's revamp of the once-abandoned beachfront hotel. A clutch of simple but sophisticated rooms and villas, as well as some of the island's most elegant dining, make this the perfect launch pad from which to explore the Bahamas' largest island. Built on the same plot as the previous Carl Gustaf, this beautiful property, also featured on this year's It List, reopened in fall 2020 with 21 new hillside lofts and villas. All have balconies with views of the yacht-filled harbor in the capital, Gustavia, and several come with private plunge pools. Highlights include the first outpost of the Michelin-starred brasserie Le Fouquet's, and Shellona, the hotel's casual-chic restaurant on the sands of nearby Shell Beach. The quarter-acre islet in the middle of the North Sound — a boater's favorite since the 1960s — was decimated by Hurricane Irma in 2017. Under new ownership, the yachty hot spot will finally make its triumphant return this fall with a completely rebuilt restaurant, two bars, and nine sleek rooms and suites. Now, when the Painkillers kick in, you have somewhere to kick back. On the west side of Ambergris Caye, in the Caribbean Sea, Wyndham's third Belizean hotel opened in April, featuring eight beach houses and five villas with private pools. A restaurant, gym, and spa round out the offerings at the pet-friendly retreat, which is also a five-minute boat ride from San Pedro and close to the superb snorkeling and diving at Hol Chan Marine Reserve. Yes, we know, Bermuda isn't technically part of the Caribbean. But since its nearest island neighbors are Caribbean, we happily embrace it. Open this May, the archipelago's newest resort sits on St. Catherine's Beach in St. George's, the island's former capital (now a UNESCO World Heritage site). Diversions at the 122-room hotel include the oceanfront Five Forts Golf Club, a pair of pools, and the Iridium Spa. Swing by the bar to sample the Gates Bay Mary, the newest interpretation of St. Regis' signature cocktail, the Bloody Mary, made with local Goslings Black Seal rum. This adults-only all-inclusive resort debuted in January as the brand's first hotel outside Mexico. Guests in its 345 suites (some with private whirlpools, others with swim-up access) can enjoy seven restaurants, three bars, a full-service spa, a soccer field, and an infinity pool that overlooks the broad sands of Uvero Alto beach.

Eclipse at Half Moon, Jamaica Last spring, after more than 60 years in business, this Montego Bay stalwart welcomed a new addition that offers a modern interpretation of the classic. The resort within a resort has 57 light-filled rooms decorated in soothing hues that mirror the sea and sand beyond and furnished with pieces that acknowledge rather than mimic colonial-era styles. Eclipse has seven bars and restaurants plus an infinity pool, and guests can also enjoy access to Half Moon's impressive amenities, including an equestrian center, 18-hole golf course, and Fern Tree Spa. Sister to SLS Baha Mar in Nassau, this 45-room newcomer, which opened last February, promises all the bells and whistles of a large resort within the setting of the private Puerto Cancun development. Hotel restaurants include the poolside Altitude and an Argentinian grill, Leynia. But guests can also book the house Lincoln and head to several other eateries in the neighborhood, which is also home to a private marina, golf course, shops, and a cinema. Adding to the clutch of hotels in the cobblestoned Old San Juan is this former post office-turned-boutique, which debuted last December on the Plaza de Armas. The 43 rooms, decorated in contemporary style, are comfortable base camps for exploring the area's historic sites, shops, and restaurants. And the rooftop infinity pool offers a bird's-eye view of the city and San Juan Bay beyond. There's a new place where you can watch planes take off and land at Princess Juliana International Airport (SXM) — management at The Morgan suggests their rooftop observation deck, in Simpson Bay, a five-minute drive from SXM. After some plane spotting, guests can retreat to any of the 124 ocean- or runway-view rooms and suites, all of which have private terraces or balconies. The trio of 12-story towers make this Grace Bay newbie hard to miss — and also the tallest structure on Providenciales. But after it opens in June, the 320-room hotel will likely also be known for its other attributes, which include a casino, a branch of BLT Steak, three pools, and a spa. Right now, there's only one three-bedroom villa at this private-island resort, located a quick boat ride from St. John. But that just makes the experience all the more private. Overnight here and when the day-trippers depart the beach club's oceanfront infinity pool, you can enjoy all of Lovango's amenities — waterfront dining and hiking trails among them — in blissful solitude. (Luxury tree houses and glamping tents are scheduled to debut in December.)

Sarah Greaves-Gabbadon (a.k.a. JetSetSarah) is a writer, editor, on-screen host, and self-described "Carivangelist," who goes to the beach and beyond to share the culture, lifestyle, and personalities of the Caribbean with the world. Follow her adventures on Instagram and Facebook.

A Magical Tour Through Egypt