Deep in foodie country sits a boutique inn that gives its Michelin-starred neighbours a run for their money. Six cosy minimalist rooms sit atop the characterful 18th-century red-brick pub, careful not to upstage the inn’s star attraction: its food. Freshly foraged ingredients travel from garden to plate, with the seasons dictating the menu.
Doubles from £110, themashinn.com

A 17th-century coaching inn meets slick slate chic at the King’s Arms, in the heart of the Cotswolds. Sink into a leather armchair after a country walk under the beamed pitched roof of the former stables, now three elegant rustic cottages. The pub’s embedded location, roaring fireplace and fine menu offer the perfect respite for the weariest of travellers.
Doubles from £90, kingsarmsdidmarton.co.uk 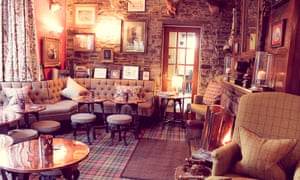 Dried garlands, tweed and taxidermy line the walls of this old-school inn, in the village of Ravenstonedale. A sprawling beer garden opens on to a babbling brook, complete with swings and firepits. The perfect base for the Eden Valley, expect rosette award-winning food and swish bedrooms.
Doubles from £95, blackswanhotel.com

The “forest to fork” menu and country-chic aesthetic is the draw in this award-winning gastro-pub at the foot of the South Downs. This coaching inn has been transformed into a luxe destination pub with a mirrored dining room, statement art and fur-lined booths. Expect Egyptian cotton sheets in the 15 highly styled rooms, sheepskin rugs and, in some, a four-poster and even a hot tub.
Doubles from £80, thewhitehorse.co.uk 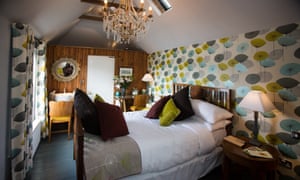 While the faithful follow the Pilgrims’ Way across the North Downs towards Canterbury, those looking for more terrestrial luxury can find it at the foot of the hillside in one of the four sumptuoussuites of this 16th-century free house. Wake up to cappuccinos and newspapers before wandering downstairs to breakfast in the classic timbered bar.
Doubles from £120, fivebellsinnbrabourne.com

The Rose and Crown: Snettisham, Norfolk

Picture-perfect from the moment you step through the rose-clad door, the bustling Rose and Crown honours the classic inn aesthetic whilst adding a fresh lick of colourful modernity. Reward a walk on Heach beach with a sharing platter, then relax in one of the imposing yet cosy rooms.
Doubles from £120, roseandcrownsnettisham.co.uk 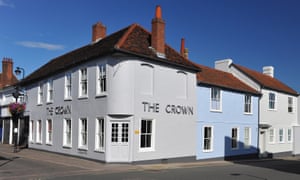 Muddy wellies can be left in the car boot while exploring the colourful riverside market town of Woodbridge. Return to a pampered stay in one of the 10 boutique, New England-styled rooms above the modern dining rooms and glass-roofed bar. The menu includes Deben oysters.
Double rooms from £95, thecrownatwoodbridge.co.uk

The Old Inn: Crawfordsburn, County Down

This 17th-century thatched coaching inn-turned-boutique hotel is in the hamlet of Crawfordsburn. Sandy Helen’s Bay is nearby for coastal romps and Crawfordsburn Country Park is on the doorstep. The award-winning food is modern European and the setting is traditional: leather sofas, 10 original wood-burning fires, crimson walls, suits of armour and stained-glass windows. Rooms include four posters, plush soft furnishings and a sense of stepping back in time – with modern creature comforts.
Doubles from £90, theoldinn.com

The Queens Arms: near Sherborne, Somerset 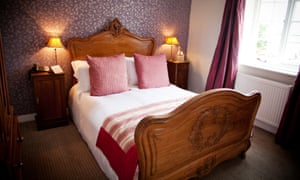 In the village of Corton Denham, this honey-coloured Georgian inn has flagstone floors, open fires and a pretty garden. A map shows where produce is sourced: their own smallholding and kitchen garden, with meats, cheese and bread from nearby farms. The eight bedrooms have wonderful views of the Dorset/Somerset hills.
Doubles from £95, thequeensarms.com

“Eat, drink, sleep” is the philosophy of the inviting red-walled inn near the Welsh border, between the Brecon Beacons and the Black Mountains. Waterfalls, heights and breathtaking views are matched by a locally sourced, inspired menu, and understated but plush bedrooms with Welsh woollen blankets and four posters.
Doubles from £130, felinfachgriffin.co.uk 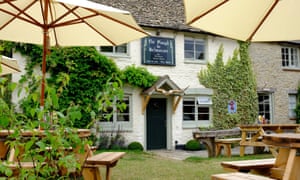 A great pub doesn’t need to be full of surprises, and this charming, quintessential country inn ticks all the boxes. Behind a drystone wall, its own walls clothed in vines, the Plough Inn offers upscale British comfort food and a good range of ales. The seven upstairs rooms, panelled in dove grey, are small, old-school stylish and perfectly formed.
Doubles from £110, theploughinnkelmscott.com

On an island between the River Avon and the Kennet and Avon canal, this 18th-century gastro-pub works a contemporary but comfy look: think antlers, wooden floors and wingback chairs. Dishes are local and real ales are served from the bar, the surface of which is decorated with shiny pennies to mark decimalisation in 1971. The contemporary riverside rooms have private terraces.
Doubles from £90, dundasarms.co.uk 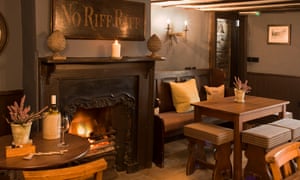 Twelfth-century monks found refuge in this abbot’s lodge, now a 21-room pub-cum-hotel. The grand stone archways and flagstone floors still remain, the bar is buried in the vaulted crypt, and the hearty food – including local fudge – is highly acclaimed. The bedrooms’ classic styling, some in converted miners’ cottages, complement this historic gem.
Cottages from £150, lordcrewearmsblanchland.co.uk

The Timble Inn, in the thimble-sized village of Timble, is more gastro than trad, more wine than ale. But what it does it does very well, boasting two AA rosettes for its ambitious Sunday roasts. Cloaked in glorious quiet, its nine rooms are smartly styled for the perfect getaway in the stunning Washburn Valley.
Doubles from £150, thetimbleinn.co.uk

The Bell at Skenfrith: Monmouthshire 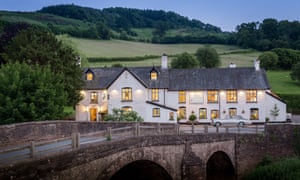 On a picturesque bridge on the banks of the River Monnow, the boutique Bell has retained its old-world charm. Inglenook fireplace, flagstones and rocking chairs sit comfortably with hearty, award-winning food with a modern twist. The Dog and Boot Bar serves a range of ales and ciders. The country-house bedrooms have views over the river or the Welsh Marches to the rear.
Doubles from £150, skenfrith.co.uk 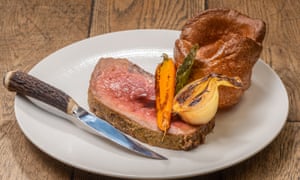 The Star Inn, HaromeBreakfast is served under mossy beams on a round table that would put King Arthur to shame. A Michelin star was awarded to the “modern Yorkshire” menu, and there are nine rooms.
Doubles from £150, thestaratharome.co.uk

The Peat Inn, St Andrews Recipient of Scotland’s first Michelin star, the Peat Inn offers fine dining in a smart-rustic setting before a Scotch-fuelled stagger back to one of the eight immaculate suites.
Doubles from £225, thepeatinn.co.uk 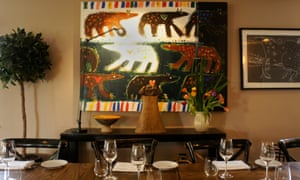 The Walnut Tree Inn, Abergavenny This elegant inn boasts food as good as its views. Its menu focuses on ingredients and technique rather than a specific cuisine. Stay in one of two garden cottages.
Doubles from £100, thewalnuttreeinn.com

The Dog at Wingham, near CanterburyThe Dog may be old, dating back to the 15th century, but it has certainly learned new tricks. Stylish interiors and a modern menu draw foodies from far and wide.
Doubles from £90, thedog.co.uk

• This article was amended on 10 September. An earlier version referred to the Crown Inn, Woodbridge, Essex. Woodbridge is in Suffolk.

Saja steps up to lead Bawah Reserve in the Maldives