With U.S. RevPAR (revenue per available room) growth grinding to a near halt this year,
it appears that the hotel industry’s record 116-month upcycle might be
coming to an end.

Hotel data firm STR, in partnership with Tourism Economics,
released its final forecast for the year in mid-November, downgrading its
RevPAR projections to 0.8% growth for 2019 and 0.5% growth for 2020.
Previously, STR had forecast that U.S. hotel RevPAR would increase 1.6% and
1.1% for 2019 and 2020, respectively.

STR president Amanda Hite said, “U.S. hotels have posted
nine straight years with RevPAR increases of basically 3% or higher, so growth
levels below 1% will clearly represent the industry’s worst years since the
recession.”

Other 2019 metrics paint a similarly dour picture. STR
estimates that U.S. hotel occupancy will be down 0.2% this year, though average
daily rate (ADR) will grow 1%.

Supply is expected to slightly outpace demand, with the
former up 2% and the latter expanding by 1.8%.

Like STR, CBRE has delivered a relatively tepid outlook for
the coming year, with CBRE Hotels Americas Research senior managing director
and head of lodging research Mark Woodworth predicting that “2020 will be
another year of OK but not great” performance.

“For the first time in a decade, supply growth should
outpace the increase in demand, and the national occupancy level will
experience a slight decline,” Woodworth said. “Also, 2019 will be the first of
a three-year run of sub-1% annual RevPAR change. This underscores the expected
reality that increases on the bottom line are likely to be the exception and
not the rule.”

Woodworth added that broader economic uncertainty, which he
said has led to “a fragile approach to revenue management,” is likely to
persist well into the third quarter of next year.

“The question is, if occupancy has been at its highest since
1981, how can we have a situation where ADR is only increasing at half the rate
of inflation?” Hanson said. “And part of that may be because it’s hard to find
a hotel nowadays that doesn’t have a revenue manager.

“But is revenue management, as an industrywide practice, helping or hurting? Some analysts
will blame the internet, which makes it very easy for consumers to compare
prices and find low rates, but it’s the industry that’s setting those rates.”

Equally concerning is the fact that labor costs, real estate
taxes and insurance and other overhead expenses are growing at a rapid rate.

Jan Freitag, STR’s senior vice president of lodging
insights, said, “We’re now in this weird environment where our costs are going
to continue to go up, but room rates are falling behind.”

Freitag added that the cost/ADR situation will end up one of
two ways: “Either hotels will try to drive other revenue outside the room rate,
like [food and beverage] or spa, etc., or their profitability will likely be
hit.” 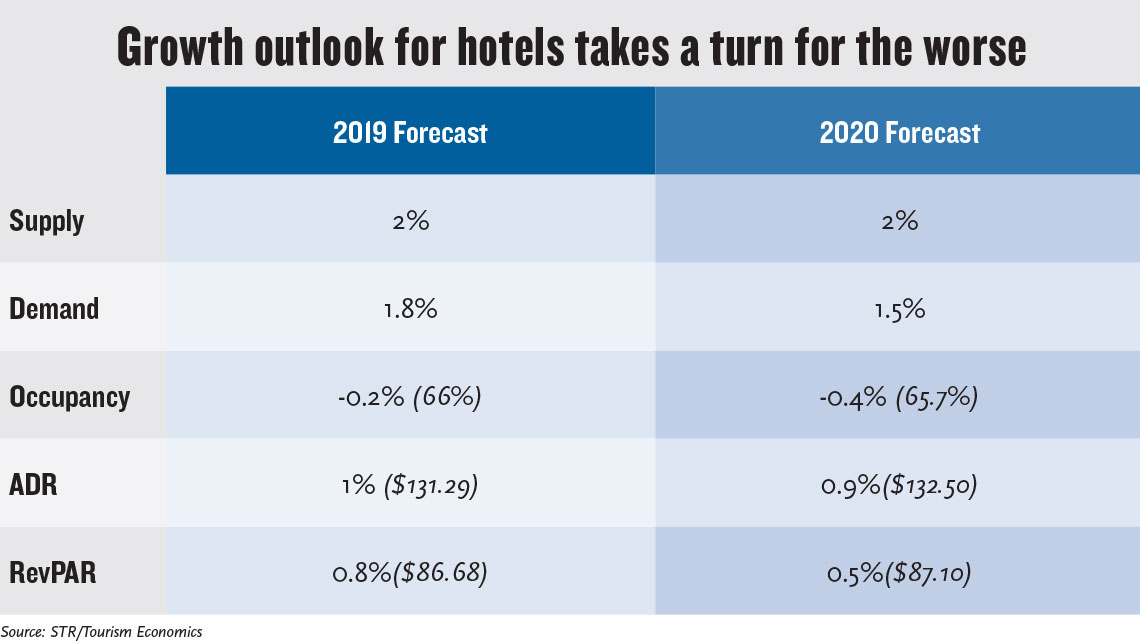 Kevin Kopelman, a managing director and research analyst
covering hotels and online travel at Cowen, said he believes that the booming
short-term vacation-rental market could also shoulder some blame for the
lodging industry’s recent woes. Cowen estimated that for 2019, Airbnb’s U.S.
business will expand by $1.25 billion year over year.

“In addition to the weaker macro trends, we’re also calling
out the fact that investors are significantly underestimating the impact Airbnb
is having,” Kopelman said. “We don’t think the impact of Airbnb is necessarily
accelerating, but it’s growing, and it’s highly cannibalistic to hotel industry
RevPAR.”

Moreover, short-term vacation rentals could be having
notable impacts in some of the largest U.S. metro markets. According to STR,
RevPAR in the country’s top 25 markets in aggregate is expected to have dipped
0.5% in 2019, with Seattle (minus-4.1%) and New York (minus-3.5%) seeing the steepest
declines.

“Airbnb does have an outsized presence in those top urban
markets,” Kopelman said. “And some of those markets are also going to see less
international inbound travel due to a strong U.S. dollar as well as feel the
effects of slower business travel.”

Major metro areas like Seattle and New York could also be on
the verge of oversupply. According to J.P. Ford, senior vice president and
director of business development for Lodging Econometrics, recent spikes in
hotel openings could be putting some pressure on RevPAR in select markets.

“If you take Seattle, for instance, you had 14 new hotels
with 3,325 rooms open last year, which represents a room growth rate of 7.3%,”
Ford said. “That’s a pretty healthy dose of new supply. So I’m not surprised to
hear about a squeeze on RevPAR happening there.”

In fact, he said, “Just based on the strength of the U.S.
pipeline alone, you can probably expect that other top markets may have some
similar oversupply concerns.”

Meanwhile, with myriad other headwinds at play, whether or
not it’s time to stop calling the industry’s current run an “upcycle” appears
to be up for debate.

“But on the other hand, it may be time to face reality and
accept that monthly RevPAR growth is going to be slightly positive or slightly
negative, and going forward, it’s going to be really hard to continue to call
this an upcycle.”

This New App Will Connect You With a Local Expert to Take You Camping, Hiking, Surfing, and More

US Accuses China of Playing Politics With Airlines

Flights: Plane passengers ‘disgusted’ when man gets this out mid flight

Flights: Will I need to wear a mask to fly?

The Best Elvis in Vegas Is Having the Worst Time Right Now
We and our partners use cookies on this site to improve our service, perform analytics, personalize advertising, measure advertising performance, and remember website preferences.Ok