Just in case you want to add another element of terror and unease into your life, check out the new ride in southwestern China’s Chongqing dubbed the ‘Flying Kiss’.

There is not an awful lot of info about it written in English yet, but according to this website it is essentially two giant statues (one male and one female), overlooking a 3000ft (914m) cliff.

“The giant statues, holding you up on rotating observation decks with one arm, bring you up into the sky for a spectacular view that is unforgettable”.

It really requires video to do it justice:

The description continues: “There are no seats, seat belts, or safety harnesses for the entire ride. For safety, there is simply a waste-high gate. You are free to move about the observation deck throughout the duration of the ride as the carousel turns and rises – giving you spectacular views of the surrounding mountains and valleys below.” 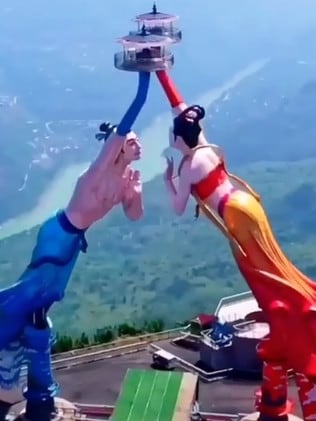 “The two statues represent two lovers from a Chinese mythical love story and the big finale is when the pair reach their highest elevation, at which point the two statues ‘kiss’.”

Someone saw the photos on Reddit and asked “how do you get up there?” Another person helpfully responded “You are born there, and grow up. Only way”. (The real answer is far less entertaining – the statues bend down to the ground to pick up passengers and drop them back again, presumably screaming – at a rooftop platform). 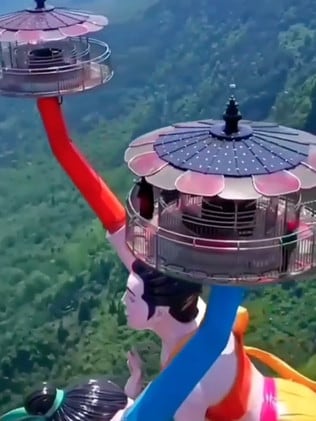 You are free to move about the observation deck throughout the duration of the ride. Picture: SuppliedSource:Supplied For safety, there is simply a waste-high gate. Picture: YoukuSource:Supplied

As soon as footage of the ride hit the web, viewers started curling their toes.

“That is truly terrifying … I actually had to look away,” wrote one Reddit user. “I would not go on that if you paid me a million dollars.”

“I think I’ll pass on this one, satan,” wrote another.

On Twitter news anchor Morgan Fogarty wrote, “Even watching the video of this ride makes my stomach turn. No thank you.”

Best critique goes to the person who wrote “rather than blowing flying kisses, this looks more like two giant waiters holding dishes”. 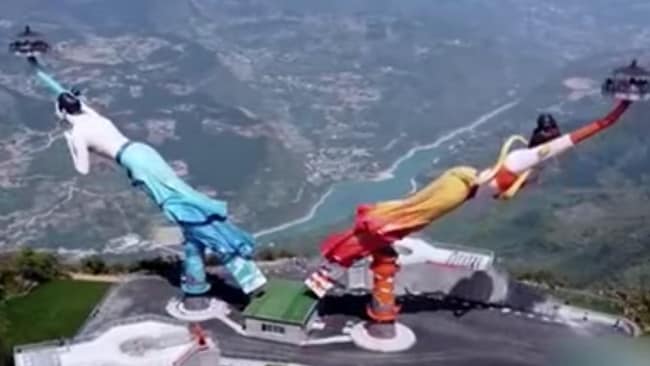 There are no seats, seat belts or safety harnesses for the entire ride. Picture: YoukuSource:Supplied

But not everyone was so scathing. Some admired it as a feat of engineering and design: “Some say it’s tacky, but I think it’s magnificent … I really admire the designer,” wrote one fan.

There are so many things we want to do when we are allowed to travel internationally again. Standing up on a rotating platform that comes dangerously close to another rotating platform on top of a cliff is, frankly, not one of them.

The most beautiful natural wonders in America

Bulgari Continues Its Epic Roman Patronage With the Priceless “Torlonia Marbles”
We and our partners use cookies on this site to improve our service, perform analytics, personalize advertising, measure advertising performance, and remember website preferences.Ok