Home » Where to stay » How to spend a weekend in Jakarta

A direct flight between London and Jakarta on Garuda Indonesia has made south-east Asia’s most culturally-diverse capital accessible from the UK as never before. Some 10 million people live here, but almost all have roots elsewhere, resulting in an exuberant blend of Javanese, Balinese, Chinese, European and numerous other cultures. Jakarta is the capital of the world’s most populous Muslim-majority nation, but Hinduism, Christianity, and Confucianism also thrive. Tolerance rules, exemplified by lively restaurants serving spicy meals washed down with cold beer, and an on-the-pulse clubbing scene that pounds until the wee hours.

Gridlocked traffic is a frustration, but seeking out pockets of history and culture amid the maelstrom is part of Jakarta’s allure. Sunda Kelapa docks and the old town of Batavia are reminders of Dutch colonial times, while the hip hotels and glass skyscrapers of Menteng spin you back to the 21st century.

The high-speed lift which whizzes up 56-storey Jakarta Skye Tower (1) (ismaya.com/skye) in 10 dizzying seconds feels like a fairground ride. On a clear day (or night) the views are dazzling. There is an open-air terrace and restaurant, but you can go for coffee or a cocktail depending on the time of day.

During three centuries of colonial rule, Batavia on the southern fringe of Jakarta Bay, also now known variously as Kota or ‘Old Jakarta’, was the commercial hub of Dutch Indonesia. Get a taste of this era with its trappings of imperial power by starting in the Taman Fatahillah square (2) flanked by stately structures such as the Jakarta History Musuem (3) in the old Stag Huis (town hall), built by the Dutch in 1710.

Follow the Kasar Besar Canal (4) bordered by crumbling European-style mansions, up to the photogenic 16th-century wooden Kota Intan drawbridge (5). Continue down the canal to the Bahari Maritime Museum (6) in an old Dutch East India Company warehouse.

Then climb the Syahbandar Watchtower for commanding views over the port.

Lunch on the run

The northern edge of Kota district spills into a warren of cobbled alleys where burning incense wafts from Taoist temples and markets buzz with busy food stalls. This is “Glodok”, traditionally the enclave of the Chinese community and the place to graze a bewildering array of street treats. You’ll find crispy roast duck wings on wooden skewers and steamed dumplings stuffed with ground beef or water chestnuts, all wrapped in banana leaf. More exotically, Jalan Pancoran street (7) specialises in Rujak Shanghai Encim, a concoction of cuttlefish, spinach and peanuts drenched in tangy red sambal sauce. Or if your craving is for pig’s intestines stewed in a sweetish pulp, sekpa is the stuff to sniff out. 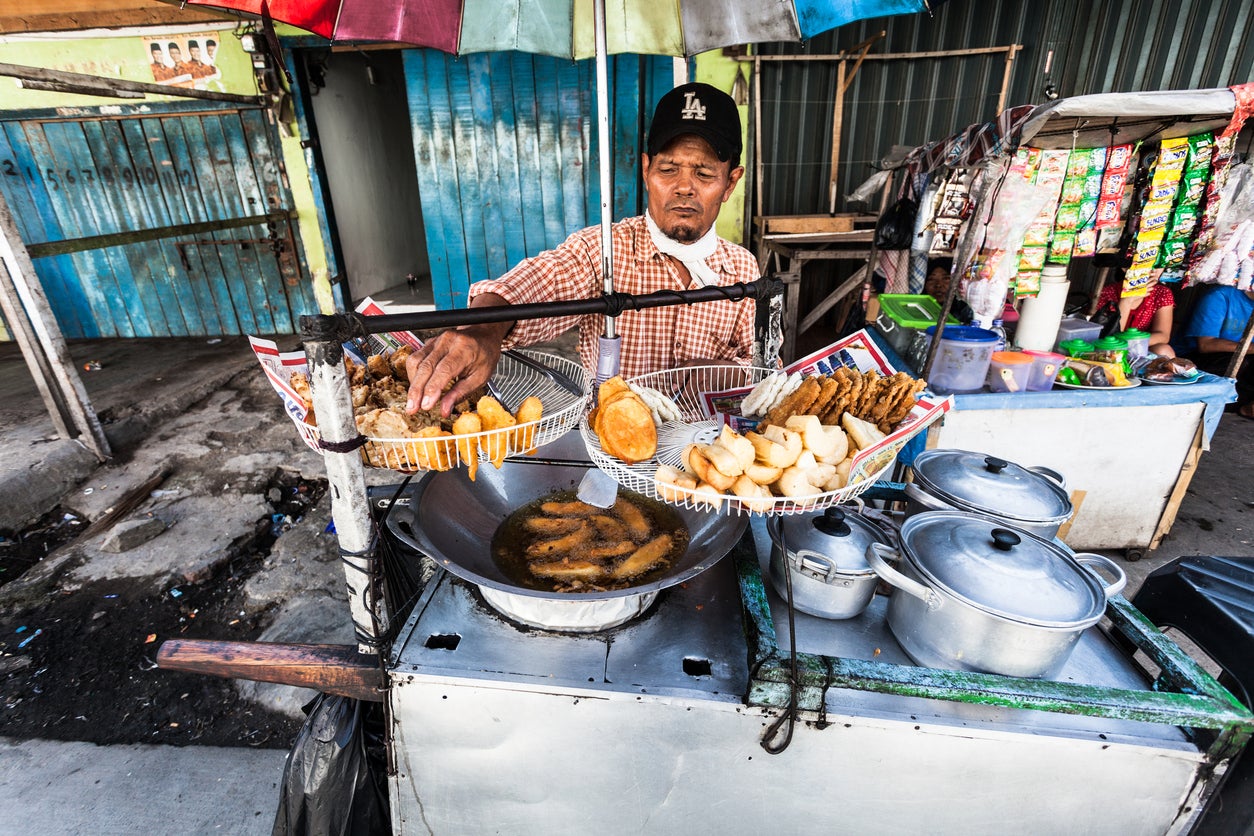 Sip a cold Bintang beer at the Batavia Marina Bar (9) (bataviamarina.com) on the seafront next to old Sunda Kelapa port where rows of resplendent pinisi-masted schooners are moored. Watch stevedores load cargo bound for the so-called “Thousand Islands” of Jakarta Bay, in dock scenes reminiscent of past centuries. 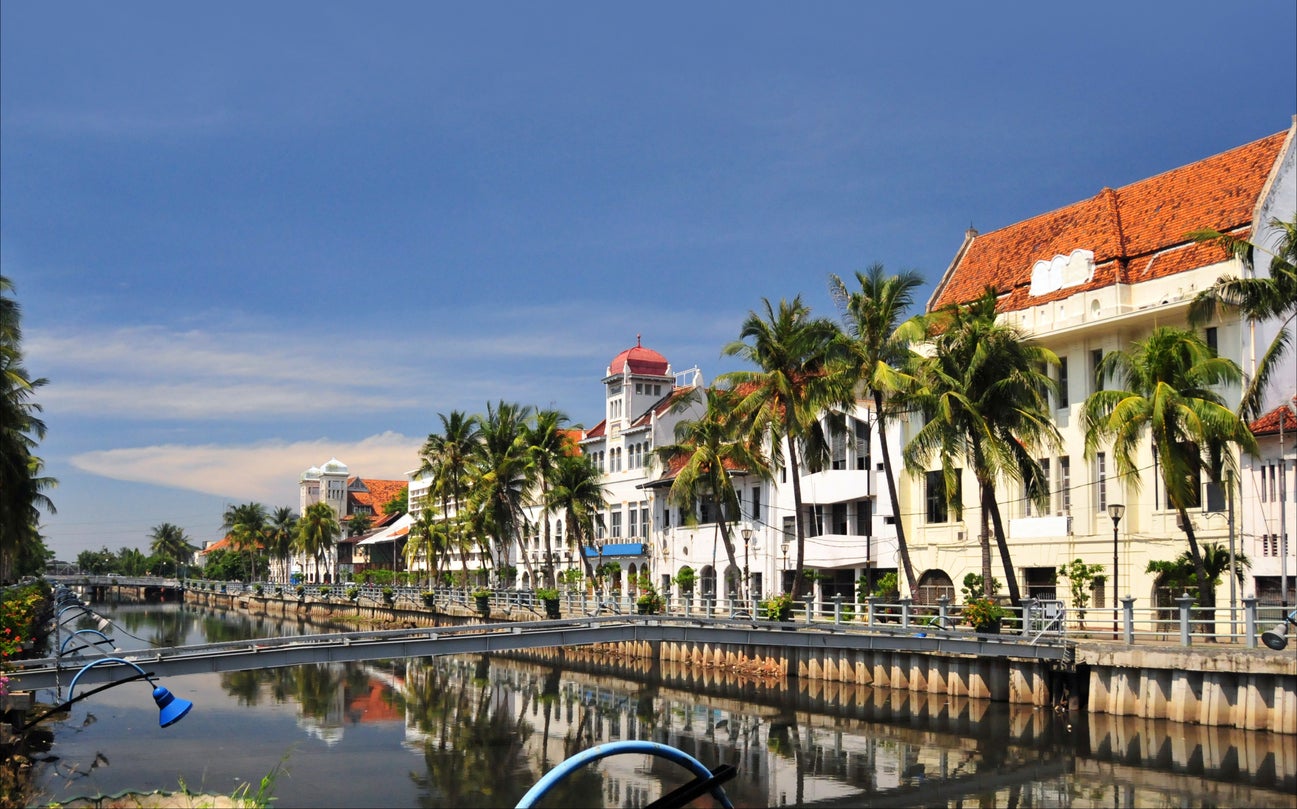 Dine with the locals

Mix with pop stars, actors, politicians and other glitterati at the whimsical Dapur Babah (10) restaurant (tuguhotels.com) just off Merdeka Square. Owner Anhar Setjadibrata and his daughter Lucienne might be there to welcome you to the pair of old merchant houses they have restored and stuffed with mementoes from the city’s history. Especially striking is the collection of Hindu, Buddhist and Chinese statues. The term “Babah” refers to the time when Dutch-influenced Javanese women married Chinese settlers. This fusion of cultures resulted in a style of cuisine exemplified by dishes such as tahoe goreng petis – fried tofu with sweet shrimp paste.

Savour a rich brew of Java coffee with pastries or traditional Indonesian nasi goreng (fried rice) at Waris 13B café (11) on Taman Amir Hamzah in the fashionable Menteng district. The street is lined with terracotta-tiled houses including one where a young Barack Obama lived with his mother and stepfather after they moved to Jakarta in 1967. Round the corner is his old school, Sekolah Dasar Negeri Menteng (12); outside, a cute statue of “Barry” (as he was known) stands atop a plinth where an inscription quotes the President’s proclamation: “The future belongs to those who believe in the power of their dreams.”

A walk in the park

Part paved, part grassy expanse, Merdeka Square (13) is the city centre. It covers more than a square kilometre and is claimed as the world’s largest city square. At its heart is the soaring National Monument (14), a 132m obelisk topped with a golden-leaf “flame”, raised to celebrate Indonesia’s independence from The Netherlands in 1949. Chances are there will be some sort of activity going on as you stroll through. A military parade, perhaps, or a demonstration. If not, you might find nets strung up on the grass for games of volleyball or badminton. 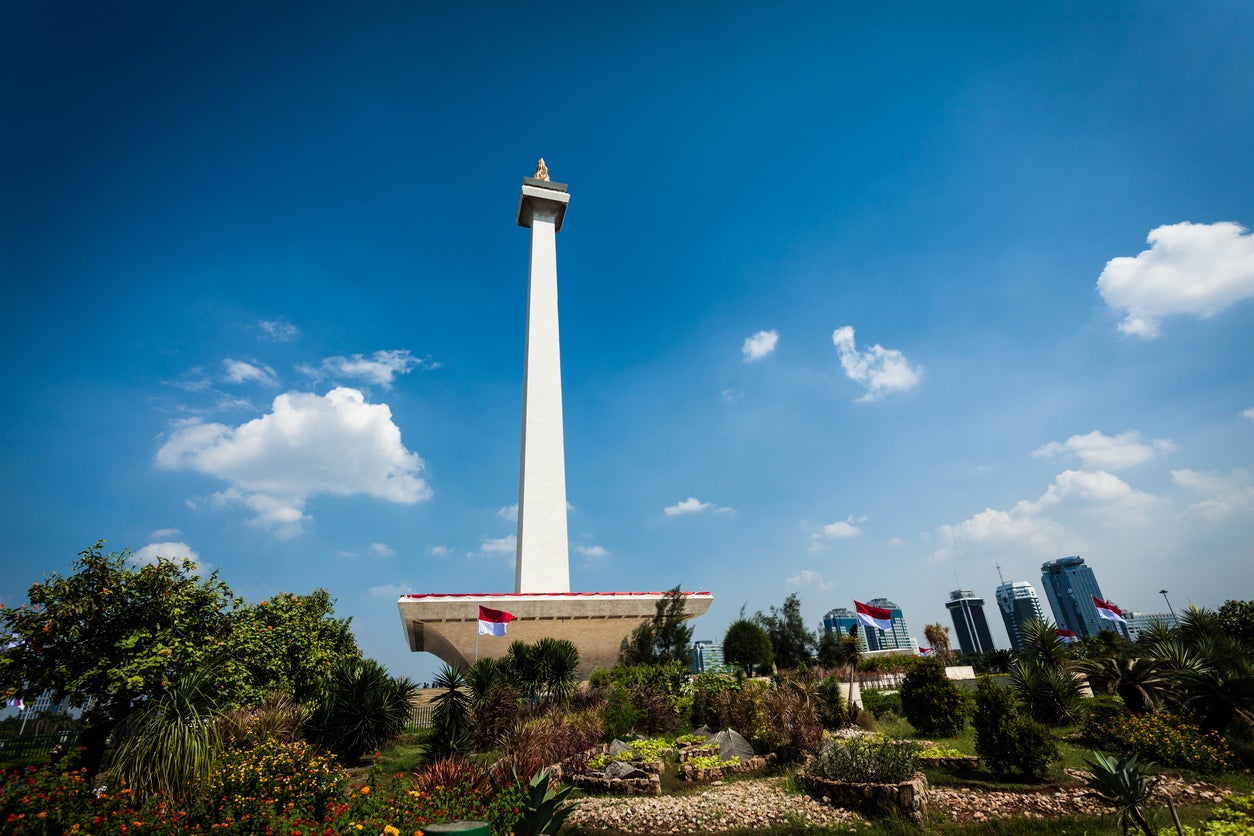 Hop on a commuter train to Gambir Station (15), the city’s main railway hub on the east side of Merdeka Square, to reach Jakarta’s two wonders of sacred architecture. Istiqlal Mosque (16) is made of gleaming Javanese marble and is the largest place of worship in south-east Asia with a capacity of 120,000. The triple-spired neo-Gothic Jakarta Catholic Cathedral (17) faces the mosque across a canal, a couple of minutes’ walk away. The proximity of the pair is a source of pride to many Indonesians, presented as symbols of peaceful religious and cultural co-existence.

The National Museum (18) on the west side of Merdeka Square soars to cultural heights on a par with the National Monument’s physical stature. Beyond having an unparalleled  collection of treasures devoted to the history, ethnology and geology of the Indonesian archipelago, this is a museum which celebrates the country’s cultural diversity. Over four floors discover the origins, as well as the present manifestations, of civilisation on islands as diverse as Java, Sumatra, Bali, Flores, Sulawesi, Borneo and Papua. 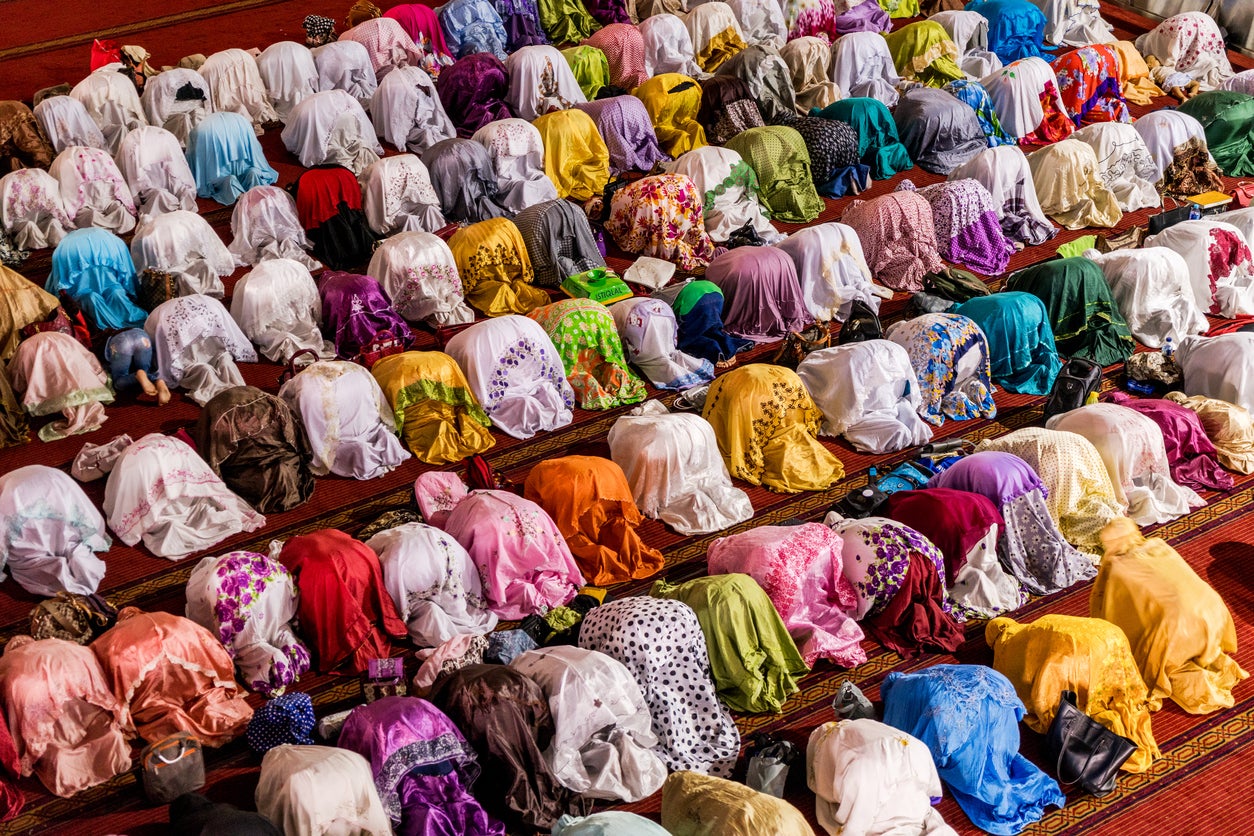 The Dharmawangsa (20) (the-dharmawangsa.com) is a haven of calm and classical Javanese style and luxury in the Kebayoram Baru area of south Jakarta. It offers huge rooms, pools, gardens, Javan sculptures, spa and tennis courts. Doubles from £210, B&B.

Hotel Aryaduta (21) (aryaduta.com/jakarta/default-en.html) is large, modern and good-value, plus centrally-located within an easy walk of Merdeka Square and key sites such as the National Museum, Istiqlal mosque and Cathedral. There’s a lovely swimming pool. Doubles from £52, room only.

Max One Hotel (22) (maxonehotels.com) is a bright, airy, hip hotel in the Jalan Jaksa area, the main hub of the international backpacker scene. Rooms are small and frills are few, but it has a smart feel. Doubles from £28, room only.

How on earth do you get into this 360-degree rooftop infinity pool?