When Hurricane Maria barreled through the Caribbean in September 2017, it destroyed 90 percent of the island of Dominica overnight. When the storm cleared, Dominica didn’t just want to rebuild. From the rubble, the island developed a new goal: to become the world’s first climate-resilient nation.

And, according to a new National Geographic report, the island is on track to do exactly that.

As part of its plan, Dominica doesn’t just want to build hurricane-resistant buildings. It wants to create a new economy that is also resistant to the effects of major storms. Instead of relying on seasonal local agriculture, Dominica is building a new tourism sector in hopes to attract high spenders.

Much of the tourism pull focuses on Dominica’s unspoiled nature as the destination is sometimes called itself “Nature Island” for its unspoiled natural parks and resources.

All new buildings must be able to withstand the impact of a Category 5 hurricane. For example, all new roofs must be built steeper and reinforced with screws instead of nails to better withstand strong winds. “People are taking things more seriously. They’re building much stronger,” a local cook from the Tamarind Tree Hotel told National Geographic. “I think it’s a good comeback. We did a good job.”

The Climate Resilience Execution Agency of Dominica (CREAD) has attempted to climate-proof as many aspects of life as possible: healthcare, transportation, energy and agriculture. Efforts include the banning of plastic on the island (because of infrastructure problems with collecting trash and bringing it to a landfill).

If all goes according to plan, Dominica will be able to bounce back from the next inevitable hurricane in a matter of weeks rather than years.

However, there is one place disputing Dominica’s claim. Some St. Barts residents say they were the first to have a climate-proof island, according to Bloomberg. The island in the French Indies is now looking for ways to protect its streets from flooding. Puerto Rico, Jamaica, the British Virgin Islands and many other tropical isles are also considering new ways to rebuild after buildings were destructed by hurricanes over the past few years.

Regardless of who can claim the title, in an age when climate is shifting and weather is becoming regularly more violent, many islands are working towards the common goal of rebuilding their infrastructure to better withstand what comes their way. 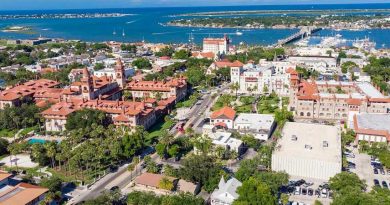 Why the Oldest City in the U.S. Should Be Your Next Destination for a Girls Getaway