Two sisters who decided to go for a kayaking adventure on the Arkansas River have made a historic find while out on the water.

Ashley and Erin Watt were rowing down the river in south-central Kansas when they reportedly saw a skull protruding from a sandbar.

The girls posted about the skull on Facebook. Picture: Kansas Dept of Wildlife, Parks and TourismSource:Facebook

According to the Kansas Department of Wildlife, Parks and Tourism, when they pulled it out, they saw the skull had massive teeth, some the diameter of a human thumb.

The pair had discovered a huge bear skull that experts believe is hundreds if not thousands of years old.

The bear skull was found in a sandbar on the Arkansas River. Picture: Kansas Dept of Wildlife, Parks and TourismSource:Facebook

“The bear skull was washed out of the same river sediments that routinely produce the skulls and bones of the American bison, some of which could date back as far as the last Ice Age,” Mike Everhart, one of the Sternberg palaeontologists who examined the skull, told CNN.

“Whether it is hundreds or thousands of years old, the skull gives us a better insight into the richness of life on the plains before Western man,” Mr Everhart said.

The bear skull is about 40cm long. Picture: Kansas Dept of Wildlife, Parks and TourismSource:Facebook

A bear skull believed to be at least hundreds of years old was discovered by two sisters in Kansas. Picture: Kansas Dept of Wildlife, Parks and TourismSource:Facebook

It is understood the skull is about 40cm long and 21.5cm wide. The bones had a fossilised appearance, meaning it was difficult for the researchers to determine if it came from a modern grizzly or a more primitive species.

Nonetheless, if the skull is verified to be from a grizzly bear, it would be the first physical evidence of the animal in the state. 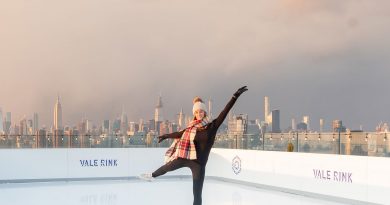 This Brooklyn Hotel Has a Rooftop Ice Skating Rink, Fondue Chalets, and the Best Views of the New York Skyline