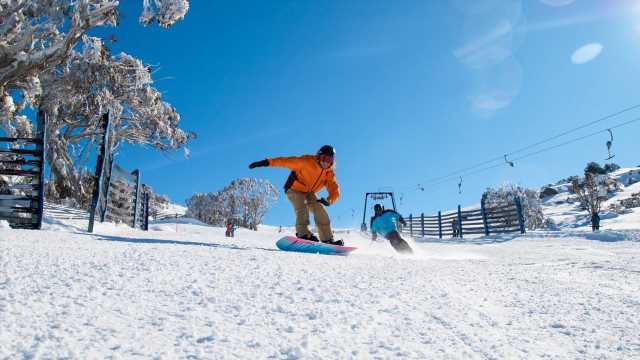 Season passes are back, kid’s programs will return, and brand new experiences will be unveiled when Thredbo kicks off one of its most anticipated ski seasons ever this year.

The NSW alpine resort is bracing for a roaring trade this winter, following a muted 2020 that saw visitor numbers limited and some attractions shuttered due to the pandemic.

Now, with restrictions continuing to ease in NSW and borders reopened nationwide, Thredbo plans to bounce back with even more action on the slopes and in the village when the ski season officially kicks off on June 12, subject to snow conditions.

“It’s definitely shaping up to be a good season and hopefully with the easing of some of the COVID restrictions we’ll be able to get back to some fairly normal operations.”

Thredbo is bringing back season passes and more activities and events during winter 2021. Picture: ThredboSource:Supplied

“I think a lot of people who hadn’t skied at Thredbo for a couple of years and have come back have been surprised at how good the skiing is here,” he said.

“The experience of skiing in Thredbo when the day is good, is as good as you’ll get anywhere in the world. I think a lot of our guests were reminded of that last year, and hopefully we’ll be able to get more of them experiencing it this year.”

Thredbo has confirmed today its season passes will go on sale on March 31 while day passes, lessons and rental will available through a staggered release, based on intended travel dates, in April.

“That will be a staggered approach because we believe the demand will be fairly large and we want to make sure we can service all those guests,” Mr Diver said.

“It’s an exciting time for us, especially with season passes coming back — we didn’t have season passes last year, and it’s an part of our product mix to get back for our loyal skiers who come down to ski more than a few times each season.”

While avid skiers and snowboarders still came flocking when last year’s ski season was given the green light, COVID-19 restrictions forced Thredbo to axe favourites like the children’s snow sports program, live music and events in the village.

This year they’re all coming back, along with a full calendar of events and some exciting new additions.

The Merritts Gondola is a recent addition to the alpine resort. Picture: ThredboSource:Supplied

One of those newer features is the Merritts Gondola, Australia’s only alpine gondola, which was installed at Thredbo last year.

It’s the centrepiece of a new experience at Thredbo this winter — Saturday night rides up to Merritts restaurant for a Bavarian-inspired feast.

“That will be an awesome on-mountain experience, and on top of that we’ve got a new snowcat with a people mover that fits 18 people, so we’re going to do some tours of the mountain on the Flare Run nights,” Mr Diver said.

The resort will also a host four-course dinner and wine experience at the Kareela Hutte restaurant, with guests also taken to the restaurant by snowcat.

Kareela Snowcat Dinners at the resort’s Kareela Hutt restaurant will be a new experience in 2021. Picture: ThredboSource:Supplied

“In the mornings, we’ll have Sunrise Sessions, which is the same thing in reverse – we’ll take people out to the highest lifted point at 5am to watch the sunrise and come down and have breakfast and get the first ski on the mountain before anyone else gets up,” Mr Diver said.

And what are the signs for weather this season? No one wants to make a call this early, but it seems we could be in for a winter wonderland.

“The weather professionals and local pundits are generally pointing at it being a cold season with above average precipitation, so I think if that goes well, we’ll get a good snow cover,” Mr Diver said.

“We do have a huge snow making system which we use to top up the snow, but it would be great to have a normal season – especially with the volumes of people who we believe will be coming down.”

Thredbo is bracing for one of its most anticipated seasons yet. Picture: ThredboSource:Supplied

• Extra flights: QantasLink has announced extra flights to Australia’s snowfields — including Cooma, which services Thredbo — this season. Flights from Sydney to Cooma are timed to allow travellers to depart after work on a Thursday or Friday and return Sunday evening, while flights from Brisbane to Cooma will be Queensland’s only direct airline connection to the snowfields this season.

Coronavirus expected to be six times more damaging than 9 11