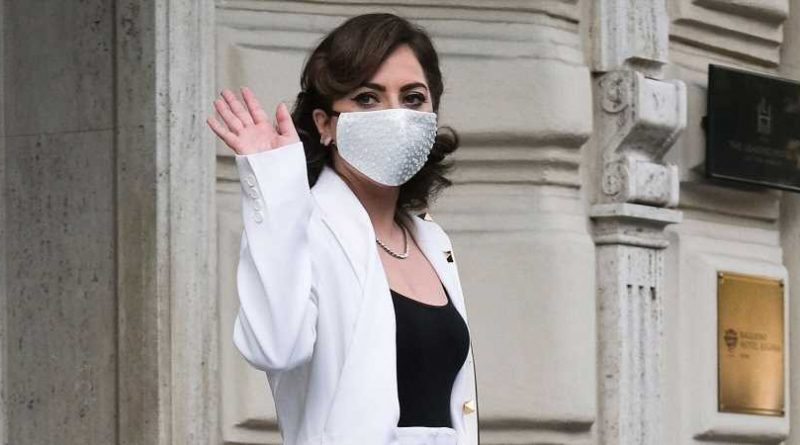 Rome, herself a great beauty, loves dazzling celebs — and Stefani Joanne Angelina Germanotta is soaking up the dolce vita in her 5-star suite on the Via Veneto. Here to film Ridley Scott's new thriller, "House of Gucci," Lady Gaga ducks fans and Rome's feisty paparazzi under a canvas awning from the hotel to her limo.

From there she crosses the city to the Cinecittà studios where she is starring as Patrizia Reggiani who, in 1995, was convicted and sentenced to twenty-six years (she got out after seventeen) for orchestrating the murder of her husband Maurizio Gucci, scion of the luxury brand dynasty.

As the Eternal City braces itself for more Hollywood power with the arrival of co-stars Al Pacino, Jeremy Irons, Adam Driver, and Jared Leto, the queen of pop says that on time off from the set she wants to discover the real Rome.

Her top pick is the Pantheon, and there's no denying the 1st-century Roman temple dedicated to all the gods is one of the city's most eye-popping sights. Of course she must also see showstoppers like St. Peter's Basilica and the Coliseum, and the Spanish Steps and the Trevi Fountain are just a short walk from her hotel.

For the Gucci role Gaga sports a retro look with dark bouncy curls, and with sunglasses she could easily blend in with the locals, but if she prefers wheels she should take an electric car. In one of these ecological two-seaters (with her own driver or a guide) she can get into streets and right up close to monuments that are off limits to limos.

After these must-dos, I'd love to show her places in the city associated with famous and flamboyant Gaga-style women. From ancient Roman first ladies to movie stars, and from ground-breaking Medieval artists to saints and ghosts; The kind of human stories that bring Rome alive, making it much more than just the world's most jaw-dropping open air museum. Down the road from her hotel, tucked away past the Spanish Steps, the Via Margutta is a quaint little bohemian street that has always been a popular haunt with artists and painters (Picasso stayed here), and is now dotted with upscale eateries and boutiques. It is forever linked to Audrey Hepburn who shot "Roman Holiday" here in vine-covered number 51 (then a sculptor's studio) when she was not zipping around the Eternal City on a Vespa with co-star Gregory Peck.

Next stop is number 110 which was home to actress Giulietta Masina and her husband, film giant Federico Fellini. His "La Dolce Vita" starred heartthrob Marcello Mastroianni and Anita Ekberg who, wearing a stunning black ball gown, made movie history dancing in the Trevi Fountain (did you know this stunner is named for the three streets — tre vie — that converge on the little piazza?)

Gaga says that as a travelling companion she has a ghost called Ryan. Well, if Ryan is in town he can catch up with some famous — and infamous — fellow spirits. Two of the most notorious are the ghosts of Beatrice Cenci and Olimpia Maidalchini, 16th-century noblewomen who haunt the bridges across the Tiber river.

The beautiful Beatrice plotted to kill her abusive father but was caught and beheaded, and is said to appear walking across the Castel Sant'Angelo Bridge, her bloody head cradled in her arms. The Castle, a former mausoleum and prison, is also famous for the final scene of Puccini's opera when the heroine, Tosca, throws herself from the top story to her death. No big deal for Gaga, of course: Wearing a glittering bodysuit she jumped off the roof of a Houston Stadium for the 2017 Super Bowl.

Donna Olimpia was quite another kettle of fish. Born into a humble family, this ambitious social climber married the brother of Pope Innocent X. As the pope laid dying, Olimpia grabbed armfuls of gold and valuables from the papal palace, and my Roman friends shiver when they tell me she is seen at night, seated in a black carriage clutching her ill-gotten spoils as she flees over the Sisto Bridge.

One of the things I love about Rome are its seven hills and their fantastic views. The Palatine Hill, a short walk from the Roman Forum and the Coliseum, overlooks the Maximus Circus where chariot races were held  (remember Charlton Heston in "Ben Hur?") and was the Beverly Hills of its day.

Imperial Rome's wealthy nobility built luxury villas up here, and one of the most magnificent belonged to first lady Livia Drusilla. Wife of the emperor Augustus, charismatic Livia was the empire's Jackie Kennedy and, after her death, was declared a goddess by her grandson the emperor Claudius.

Another of the seven hills that is going to sound very familiar to Gaga is the Capitoline. Here she can admire the statue of a venerated female legend: the she-wolf who suckled the twins Romulus and Remus who founded Rome in 753 B.C. It also has a spectacular staircase, the Cordonata, designed by Michelangelo. The low, sloping steps that were once used by men on horseback would be a stunning setting for a drop-dead-gorgeous Gaga photoshoot. I can also see her posing on Michelangelo's twelve-pointed star design piazza which is the Umbilicus Urbis, the Navel of the City of Rome.

On the way back to the hotel I'd make one last stop at the Villa Spada art gallery to see a portrait that will blow her away. It's of Saint Cecilia, virgin and martyr, who is no less than the patron saint of music and singers. It was painted by Artemisia Gentileschi, a brilliant young artist who, in the early 1600s, shattered the glass ceiling of the male-dominated Medieval art world.

The colonnade in the villa's courtyard is another one-off. Thanks to a trick of perspective it looks to be thirty-seven meters long, when in fact it's only eight meters in length.

With Rome's most popular sights quite empty this Spring, Lady Gaga will be seeing the time-hallowed Eternal City at its sparkling best. It's all right there for the taking.

Nearly Half of Surveyed Americans Planning Overnight Trips in 2020