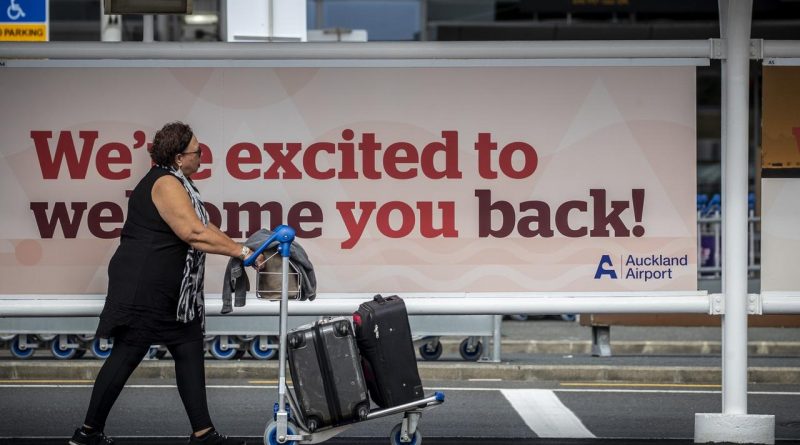 Thousands of Australians desperate to get back to the lives overseas are risking huge fines and possible imprisonment by using the Trans-Tasman travel bubble as an escape route.

One of the first Aussies to test the loophole was art teacher Tim Byrnes who flew to Auckland last week and caught a flight to Istanbul on Friday with plans to travel on to Russia to return to his job and girlfriend in Moscow, Nine Newspapers reported.

“I’ve escaped. I get to go back to my life,” Mr Byrnes, who had been living in Russia since 2016 before becoming stranded in Australia by the pandemic, said.

RELATED: Trans-Tasman travel bubble, the difference between Australia and NZ

Ashleigh greets her mother Marleen at Auckland Airport and introduced her grandson Boston to her for the first time. Picture: Michael Neilson/New Zealand HeraldSource:Supplied

Many other Aussies are reportedly looking at the strategy as a way of travelling overseas and being reunited with their families after more than 12 months of forced separation.

Border officials in Australia and New Zealand have confirmed the loophole does exist, according to the Australian Financial Review, allowing travellers to book flights to a third country – although it does come with its own risks.

Australians looking to use New Zealand as a port to go overseas could be slapped with a massive fine or even be jailed under newly changed laws.

Since the two neighbouring countries entered into the quarantine-free arrangement on Monday, thousands of people have travelled between the ANZAC nations.

Some were quick to point out the Kiwi nation could be used as a port to travel further abroad, as New Zealand does not have laws forbidding overseas travel without an exemption like Australia does.

But Health Minister Greg Hunt was quick to put an end to the scheming, amending the Biosecurity legislation to specify that Australians could not use NZ as a port to go overseas.

Under the Act, which was amended on Monday, anyone who breaks the rules can be fined up to $63,000 with the minimum penalty being $6300.

They could also face five years in prison if found guilty.

However, the changes exclude those who must travel for compassionate reasons, such as where a close family member is seriously ill or has died or for urgent medical treatment.

Australia closed its international borders in March last year in a bid to stop COVID-19 from spreading across the nation.

Residents have been banned from leaving the country without an exemption, with Australian citizens being the only people allowed to enter.

The Health Department said travellers should be aware that international travel to any other country, except New Zealand, continued to pose a “significant risk to public health”

“For that reason outgoing travel to other countries remains restricted,” a department spokeswoman said in statement.

“Australians considering travel outside of Australia or New Zealand are still required to apply for an exemption from the outgoing travel restrictions through ABF, and ensure they review the information available on Smartraveller relevant to their destination.”

Hundreds of people travelled to Sydney Airport to board the first flights bound for NZ on Monday.

At the time, Prime Minister Scott Morrison said starting the trans-Tasman bubble was a “milestone” and a key move in both tourism and economic recovery for both nations.

“Today’s milestone is a win-win for Australians and New Zealanders, boosting our economies while keeping our people safe and just in time for ANZAC Day,” Mr Morrison said.

“Both countries have done a remarkable job in protecting our communities from COVID and two-way flights are an important step in our road out.