Home » Active Travel » Here's What It's Like to Design a Theme Park, According to a Legoland New York Ride Designer 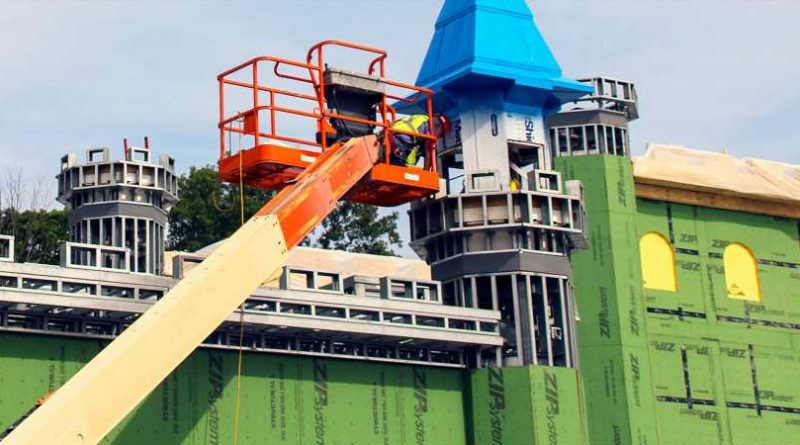 Legoland New York will be the first major theme park to open in the northeast in over 40 years when it debuts in New York's Hudson Valley — just 60 miles from New York City — later this year. With seven themed lands and over 50 shows, rides, and attractions, the theme park is set to become the area's top family-friendly destination, complete with a Legoland Hotel.

For a self-professed theme park nerd like me, there are few things more exciting than the opening of a brand-new theme park. They're essentially a blank slate where theme park designers can build an immersive and entertaining experience made up of fan-favorite rides and innovative, new attractions for a fresh audience. But how do theme parks go from concept to reality? So much goes into their design, so we asked Andy Martin, Legoland New York ride designer and creative lead at Merlin Entertainments, all about his experiences working on the new theme park resort. In a nutshell, it sounds like an absolute dream job. Travel + Leisure: What does a day in the life of a Legoland ride designer look like?

Andy Martin: "The Lego brand is all about play, and we try to channel the spirit of that daily through everything we do during the design of a new park or attraction. The beauty of play is just how many different forms it can assume. Cliché as it may sound, but the lack of a typical day has been one of the single most satisfying aspects of working with this brand for more than six years. Although my formal training is in architecture, there have been a countless number of pinch-me moments for which no university lecture could have prepared me.

Whether it's scheduling a Zoom call with your colleagues to decide which hat would look best on a musically gifted elephant or using a combination of paint and interpretive dance to describe the scenic finish of an ancient underwater temple to local artists, each day keeps our creative adrenaline running at maximum capacity.

What does remain consistent, however, is our use of one of the greatest design tools available: the Lego brick. Every building, prop, and ride vehicle in the park will have at one point been built out of actual Lego bricks before being scaled up 25x to become buildable construction drawings. This means that almost everything our guests will see in the park can very much be built using their own collection of bricks back home. As huge Lego fans ourselves, we think that's pretty cool!" When you're working on the creation of a brand-new theme park like Legoland New York, how do you decide which rides and attractions will be included?

"With Legoland New York soon to become our ninth resort worldwide, we have approached its lineup with equal amounts of greatest hits and hot newness. Iconic attractions like the Dragon coaster and Driving School — nostalgic even from my childhood — will be returning bigger and better than ever.

When it comes to the exclusive new offerings that are coming to our New York location, the Lego Factory Adventure ride has to be my personal favorite. Guests will join Professor Brick on a thrilling and unpredictable tour of the Lego factory, where their ride journey will follow a theme park designer's unique take on how a Lego brick is made — from the start of a brick's life as a mere pile of tiny granules, to being melted down by the intense fire of our resident dragon (Gary), until they are ultimately molded into shape by our expert team of acrobatic elephants. It's a thrilling and dynamic trackless dark ride that utilizes the latest in state-of-the-art technology to create a truly personalized adventure. Oh, did I mention that at the culmination of the journey, lucky riders might even be transformed into Lego minifigure versions of themselves? Nothing like it has ever been done before in an attraction, and the result is nothing short of magic." We're excited for the debut of the Lego Factory Adventure ride — can you describe how a ride like that goes from concept to reality?

"Our design team believes that guest participation is one of the most effective methods through which we can immerse our visitors within a story or setting. Whether it's handing them the keys to drive their own car or boat for the first time, or throwing them a rope to climb up a medieval castle turret, these elements of hands-on play transport the kids to a reality in which age is no obstacle and anything is possible.

We knew that we wanted interactivity to play an important role in the Factory Adventure ride, but we felt the attraction's story called for a fresh approach that combined variety and surprise with technology that is virtually invisible to guests and requires little to no explanation. For instance, as you ride through the factory, you may encounter the facility's resident sleeping dragon. For this interactive, we looked at simple, tried-and-tested methods used by entertainers at kids' birthday parties. Depending on how loudly or softly the guests 'roar' at Gary, this will actually impact the way in which he wakes up. Using projection mapping as a layer on top of a physical (not to mention, spectacular) Lego brick-built dragon, the cause and effect of the guests' actions should feel very real and tangible."

What is your favorite type of ride?

"Personally, I can never get enough of a fantastic dark ride. When executed well, they can be the exemplification of everything a great theme park strives to deliver. Due to the complete control that designers have over the environment in a dark ride, from lighting to scent, these attractions can transport us to worlds and tell stories that were previously only possible in our imaginations. We hope the Lego Factory Adventure is no exception to this high standard."

What is your favorite ride that you've worked on?

"Legoland Japan will always hold a special place in my heart as the first complete theme park project I was lucky enough to be involved with from start to finish. Living and working with the incredible team in central Japan is an experience I will never forget. That being said, our design team is never complacent and we're constantly trying to outdo ourselves with the most current project. We're counting down the days and hours until we can celebrate the grand opening of Legoland New York and the Lego Factory Adventure ride with everyone. It will be the culmination of five years of incredible memories, both professional and personal, that our team will certainly treasure for years to come."

Elizabeth Rhodes is an associate digital editor at Travel + Leisure who loves all things theme parks. Follow her adventures on Instagram @elizabetheverywhere.