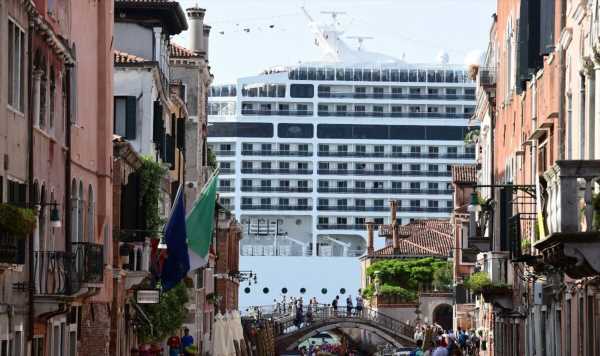 Despite a difficult couple of years during the pandemic, cruise holidays remain extremely popular. But the ships can be controversial and the industry has faced protests, bans and soaring taxes in recent years.

Dr Clare Weedon, principal lecturer in tourism and marketing at the University of Brighton, told Express.co.uk: “Dubrovnik, Venice, Barcelona and all the big destinations were fed up with over tourism and of course they target the cruise ships because they’re the most visible. People seem to either love or hate the ships.”

Barcelona has announced it will increase taxes for cruise passengers while large ships are now banned from the Venice lagoon.

Aside from the crowds, many locals feel resentful about the industry as tourists do now spend much money in the destinations they visit.

Express.co.uk previously spoke to Bengt Waldow, an anti-cruise campaigner based in Norway, who has called for a total ban on ships.

Firmly a cruise ship hater, he said: “Cruise tourists only leave trash and pennies and move around on those horrible Hop on and off buses.”

Although some cruise tourists may spend the night in a destination at the start or the end of the cruise, the majority spend most of their money onboard.

“Economically they’re not particularly good for a destination. If it’s just a port of call, the amount of money people spend is really tiny,” said Dr Weedon.

The bans will mainly impact larger cruise ships with some ports planning to introduce limits on the size of vessels.

Dr Weedon said: “When Covid hit I think it did make a lot of cruise industry executives think a bit. I really think we’ve reached the top in terms of capacity.

“I think cruise ships are going to get smaller and the ships will probably divide into the mass market and more sustainable options.

Dr Weedon said the smaller ships are likely to become more luxurious to cater to a different market from mega liners.

Some of the new rules have even been welcomed by boutique cruise lines, including Uniworld Boutique River Cruises.
One of Uniworld’s ships suffered extensive damage in 2019 when a much larger ship crashed into it in Venice.

Chris Townson, Managing Director UK & Ireland for Uniworld Boutique River Cruises, told Express.co.uk: “As a boutique river cruise provider sailing along the Venetian Lagoon, we were thankful to the Venetian authorities for the larger vessel bans as this helps to protect the city’s precious buildings and environment for the enjoyment of citizens and visitors for years to come.

“Uniworld’s Super Ship La Venezia caters for a maximum of just 126 guests and spends a full week in the city, surrounding islands and sails down the Venetian Lagoon– something that a half-day tick-box visit from a big cruise ship docked outside the centre can never come close to replicating.”

But mega ships remain popular and Royal Caribbean just shared the plans for its next ship. Icon of the Seas will become the largest ship in the world and will carry over 7,500 people.
For many customers, the ship is a destination in itself with ziplines, promenades, a living park, laser tag and more onboard.

However, Ben Bouldin, director of EMEA for Royal Caribbean told Express.co.uk that destinations and itineraries remain important to customers.

He said that the line “wants to be respectful of communities and add genuine economic value to the locations we go to.”

Many larger vessels have navigated the bans by docking in ports outside the main destinations. Ravenna is a popular option as it’s only a couple of hours away from Venice.

Dr Weedon added: “The cruise industry doesn’t like to be dictated to in terms of access. The larger ships will go into cheaper, more freight style ports and then bus people in. I think it kills two birds with one stone as they don’t have to talk to the ports.”

Coronavirus: Wish this was your quarantine? Cruise passengers to stay on holiday island