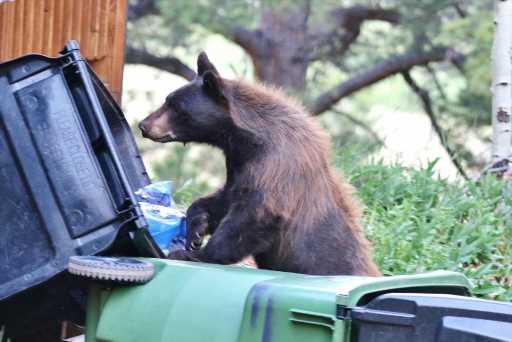 With hungry bears beginning their annual feeding binges to fatten up for winter, Colorado Parks and Wildlife is warning Coloradans to guard against leaving food where it can attract them and cause interactions with humans.

Just in the first week of August, a bear broke into eight cars one night in the Fall River area near Estes Park, according to CPW. One also broke into a nearby resort hotel four nights in a row. CPW isn’t sure if it was same bear or two different ones, although the incidents occurred in close proximity to each other.

“Then all of a sudden he just disappeared, as soon as they came and set a trap for him,” said Sandy Garcia, co-owner of the Della Terra Mountain Chateau just outside the Fall River entrance to Rocky Mountain National Park. “I don’t know if somebody else did something to that bear, or the bear was so smart he knew there was a trap.”

Bears have entered their period of hyperphagia when they spend up to 20 hours a day trying to consume more than 20,000 calories daily in preparation for winter hibernation.

“It will really ramp up here in the next couple of weeks or so, and peak in September, October,” said Jamin Grigg, a CPW senior wildlife biologist. “Then the bears will start to slow back down prior to entering the den.” That happens in late November or early December.

One night at the Della Terra resort, Garcia said, a bear broke through a window and entered an unoccupied cabin, opened a refrigerator and ate the food in it. Another night, the bear broke into a cabin where two people were sleeping. They called the innkeeper, who responded and chased the bear away. On still another night, the bear broke into the resort’s main building, raiding a candy stash before the innkeeper shooed him away.

“It is a standard thing around here,” Garcia said. “You talk to anybody in Estes Park and you’ll probably get the same story. Unfortunately, this particular bear was a little more aggressive. He got into a unit, got food, and once they get food they tend to be a little bit more adamant about what they want to do.”

They are smart, too.

“They’re like a mix between a human and a big dog, and they learn quickly,” Grigg said. “They can certainly figure out car doors, house doors, latches. A lot of the bear-proof containers out there are pretty sophisticated, because that’s what it takes to keep a bear out of it.”

CPW has a video of a bear standing on its hind legs, unlatching the door to a pickup truck, pulling out an ice chest to use as a stool, climbing up and grabbing someone’s food bag.

CPW estimates that there are 8,000 to 12,000 bears in Colorado. Grigg said this figures to be a good year for them to find natural food sources in the wild such as berries, acorns, choke cherries and mushrooms because much of the state got decent rainfall this summer.

That doesn’t mean some bears won’t be prowling neighborhoods in the foothills and the western suburbs looking for easy pickings. Some may even penetrate further into the city via creeks.

“They follow riparian corridors because they tend to have a lot of natural bear foods – a lot of berries, choke cherries and that sort of thing,” Grigg said. “The other thing that draws bears down into town in the fall, or along the urban interface, the fruit trees are starting to bloom. Ripening fruit from fruit trees is one of the main attractants for bears late in the summer or the fall.”

CPW has compiled a long list of dos and don’ts for “bear-proofing” homes, including keeping garbage in secure locations, not putting garbage out until the morning of pickup, cleaning garbage cans regularly, using bear-resistant trash cans or dumpsters, taking bird feeders inside, cleaning barbecue grills after every use, picking up fallen fruit before it rots and keeping garage doors closed.

Bears caught in urban areas are captured and released in the wild, but repeat offenders get euthanized.

“I think most people in the state care about wildlife, want to see wildlife conserved, and want to do their part to cohabitate with wildlife,” Griggs said. “Unfortunately, most of the bear conflicts that we have are human-caused. Most of them have to do with bears getting into human trash or dog food or bird feeders, starting to get comfortable around humans, getting fed and then starting to break into homes. That’s when we end up having to put a bear down. Most bear conflicts are preventable, so if we just do our part, we can almost always manage those conflicts and keep a bear from getting into trouble.”

Travel Experts Name the Most Historic Hotel in Every State

Heathrow Terminal 4 to remain closed until end of 2021