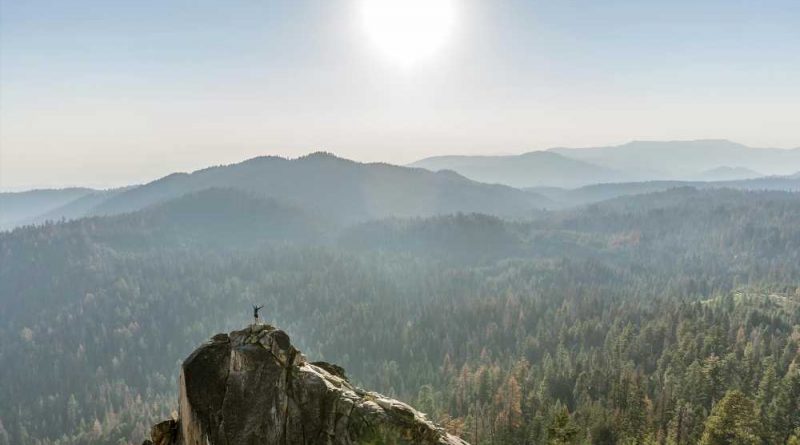 Martinez dismissed the dream, although the scenario was all too likely. In 2015, the Corinne Lake Fire had halted 30 feet from her living room window. Fires were increasingly a reality of mountain life, but never on this scale. In its first 24 hours, the Creek Fire engulfed 45,000 acres. It would go on to become the largest single fire in California history.

That Labor Day weekend, as smoke and falling ash blotted out the sun, local police swooped down in helicopters, urging residents to leave. Martinez loaded her two children, three dogs (a pitbull, a dachshund, and a border collie), and her mom into her green Saturn, and headed to a hotel in Oakhurst. “I left everything behind,” she says. “I didn’t even take blankets with me; I just figured the hotel would have them.”

The Creek Fire spared Martinez’s house, and North Fork as a whole, but it wreaked havoc on the surrounding wilderness. In a matter of weeks, the blaze tore through 379,895 acres, or roughly a third of the Sierra National Forest. Amid the scramble to keep homes (and some unsuspecting hikers) safe, one of its casualties was a little-known driving route called the Sierra Vista Scenic Byway.

If you haven’t heard of the byway, that’s partly the idea. The 82-mile loop through the Sierra Nevada foothills is known as a “secret Yosemite,” and it shares similar features with its more celebrated neighbor to the north. There are plunging green valleys, granite peaks, and winding two-lane roads that can lead to waterfalls, giant sequoias, and boulder-strewn lakes. Mostly, it’s a way for nonbackpackers (like me) to feel the exhilaration of being up in the mountains without actually climbing.

For those reasons, plus the fact that you don’t need a visitor’s pass to see it, I decided I had to go. Then I found out that the road overlapped almost exactly with the epicenter of the Creek Fire. I wondered: Would there be anything left to see?

The Sierra National Forest’s website announced a road closure that had been extended through June 2021, though it didn’t specify which roads. The ranger’s office wasn’t much help, either. When I called asking if the route was still drivable, a tense voice answered: “I wouldn’t. For one thing, it looks like a moonscape.”

The ranger was probably trying to spare me a disappointing trip. But I wasn’t so easily deterred.

On a recent Thursday, I drove up to North Fork to see the route for myself. It was a clear morning, in the high 70s, though the temperature began to drop as I climbed higher into the mountains. I chose Minarets Road, which runs up the eastern half of the byway—partly because it was close to my Airbnb, and partly because this was the portion of the route hit hardest by the Creek Fire.

My car hugged the curves of the road, which rimmed a gaping valley to my right. Alone at 5,000 feet, I felt an overwhelming sense of peace. It would’ve been a triumphant moment, but something was missing from the view: greenery. All around me, blackened trees reached up like charcoal spikes, branchless and leafless. The undulating hills were rendered on an epic scale, but everything was bald and bare. Typically, evergreens would be there to add richness and texture to the hills. But with the canopy decimated, there was nothing to break the uniform gray. It felt empty.

I had reached Mile High Vista, so named for its 5,400-foot perch over the San Joaquin River canyon. Here, you can see the snowy peaks of Mammoth and the deep cerulean where reservoirs formed like jewels in the mountains’ crevices. All of that grandeur was there, and yet there was nothing to guide the eye. From where I stood, traces of the burn were everywhere.

For decades, the Sierra Vista Scenic Byway has offered a more intimate view of the Sierras compared to Yosemite. That sense of privacy made it perfect for the kind of socially distant retreats that people craved last summer, when COVID fatigue was peaking. “Last year, we were encouraging people to spend time on the byway,” says Steve Montalto, the creative director at Visit Yosemite. “We said, ‘Go up, enjoy, do the whole loop.’”

But as the fire ravaged the area, Montalto and his colleagues switched tack. They actively steered people away, while silently agonizing over the fate of the byway’s most famous landmarks, like the Jones Store, Globe Rock, and Mammoth Pool. Luckily, those places survived. But in the aftermath of the fire, tourism on the byway remains a touchy subject.

“If people are interested in [seeing it], we encourage it. But we’re not going to really promote it,” Montalto says. Driving the byway, I saw what he meant: The road had scorch marks from where burning trees melted the tarmac. Most of the campgrounds were closed, too, which gave the place a ghostly feel. “For some people, it may be more of an acquired taste,” he admits.

That’s not to say it wasn’t worth exploring. On my drive, I continued past Mile High Vista and ended up pulling over in a glade where orange pine needles littered the ground. The pine trunks were intact, but charred to a crisp. I walked past them, and squatted by a shallow brook, where grass rose thick and green against the copper mud. Trails of tiny bubbles rose to the surface, and the sun glinted off the edges of wet leaves.

I  sat there for a while, watching blue dragonflies dart over the rocks and wide-legged water spiders straddle the stream. On the far bank, a magnificent row of ferns flourished in the shade. There was a light breeze, chirping birds, the sound of flowing water, and not much else.

“Change is an inevitable part of living here,” Montalto says. In many ways, driving through this burned stretch of the byway had an illuminating effect. All the things I love about forests—the shade, the lovely wildlife, the deep sense of protection—took on new meaning, once I saw them stripped away. I started to think about how precious these ecosystems really are.

Historically, controlled fires (otherwise known as “prescribed burns”) have been a healthy part of any forest—Yosemite included. Without them, the forest floor fills with branches and dead trees, which can fuel worse fires later on. This is an important distinction to make for visitors, who might equate the sight of smoke with disaster. But, as Montalto points out, when the Forest Service identifies small fires within controlled perimeters, it’s their job to allow them to burn.

The inevitability of fires—both helpful and harmful—is something I heard several locals talk about, including Mike Arechiga, 62, a climbing instructor and Airbnb owner. Reflecting on the recent Creek Fire, he says: “It’s not the end, it’s the beginning.” Despite the significant loss of trees and the distorted landscape, fire events like these are simply a tool for regeneration.

While Arechiga says he misses the greenery, he points out that future generations will benefit from the regrowth. “It’s going to be sensitive for a while until the plants can root in again,” he says. “People have to be patient.”

Arechiga likes to spend his off-time at the Jones Store, a charming roadside diner in Beasore Meadows that’s been electricity-free since 1936. The freshly baked pie has made the store an essential stop for hikers and campers in need of a home-cooked meal. But last year, when its owners were forced to evacuate, Arechiga prepared himself for the worst. “When I left here that night, I did not expect to come back and see the Jones Store standing,” he says.

And yet, it stands. The Jones Store is in the western portion of the byway, which largely escaped the inferno. Driving here, along Beasore Road, you’ll see tall, healthy-looking pines with moss on their trunks and enticing meadows with horses grazing. Arechiga calls it “the last remaining green strip.” Here, all is pleasant, pastoral, and in bloom. In fact, without driving the byway’s other half, you would never know a fire had touched the place.

For travelers’ sakes, I hope the Jones Store lives on for another 100 years. But I also wonder, how long will it be until the next blaze strikes? Arechiga pointed to the defunct logging industry as the reason why the forest has become so overgrown, and thus susceptible to volatile fires. (In the last seven years, two major fires have threatened the Sierras: the French Fire in 2014, and the Ferguson Fire in 2018.) He acknowledges that climate change is a factor, but he believes increased forest management—like removing dead trees—would keep catastrophes like the Creek Fire at bay.

By some estimates, the state of California should be burning a million acres of forest every year, just to reduce the undergrowth that has accumulated. This doesn’t spell great news for tourists, who expect a pristine wilderness to greet them. But without some kind of preventative measure, pretty soon there could be no wilderness left to enjoy.

In mid-October, forest engineer Antonio Cabrera joined a team of 20 hydrologists, archaeologists, and biologists to assess the damage from the Creek Fire. In his career, Cabrera has worked on the King Fire in El Dorado, as well as others in the Sierras. But he found the Creek Fire unsettling, not just because of its size, or the intensity of its heat, but also because of how it affected the main roads that link the different parts of the forest—namely, the byway.

“I haven’t seen anything like this before,” he says.

As a transportation hub, the byway is simply too valuable to remain a disaster site for long. Last month, $4.125 million was allocated by the Great American Outdoors Act to make improvements on the byway—a major step forward in protecting the future of this beloved route. (Another $5 million has been set aside to rebuild the campgrounds.) And in 2022, the Norris Creek Bridge, which perished in the fire, will reopen.

It could be that Arechiga was right—this isn’t the end, but the beginning of a new chapter in the byway’s history. Before the Creek Fire hit, visitation to the byway was up twofold, according to traffic data shared by Cabrera. The fire may have threatened an already fragile ecosystem but didn’t erase it entirely. Charred or not, there’s still plenty to see.

For residents like Ariana Martinez, the uncertainty of another fire season weighs heavy. After she returned from her evacuation in Oakhurst last year, her coffeeshop was a shambles. Ash had swept in under the door, and it covered the espresso machine and syrup bottles. It took her two days to clean, but then, slowly, things went back to normal. The roads reopened, and customers returned.

>> Next: 7 Classic California Road Trips to Drive in Your Lifetime

10 Best Places to Travel in May

How to turn your house into a luxury hotel