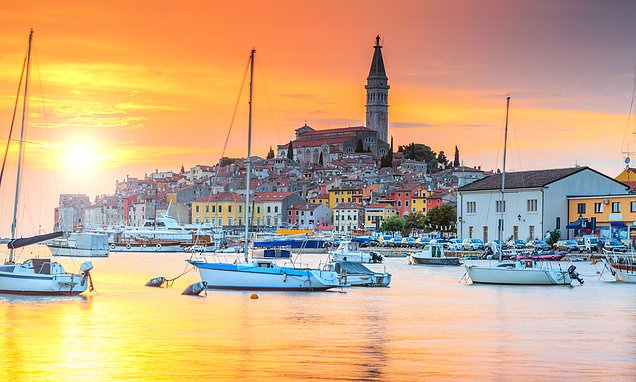 The lure of Little Venice: Falling in love with the Italian influences, gentle waters and luxury glamping of Croatia’s heart-shaped Istrian peninsula

Gaze up at the ancient limestone walls of the Arena in Istria’s capital, Pula, and it feels almost possible to hear the roar of the crowds who flocked here for the gladiatorial games, although these days you’re more likely to hear the chilled-out tones of pop star Sting performing than the clash of swords. This dazzling structure, one of the best preserved amphitheatres in the world, is just one of the stunning sights in Pula that stand testament to the Romans’ 700-year reign.

Yet this bustling city at the southern tip of Croatia’s heart-shaped Istrian peninsula wears its impressive history lightly. Roman ruins are dotted around the place almost casually, rubbing up against the cranes and shipyards of its industrial port.

We enjoyed the unlikely juxtaposition – Pula feels like an authentic working city rather than a tourist trap set in aspic.

Ancient beauty: On a tour of the Croatian region of Istria, Eve McGowan explores the sights of its capital, Pula, which include the ‘dazzling’ Arena, one of the best-preserved amphitheatres in the world 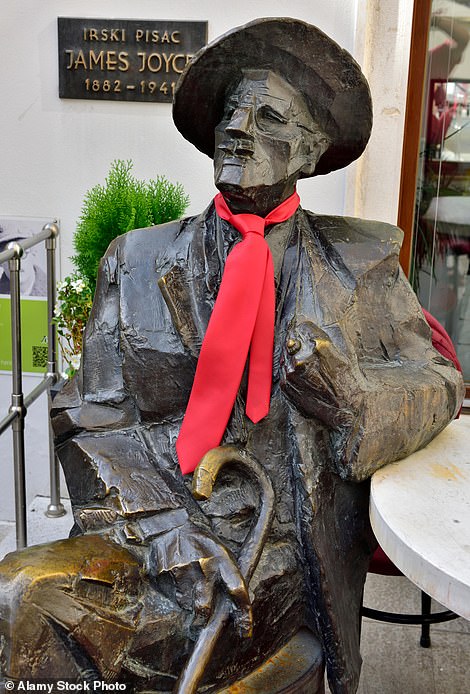 James Joyce spent a short stint teaching English in Pula. A statue of the writer sits outside Cafe Uliks (pictured)

You can enjoy a coffee in one of the cafes set around Forum Square, overlooked by the 1st Century Temple of Augustus, or follow in the footsteps of James Joyce and walk through Sergii’s Arch built at about the same time. Look out for the plaque and statue of Joyce on the terrace at Uliks (Ulysses) restaurant opposite – the writer spent a short stint teaching English here.

This region in the north-west of Croatia, bordering Slovenia and just a two-hour drive from Trieste in Italy, has a complex political history.

Over the past century alone it has swapped countries so many times that, as an expat friend explains, while today’s working-age Istrians might typically consider themselves to have been born in Yugoslavia, for their children it’s Croatia, for their parents Italy and for their grandparents Austria.

The Italian influence is perhaps felt most strongly in the cuisine – restaurant menus feature polenta, sardines and fresh pasta – in particular the delicious pljukanci, a slightly chewy, spindle-shaped pasta that’s a must-try, especially when served with the truffles for which this area is renowned.

And if you believe the hype, olive oil from Istria is among the best in the world.

The ravishing coastal town of Rovinj, a short drive up the coast from Pula, is known as Little Venice thanks to the pastel-coloured Venetian-era facades dropping straight down to the water by the pretty harbour. From here you can even take a boat trip to Venice itself, which takes three hours or so. 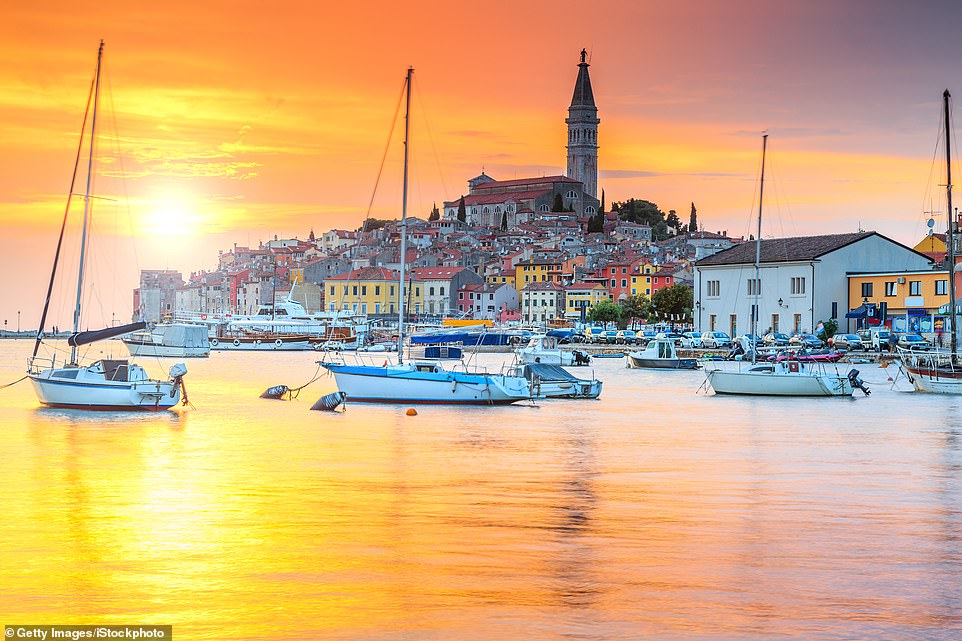 A highlight of Eve’s trip is a visit to the old town of Rovinj (pictured). ‘It’s Disney-pretty,’ she says 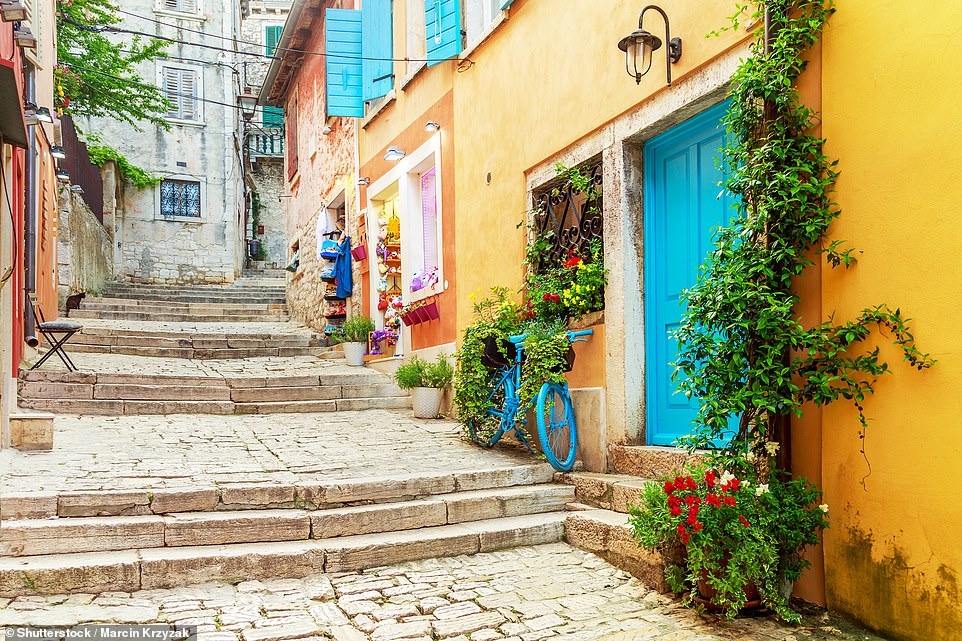 Rovinj’s old town was once an island, and homes were built increasingly higher in order to accommodate a growing population until the narrow strip of land that connected it to the mainland was widened. It’s Disney-pretty – the picturesque houses teetering higgledy-piggledy, washing lines hanging above the limestone cobbled streets which wind upwards to the Baroque St Euphemia’s church.

The town has an upmarket feel – on Grisia, the street of artists, artisans sell hand-crafted souvenirs direct from their workshops. There are smart restaurants – Monte at the top of the hill has Croatia’s first Michelin star.

For the best views, head to La Puntulina restaurant with a terrace that overlooks dreamy rocky platforms. At Valentino Champagne and Cocktail Bar next door, you can sip drinks in prime sunset-watching position from golden cushions arranged on the rocks, while Restaurant Orca, just outside town, has seafood to die for.

Istria’s first five-star hotel, Monte Mullini, opened in 2009 and is set into the hillside a short walk from the old town. 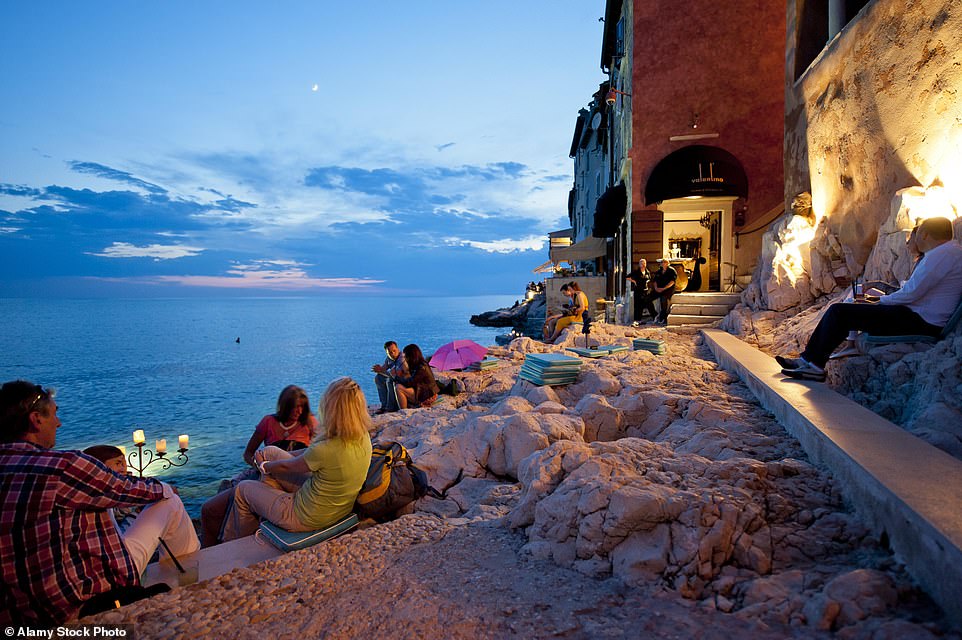 Valentino Champagne and Cocktail Bar, above, is one of Rovinj’s prime sunset-watching spots, Eve reveals

Our next stop is the beach at nearby Fazana – known as the town of sardines thanks to its long fishing tradition, and with its shallow water it’s the perfect spot to cool off.

The children dive for hermit crabs and in the distance we spot boats that leave several times a day for Brijuni National Park, a beautiful archipelago that was once home to General Tito.

These days an electric train ferries tourists around the sights on the largest of the 14 islands, including a safari park. 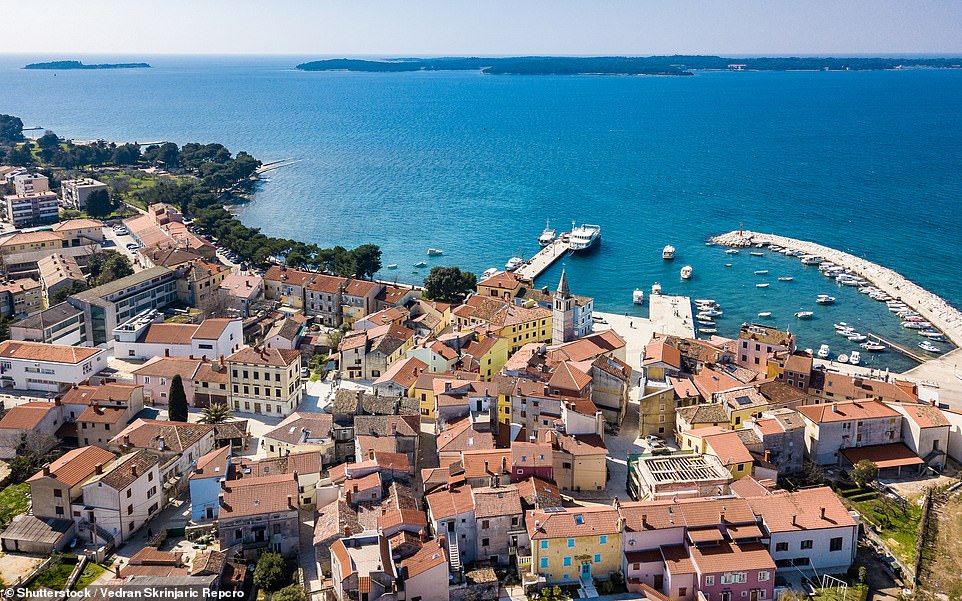 Eve stops by the beach at Fazana, pictured, which is known as the town of sardines thanks to its long fishing tradition 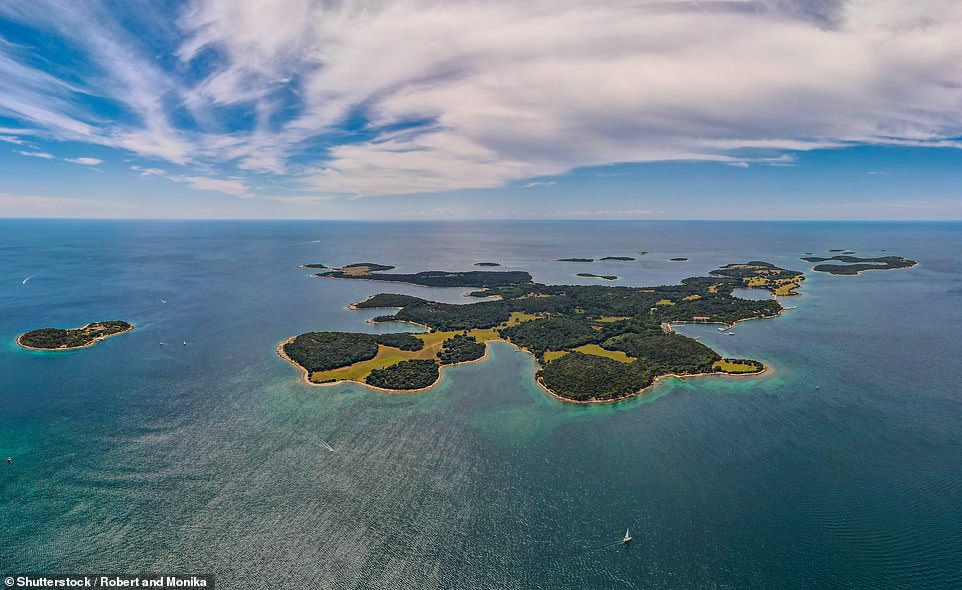 Boats leave several times a day from Fazana for Brijuni National Park (above), a beautiful archipelago that was once home to General Tito

We stay at Arena One 99 Glamping, which bills itself as Croatia’s first glamping resort. With about 200 air-conditioned cabins set among a pine-scented forest, its well-tended, car-free pathways (cycle hire is included) make it the perfect playground for a 12-year-old and nine-year-old.

The location on the banks of a coastal lagoon, inside the calm waters of Medulin Bay, five miles south of Pula, is hard to beat. Featuring beautiful beaches with comfy loungers, restaurants and a mini market, everything for a relaxed holiday is close at hand.

On arrival we’re ferried to our stylish waterfront cabin in a golf cart. We are experienced glampers but have never encountered anything quite like this – think hot tubs, a daily maid service, well-equipped kitchens and en suite bathrooms with Elemis toiletries. Guests can use an app to book a place in the free yoga class and massages in the spa. 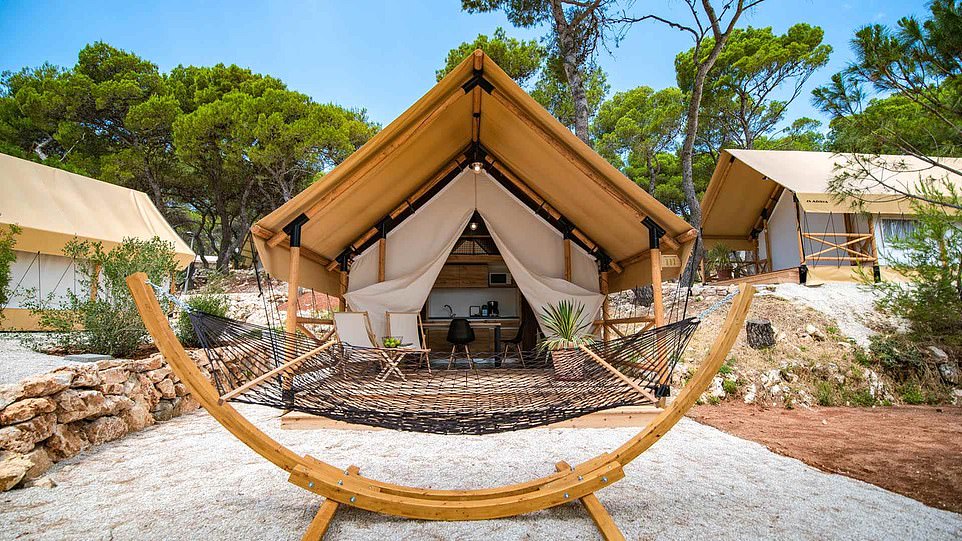 Eve stays at Arena One 99 Glamping, which has around 200 air-conditioned cabins (one of which is pictured above) set among a pine-scented forest 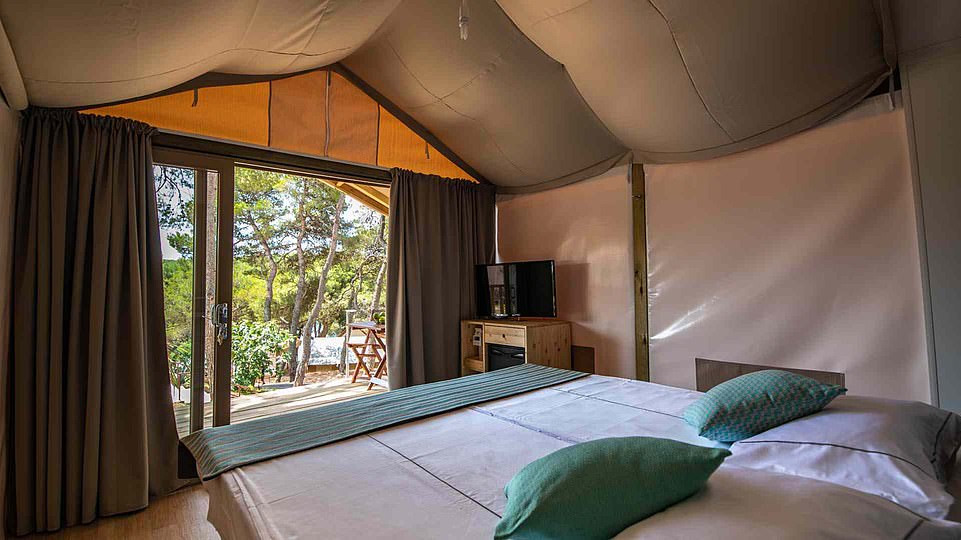 ‘We are experienced glampers but have never encountered anything quite like this,’ she says of the glamping site 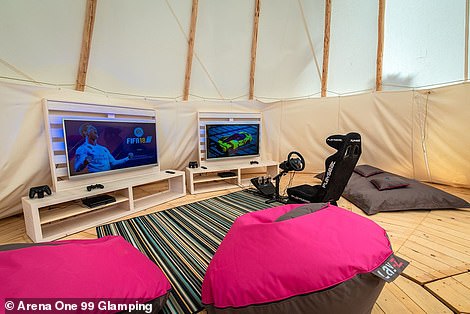 We quickly put the app to the test with a very British emergency – a request for a kettle. It arrives at our tent door within minutes.

The tween is in heaven when he finds out there’s a teens club featuring the latest PlayStation – there’s also a screen-free kids’ club for younger children.

Arena Glamping offers bike, kayak and boat tours of Cape Kamenjak, but we opt to hire a small motor boat from the surf centre (you can also book windsurfing lessons with a Croatian champion, and hire pedal boats, kayaks and paddleboards) and head off to explore under our own steam.

We pootle past islands, some with beach bars, eventually dropping anchor at an uninhabited one with only the gulls for company. Snorkelling here is magical. We spot dozens of spiky sea urchins for which this coast is well known – don’t forget to pack sea shoes! 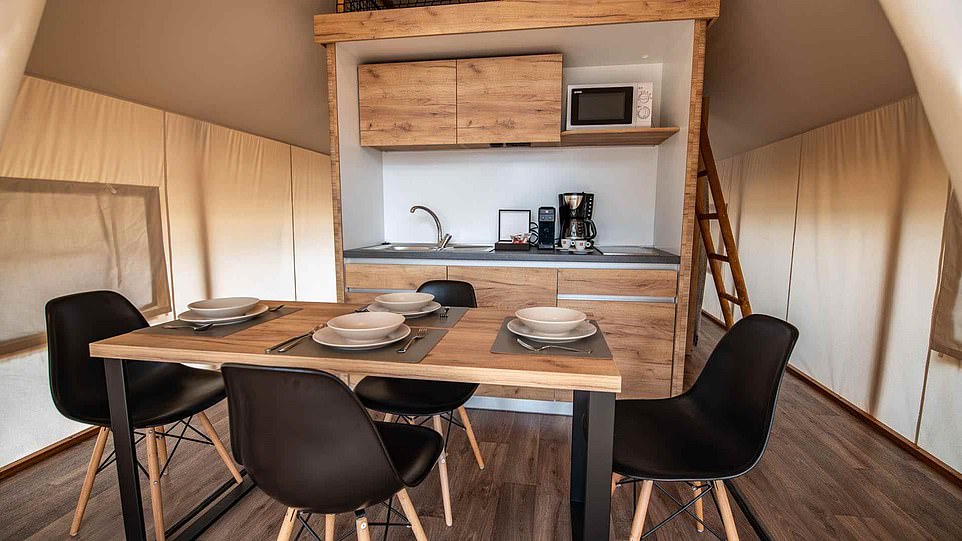 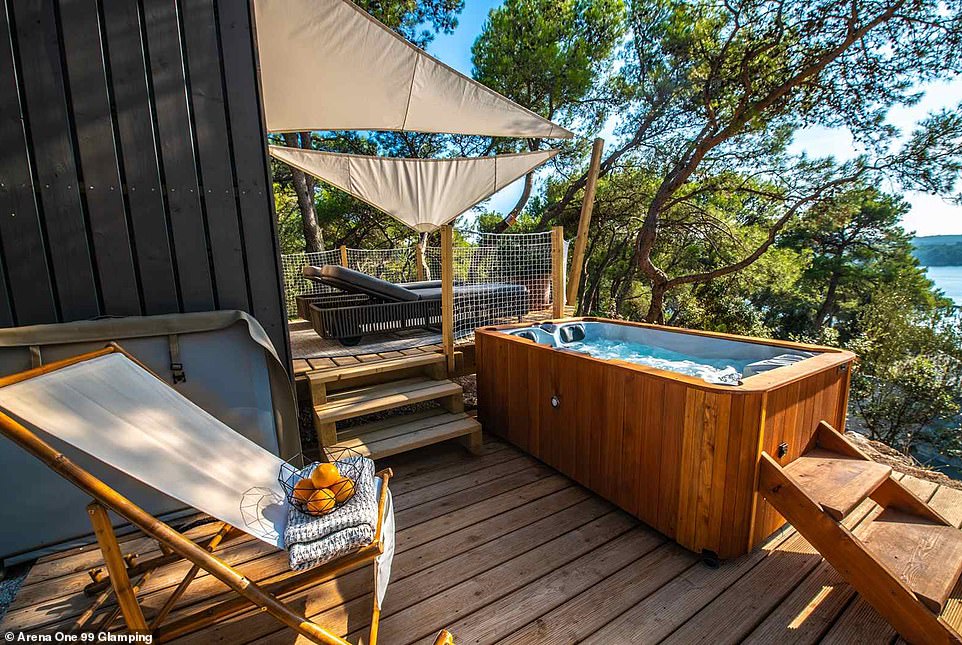 A hot tub at the glamping site overlooks the calm waters of Medulin Bay, which lies five miles south of Pula 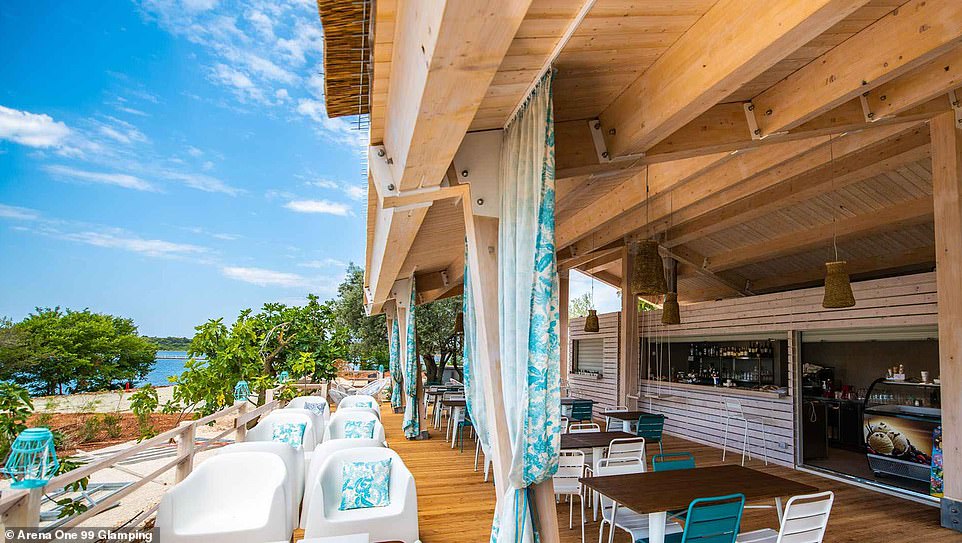 Describing Arena One 99 Glamping, Eve says: ‘Featuring beautiful beaches with comfy loungers, restaurants and a mini market, everything for a relaxed holiday is close at hand’ 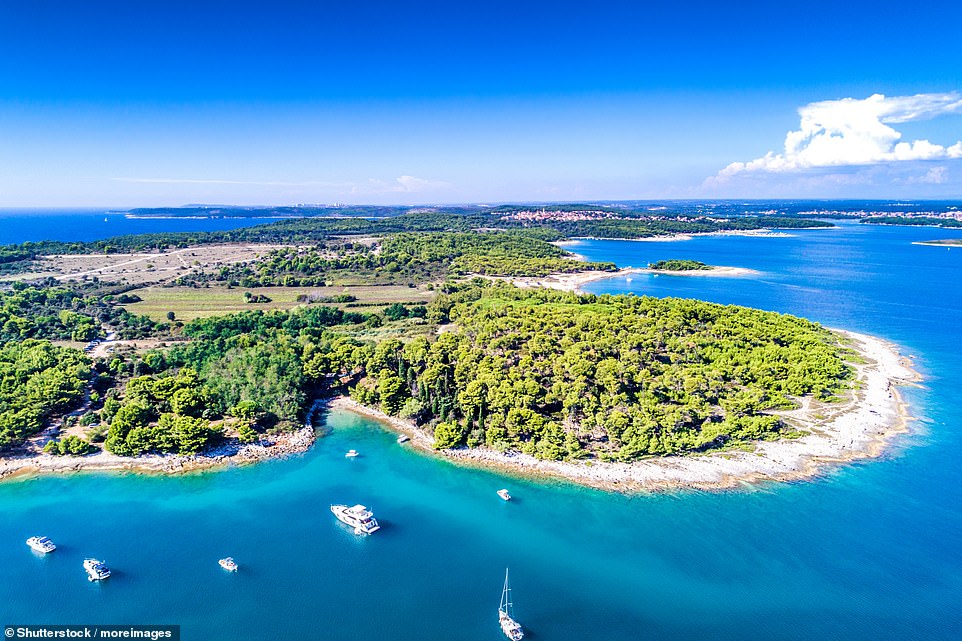 While the majority of visitors to Istria are Italian, German, Slovenian and Dutch tourists who can drive here or arrive by boat, it couldn’t be a better time for British travellers to dip a toe in the Adriatic.

Budget flights direct to Pula with Ryanair and easyJet, as well as British Airways, mean it’s cheap and easy to reach.

What’s more, Croatia doesn’t join the euro until 2023 – for now the currency is still the kuna – so if you’re quick, your pound will go much further than in other hotspots.

Eve McGowan was a guest of the Croatian National Tourist Board (croatia.hr). A waterfront two-bedroom safari loft tent at Arena One 99 Glamping costs from about £210 per night, with a minimum three-night stay (arenaglamping.com). 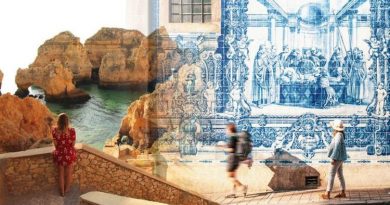 Expats: ‘Floods’ of Britons expected to relocate to Portugal in 2021

Covid-19 coronavirus: How tourism hotspot Croatia has fared during the pandemic