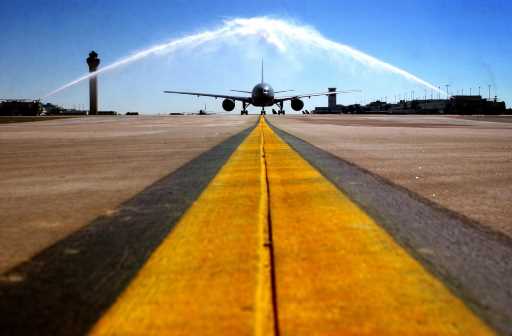 Colorado runners will have what could be a once-in-a-lifetime experience in September: running a race just before sunrise on an east-west runway at Denver International Airport.

The Denver 5K on the Runway will be held on Sept. 10 at 6 a.m. and is being organized by the Colfax Marathon, in cooperation with the airport operations team. A post-race party with breakfast and music will be held in a nearby United Airlines hangar.

“You’re going to be ‘taking off’ down the runway,” said Andrea Dowdy, chief executive of the Colfax Marathon, in an interview. “We’re going to have individuals with lighted wands, the kind ramp crews use to direct planes to their gates, and we’ll have the runway lights on.”

This will be a first for DIA. The idea for the event came from a similar race at Atlanta’s Hartsfield-Jackson International Airport.

“We are excited to offer this unique experience for the community to see DEN from a different perspective while enjoying the beauty of our airport and the surrounding landscape,” said airport chief executive Phil Washington in a statement.

Runners will start east on the runway, a half hour before sunrise, and will turn around to finish running west as the first rays of sunlight illuminate the mountains.

Dowdy ran the Mayor’s 5K on a runway at the Atlanta airport in 2018 and was enthralled. A year later, Colfax race director Creigh Kelley went to Atlanta to observe that race from an operations standpoint. After that, they began making plans to replicate the race here.

“Then COVID hit,” Dowdy said. “We just kept it under wraps and waited until we could move forward.”

DIA will shut down Runway 8-26, on the northeast side of the airport, on Friday night so the race course length can be certified.

“The FAA has given us final approval,” Dowdy said. “It involves so much of DEN (airport) operations, and it’s a runway that will allow us to utilize that United hangar for the party. Their operational team is fully on board with the course map.”

Whether the race is a one-time event or becomes an annual one — as is the case with the Atlanta race — is still to be determined.

“Right now the official agreement we have with DEN is that we are announcing this as a singular event,” Dowdy said. “We don’t know about beyond 2022. For them to do this with us, and do this for the community, is huge. It’s a lot of work on their part, and they’re really excited about the opportunity to be able to showcase the airport from a really different perspective. Post-race, they can determine if this is something we can do again in the future.”

Dowdy expects the race to sell out by midsummer with a limit of approximately 2,500. Within hours of the announcement Thursday morning, more than 1,000 runners had registered.

Disney World changing ticket prices and how to buy them

How This Boomer Made Peace with Traveling with Millennials