Walt Disney World Resort Orlando is a dream holiday destination for many – and Brits are bound to head there next year for the 100th anniversary of its founder.

There are plenty of new shows and fun attractions to get stuck into in the parks from Magic Kingdom to Epcot.

But, avid Disney fans will know there are lots of hidden secrets within the most magical place on Earth.

Walt Disney World Resort in Florida has been treasured by visitors and locals for more than 50 years now, yet the parks still hold surprises waiting to be discovered.

Disney superfan or not, there’s a long list of secrets that will add a little extra magic to your trip.

AttractionTickets.com has compiled a list of hacks and secrets for you to explore on your next visit to the magical theme parks. Find the hidden phones in the Magic Kingdom lands

Ever wanted to have a chat with your favourite Disney character? Whilst you might not be able to talk back, if you locate the old-fashioned, hand-cranked telephone inside The Chapeau on Main Street in Magic Kingdom you can listen in to a secret conversation.

Ever wondered what it would be like to meet the Beast? Well, there's no need to use your imagination, if you dine at the Be Our Guest restaurant, you can say hello to the friendliest Beast in the Disney-sphere.

Your dining experience is made even more special knowing that your favourite Disney character is just around the corner. You won’t see Belle there, but you can explore the rest of Magic Kingdom in search of the beauty.

It’s also important to book in advance as reservations at the Be Our Guest restaurant open 60 days in advance and is almost always fully booked on the day, so make sure you don’t miss out! According to rumours, all castles are designed to face south so the sun can never ruin your photo. Whether you go at golden hour or early hours of the morning, you don’t have to be a professional to get the perfect photo.

Can you find all the hidden Mickeys?

Nothing says Disney like Mickey Mouse. Create your own Disney adventure by looking for the hidden Mickeys throughout the parks. There are rumoured to be over 1000 Mickeys hidden throughout the entire Walt Disney World Resort – including in the parks and hotels. If you’re looking for a fun challenge or simply love a treasure hunt like Captain Hook, it can be a great game for you and your family to locate as many as possible.

Nobody truly knows how many hidden Mickeys there are as there is no official list and new Mickeys are added all the time as new attractions and sites are built.

Catch the animals being fed at Animal Kingdom Lodge…

This particular hack is great for animal lovers. Whether you’re staying at Disney’s Animal Kingdom Lodge, having dinner there or just visiting, you can have the incredible experience of seeing the animals being fed.

Make sure you’re there between 4 and 5 pm, this is when the animals get their evening meal and will be in the area. This time of day is great for pictures too, let's hope there's plenty of sunshine!

Pull on the rope in the Indiana Jones queue

We all know that queuing can be a bit tedious but the rides at Walt Disney World have some incredible theming and the queue is no exception so look out for interactive elements to keep you entertained.

Whilst you’re in line for the Indiana Jones Epic Stunt Spectacular at Disney’s Hollywood Studios, look out for a rope and a sign which says “Do NOT pull”.

You don’t have to worry about stopping your kids from pulling the rope or resisting temptation yourself. We encourage you to pull the rope (the sign actually has “NOT” crossed out). Don’t be frightened when you hear the voice of an archaeologist ‘stuck’ at the bottom of the well!!

Take home your own personalised fan

Every trip to Walt Disney World is memorable, but this secret means you can take a piece of the magic home with you.

At the China pavilion in Epcot, you can purchase a fan and have it personalised in Chinese for free – the perfect keepsake or gift for a loved one.

Feel like a prince or princess on your birthday! Part of the Disney magic is making you feel special when you deserve it- so let someone know that it’s your birthday.

You can pick up a birthday celebration button from the front desk and this lets everyone know that it’s your special day.

Get lots of birthday wishes as you walk through the park and plenty of freebies along the way. There are hidden animal exhibits in Animal Kingdom

If you love to explore and seek out adventure, then this secret is for you. Take yourself and your family on a self-guided animal tour.

There are many hidden animal exhibits tucked away across the park, waiting to be discovered. Say hello to the hippos, and mingle with the meerkats, there is lots to see. We recommend the Gorilla Falls Exploration Trail, located at the exit of Kilimanjaro Safaris.

Another secret queuing hack we love is the Seven Dwarfs Mine Train trick! Again, we all know that queuing can be tiresome, especially if you’ve got excitable kids with you, but this is a fun hack worth queuing for.

Watch out for the seven rotating barrels- if you’re able to get them spinning at the same time then you’ll be mesmerised as a projection of Snow White will dance across the ceiling. Can you make Snow White appear?

Can you spot the Cinderella illusion?

Some parts of Walt Disney World are seen best through the eyes of a child. Head over to the Cinderella fountain in Fantasyland and kneel down to a child’s height, and suddenly you’ll see that the crown appears right on top of Cinderella’s head!

Disney Imagineers use tricks like this all of the time to customise the parks for its guests and to make sure there is plenty to explore at the child’s sightline.

In order to get one of the best views of the fireworks you need to grab yourself a space at the hub (right in front of Cinderella’s castle), however, in order to do this, you’d need to arrive at least 60-90 minutes before the beginning of the display – this isn’t always possible and sometimes the area can be a bit crowded.

However, you can make the most of the fireworks from outside Magic Kingdom and here's where to go…

You can get amazing wide views from anywhere around Seven Seas Lagoon. If you fancy somewhere different, you can even visit the beach at Polynesian Village, California Grill at Disney’s Contemporary Resort and the boat at Wilderness Lodge, which all boast great views of the firework display. Make sure to double-check the starting time of the display as this changes from season to season. Did you know about the secret entrance?

We know you don’t want to miss a thing at Walt Disney World, but it can be difficult to squeeze everything in if you don’t have lots of time. We have a great hack to not only save you time but also the chance to avoid some crowds and see some additional Disney sights along the way.

To get from Disney’s Hollywood Studios to Epcot and avoid a time-consuming change at the Transportation and Ticket Centre, take a scenic pedestrian walkway between the two.

The path isn’t overly sign-posted so only those in the know, know it’s there. When leaving Hollywood Studios turn left and the entrance is behind the bus stop area.

It’s a 25-30 minute walk and you’ll see Disney’s Boardwalk and a few resort hotels before arriving at the International Gateway entrance to Epcot, at the back of the park. It’s less crowded and right near the World Showcase for a tasty snack and drink after your walk.

Flight of a lifetime: United sends some very deserving children to the North Pole 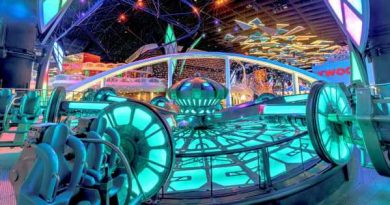