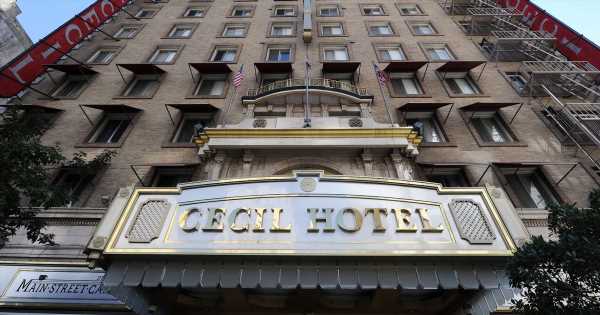 In recent years the Cecil Hotel in California has attracted curious tourists from around the world who love dark tourism.

Last year, Netflix ran a horrifying documentary about the old building that threw open its doors in the 1920s.

While it was supposed to be a luxurious Los Angeles hotspot for business travellers with opulent marble, stained glass windows and palm trees it eventually became notorious for gruesome tales.

Nowadays, it’s considered one of the most haunted hotels in the United States.

The hotel is enormous with 700 once tasteful rooms.

But, over time, it’s collected a haunting series of dark tales and troubled customers – hundreds of people have died inside its walls.

For decades the Cecil Hotel has been linked to untimely deaths and multiple suicides.

One of the most famous losses to life was focused on in the Netflix documentary – that of university student Eliza Lam in 2013.

The young woman, who had bipolar, was seen on CCTV speaking to someone who wasn’t there in the hotel’s lift.

This sparked worldwide theories that Eliza had seen or spoken to a dark spirit.

She was later found deceased in the water tank above the hotel.

Detectives had been lead to the body after guests complained of a lack of water pressure to their rooms.

Eliza's story is just one of many unsettling tales.

Suicides, overdoses and murders have occurred inside its walls adding to its perception as a haunted location.

The hotel general manager Amy Price noted: “I saw around 80 deaths over my 10 years there. There were thousands of 911 calls.”

Those found dead at the hotel include a retired telephone operator – Goldie Osgood – who was raped, stabbed and beaten in her room in 1964.

Other deaths include Helen Gurnee who leapt from her window in 1954, and Julia Moore who jumped from her eighth floor window in 1962.

Pauline Otton passed in a similar incident in 1962 – she landed on George Gianinni who also killed by the event. Richard Ramirez the notorious “night stalker” paid £9 a night to stay in the Cecil as he planned his attacks on women and children.

Historian Kim Cooper told Netlix: “[He] liked to scare, torture, rape and kill human beings. After committing some of the most brutal murders ever in South California, Ramirez would come back to the Cecil.

“He would be in the back alley, covered in blood, taking off his clothing and go up in his pants. And that would be cool, because it is that kind of place.”

Later in 1991 Jack Unterweger – an author who claimed to be a journalist – stayed for five weeks at the Cecil Hotel.

During this time he murdered three prostitutes by strangling.

Former residents claim the Cecil was “lawless” and that you avoided the top floors of the residence.

Kenneth Givens said: “Once they got a guy up there in a room they would rob him, beat him up, and throw him out the window.”

The hotel’s death-laden history has inspired a series of the TV show American Horror Story.

While YouTube, vloggers showcase themselves staying the night in the haunted building filled with fear.

The hotel has been plagued by death, drugs and crime.

Some of this has been blamed on its proximity to Skid Row – a neighbourhood in Downtown LA that is home to thousands of poverty-stricken homeless people.

Despite this, Hotel Cecil was named a historic-cultural monument by the City Council in 2017 – the year it closed down.

When the hotel was still running, people on TripAdvisor advised tourists to avoid it. One man noted: “I stayed there during rougher times in my life. There can be disturbances and you might see things you don’t want to.”

While another added: “You will […] share the same areas and elevator rides with the crackheads.

“Trust me, I stayed there and saw everything first hand. It was the best anti drug commercial i could have ever asked for.”

It will now provide affordable homes to 600 low-income people in single-occupancy rooms and small studios.

Tourists and holidaymakers can no longer book to stay in the Cecil Hotel.

Would you be happy to stay in this ghoulish building? Tell us in the comments section… 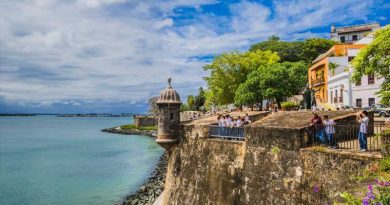 How to fly to Puerto Rico from just 9,000 miles each way

Russian tsars' former home is to reopen to tourists next summer