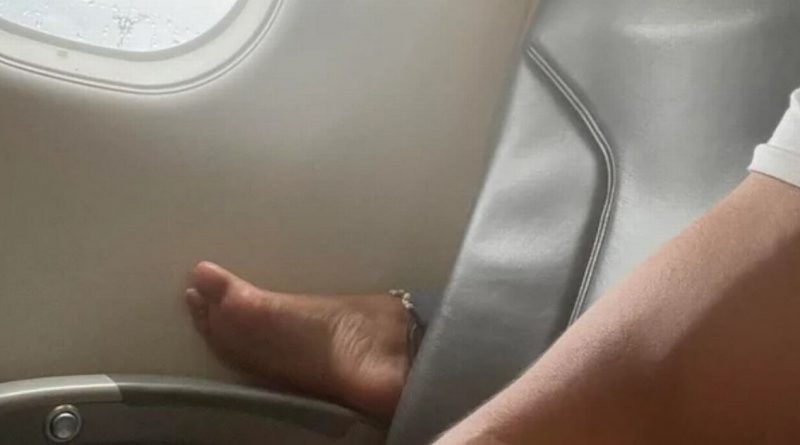 No matter what seat you choose for a flight you can't determine who will sit near you. It really is pot luck.

But it seems this one bloke pulled the short straw.

No, he didn't get placed to a natterer or behind a reclining enthusiast – the problem was with who he sat in front of.

Choosing to leave a gap by the window seat, the traveller gave himself some space by sitting in the middle chair.

However, the passenger behind saw this as a perfect opportunity to get extra comfy – and has now been labelled 'trashy'.

Controversially, they took their shoes and socks off so they could place their foot on the armrest on the window seat.

Baffled, the bloke in front snapped a picture of the stranger's toes and posted it onto Reddit.

"Does this belong here?" he asked users on the 'trashy' subreddit.

He attempted to calculate a plan to rid of the lone foot in a passive aggressive manner.

"I pointed the air con straight at it, was the only card I had", he admitted.

But, he did have another plan up his sleeve.

The Redditor added: "I had considered talking loudly about my extreme foot fetish."

Overwhelmingly, users bashed the passenger for ditching their shoes and utilising the armrest.

One person commented: "If someone ever does this to me I'm standing up and loudly asking them to please remove their foot from my armrest so everyone hears."

Another user giggled: "Suck on his toes to establish dominance."

While a third slammed: "Definitely trashy. Hope you called a flight attendant."

Someone else urged: "The other card is to call the cabin crew and tell them to get this nasty hoof back in its own space."

Meanwhile, a fifth person declared: "Take a sip of water and pretend to sneeze on it and spray some of the water on it."