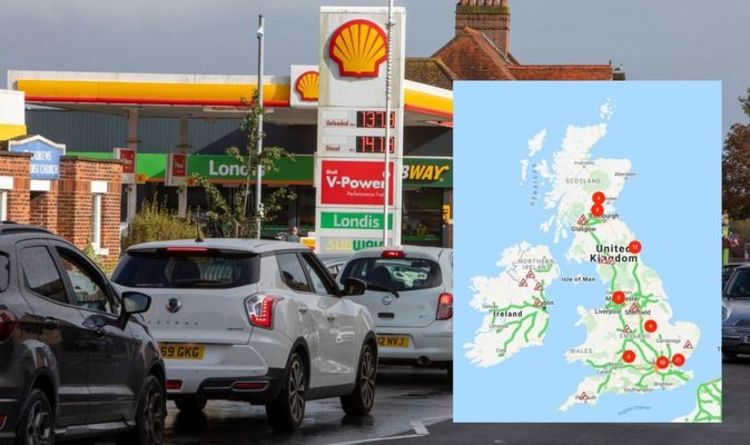 Petrol shortages are continuing to cause traffic chaos across the UK. As motorists scramble to fill up, roads have become congested with long queues forming on petrol forecourts. Express.co.uk has identified the 123 pinch points where Brits will experience long delays to their journeys.

Despite the Government sending in the military to help relieve the petrol crisis, long queues are still forming across the UK as motorists wait for limited supplies.

These queues are now clogging vital travel arteries across the UK – will your journey be affected?

The AA keeps an updated map of ongoing traffic delays and incidents.

Today it has reported 123 pinch points across the UK where congestion is causing severe delays to journeys.

In Scotland, traffic doesn’t appear to be too heavy, as just eight congestion points have been recorded.

Fuel stock levels in Scotland are now almost at their pre-pandemic levels, increasing to around 35 percent at the start of the week.

The vast majority of congestion zones are in England.

A staggering 113 congestion hotspots have emerged in the country today.

The vast majority of these are around London on the M1 and M25.

Wales has got off lightly as just two areas of congestion have been reported today.

Just like Scotland, the fuel crisis appears to be righting itself in Wales, as petrol stocks returned to around 30 percent at the start of the week.

While lucky Northern Ireland has no reported hotspots of congestion, according to the AA.

Which parts of England have the worst levels of congestion?

Outside of London, the M4 is experiencing heavy levels of congestion, particularly on the stretch of the M4 between Hermitage and Shefford Woodlands.

But it isn’t due to petrol queues, as this stretch of road has been largely closed.

Newcastle and the surrounding area is experiencing long delays, due to queues on roads.

Roads around Nottingham, Sheffield and Manchester have all reported congestion, too.

It’s important to note the AA does not say whether petrol shortages are the main cause of the traffic.

But stations on many of these busy roads continue to be short on supplies and have seen drivers queue up around them.

Why Some Planes Leave Behind Colorful Trails in the Sky