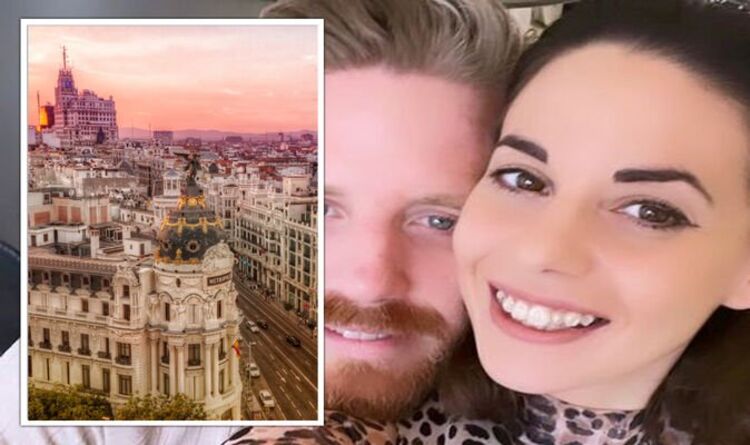 Elise Mallia, 33, and partner Jessy Jezequel, 41, had been on holiday in Marseille watching the local team play against Nice. However, an unlikely blunder on the way home saw them make a detour to Madrid.

The couple had their boarding passes scanned at the airport and boarded the Ryanair plane, thinking they were on their way back to Stansted.

However, an hour into the flight, they were shocked to hear the attendant announce they were beginning their descent to Madrid.

Elise said: “An hour into our flight, Jesse said he thought he heard a flight attendant say Madrid, but we thought he had dreamed it.

“We had our boarding passes scanned three times before boarding. We got home in the end, but we still have no idea how it happened.”

The pair had travelled to Marseille for just one night on March 20 and were due to fly home on March 21.

Elise claimed she spotted Madrid on a neighbouring gate and even made a joke about continuing the holiday there.

She said: “We must have had our boarding passes scanned about three times. Surely it must be quite hard to actually get on the wrong plane because of the security.”

The couple did make it back to Stansted, but five hours later than planned. They claimed they had been unable to get in touch with Ryanair since the incident.

A Ryanair spokesperson told Hull Daily: “Mr Jezquel and Ms Mallia boarded their flight from Marseille to London Stansted through the correct gate.

“However, these passengers then failed to follow the allocated route to the aircraft departing for London Stansted, crossed an unauthorised area and wrongly boarded a flight departing to Madrid.

“Both passengers were able to occupy the same seats they had booked for their original flight, as this flight was not fully booked, thus not alerting them to their error at the time.

“An announcement advising passengers of their final destination and estimated time of arrival is made before every flight departure – which should have alerted Mr Jezquel and Ms Mallia that they were on the wrong aircraft.

“Upon arriving at Madrid airport, these passengers then realised their error and Ryanair staff were notified of these misrouted passengers.

“Mr Jezquel and Ms Mallia were accommodated on a flight from Madrid to London Stansted later that day.

“It is each passenger’s responsibility to ensure they board the correct aircraft.”

Despite their 800 mile detour, the couple did make it back to Stansted after their rather wild trip.

Many British passengers have faced chaos at airports recently with huge queues and flight cancellations.

Both easyJet and British Airways have cancelled flights during the busy Easter holiday period.

Manchester airport has struggled with staff shortages and passengers have had to wait in lengthy queues at security.

Britons are advised to arrive at the airport in good time to make sure they can get through security and check-in before their flight.

Flybe rescue talks: What went wrong and what should ticket-holders do?