Home » Travel » The land of happiness: Why visiting Bhutan is an utter joy 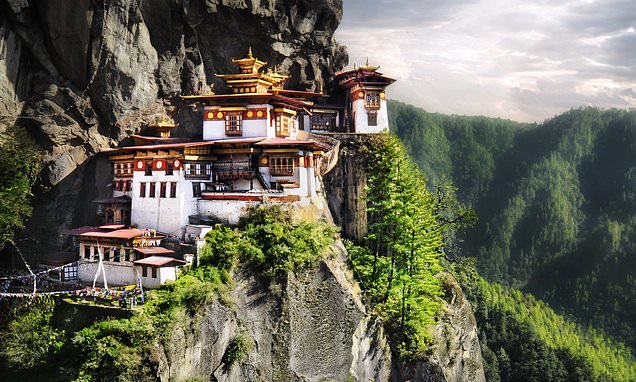 The land of happiness: The only currency that really matters in Bhutan is contentment – which makes visiting an utter joy

They hate it when you call their country Shangri-La. Deeply spiritual they may be, but the self-effacing Bhutanese are worldly enough to know the Utopian Himalayan valley of James Hilton’s 1933 book, Lost Horizon, was a romanticised fiction.

That said, the parallels are inescapable — not least Bhutan’s idealistic and deadly serious commitment to putting Gross National Happiness as its primary national goal, making materialism and economic growth secondary.

Then there’s the country’s deep seclusion. Unless you brave a boneshaking 16-hour road trip from India, the only way into this magical kingdom of 750,000 souls, less than twice the size of Wales, is by plane. 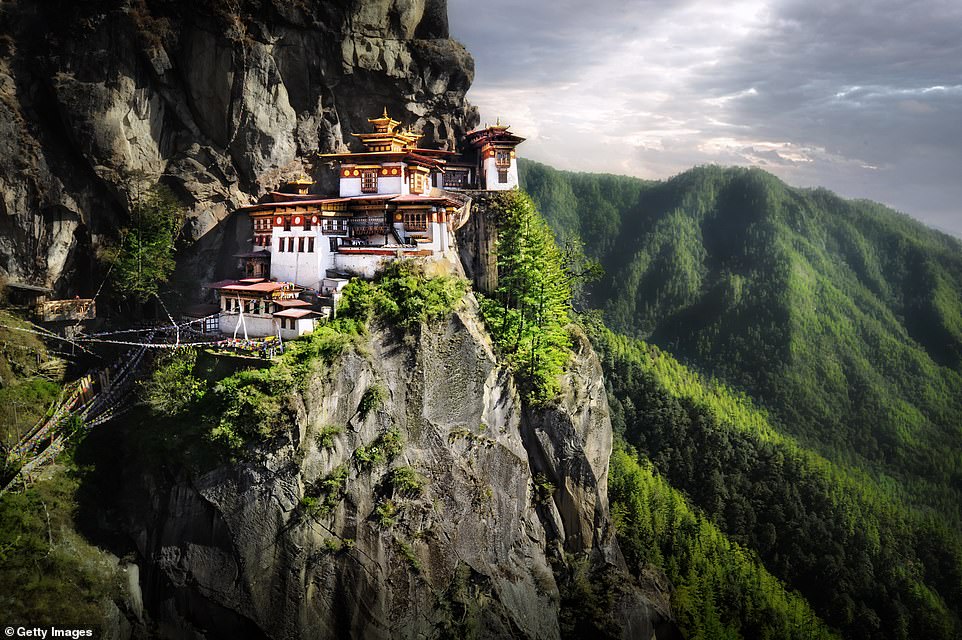 Holy ascent: On a tour of Bhutan, Ivo Dawnay climbs the steep track to the country’s famous Tiger’s Nest monastery, which sits at 10,240ft (pictured) It’s an exciting ride. As our Airbus 319 rises from India’s humid Assam plains, it climbs steeply. Then, as the snowcapped peaks of the High Himalaya emerge above the cloud line, it plunges down to duck and weave, waggling its wings through the wooded hills and valleys to land at tiny Paro airport at 7,500ft above sea level.

As soon as you arrive, it is obvious everything is different. The airport terminal building is a low-rise marriage of stone, lime plaster and elaborately carved wood — swirling with iconic Buddhist imagery. (No building taller than six storeys is allowed anywhere in the country).

Inside, there is no advertising; instead, tasteful oil paintings of the young Royal Family — handsome King Jigme Khesar Namgyel Wangchuck and attractive Queen Jetsun Pema and heir Jigme Namgyel Wangchuck — modestly attired in the national men’s gho (knee-length robe) and kira (women’s blouse and sarong) that is seen everywhere on the streets.

The wooden immigration booths have the homely feel of an English country pub. You are greeted with smiles.

And outside in the town, there are no hassling beggars, no litter and no other foreign tourists — a stark contrast to near neighbour, Nepal, whose inundation by hordes of backpackers is something Bhutan is determined to avoid.

A minor hubbub reveals the arrival of a bald and bespectacled senior abbot in his flowing, deep red robes — a Bodhisattva no less, one who has chosen to hold back from full enlightenment to help others on to the Buddha’s True Path. Ivo arrives in Bhutan via Airbus 319, his plane landing at tiny Paro airport (pictured) at 7,500ft above sea level

This is a special day. After two-and-a-half years of rigid lockdown, our arrival marks the official re-opening of the tiny Himalayan Kingdom to the world,

The motive for our party’s visit is the inauguration of a 250-mile walking route that traces paths East-West across the country.

The Trans-Bhutan Trail is the brainchild of Sam Blyth, a Canadian entrepreneur and philanthropist.

It was enthusiastically taken up by the 42-year-old King, who used the Covid pause to mobilise the nation to rebuild the 16th-century walking route taken by travellers, traders, pilgrims, official messengers and civil servants for generations. 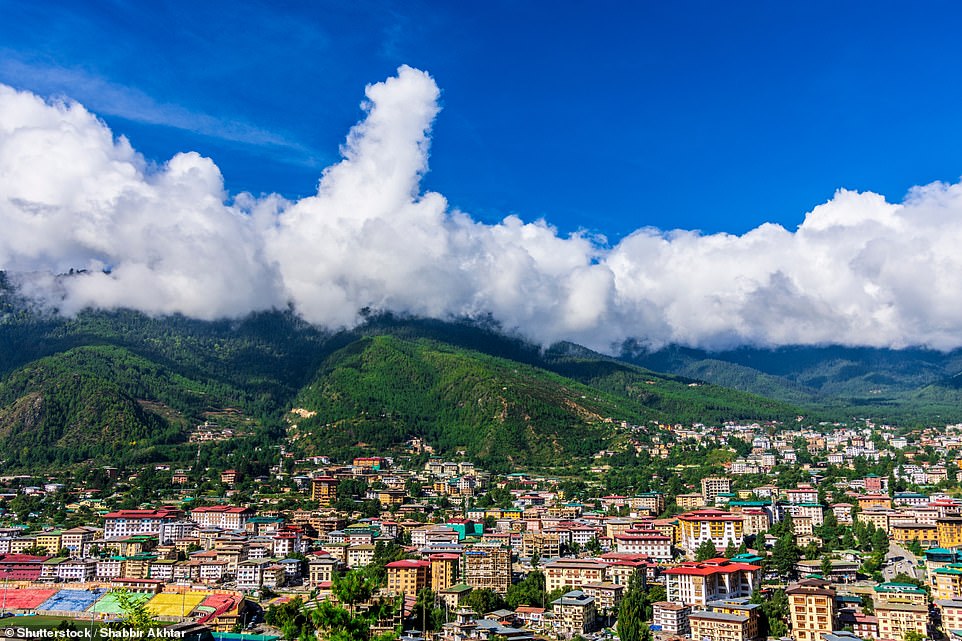 Ivo’s visit coincides with the inauguration of the Trans-Bhutan Trail, a 250-mile route that traces paths East-West in Bhutan. Before he sets off on the route, he enjoys a night ‘of deep luxury’ in the capital, Thimphu (above) Golden days: Pictured above is The Great Buddha Dordenma near Thimphu

The restoration project engaged hundreds of young volunteers — known as the Guardians of the Peace. They researched the original route’s stories and oral history; rebuilt 18 bridges and hacked 10,000 steps out of the dense forest.

It is hoped that this new resource will rival Spain’s Camino de Santiago, Peru’s Inca Trail and the Appalachian trail in the U.S. After a night of deep luxury in the capital, Thimphu, at the exquisitely appointed Amankora hotel, we are off with our guide, Sanjay, and driver, Umba, to explore the trail.

Everywhere on the roadside are reminders of Bhutan’s Vajrayana Buddhist traditions — a variant of Tibetan practice that also embraces local animistic deities and demons, spirits of the hills and streams in the landscape.

We set off past white chortens (shrines) down a steep, wooded track, dotted with large, black butterflies that have an electric yellow spot on their wings.

And, as we descend to a mountain stream, the first bells of a giant prayer wheel, turned by water, can be heard ringing through the canopy.

With its chir and blue pines, magnolias and rhododendrons and its villages of steeply pitched roofs and intricately painted houses, the landscape at first recalls Alpine woodland. However, the flora and fauna swiftly puts one right.

The birdlife alone — scarlet minivets, laughingthrushes and scaly-breasted munias — abound along with garishly coloured Himalayan pheasants and ever comical hoopoes, uncurling their Mohican hairstyles like King’s Road punks in the 1970s.

Sanjay points out golden and grey langur monkeys, while deeper within the woods are sambar and muntjac deer, yellow-throated martens, red pandas, serow goats and wild pigs. There are rumours — but only rumours — of bears and tigers.

Just 24 hours in, it begins to dawn on one that this is an experience unlike any other in a lifetime of travelling: a glimpse into a unique society all but untouched by Western individualism, wealth and ambition. On our second day, we enter the exquisite Punakha Valley — the former Royal capital is just like a film set image of lime-green rice paddies — bisected by the mighty Mo Chhu river and guarded by its fine 17th-century Dzong, a formidable fortress/temple where monks guard holy relics.

Nearby, in riverside parks, locals hone their archery skills — the national sport — hitting targets the size of dartboards from 140 yards.

The bulk of Bhutan is temperate and sometimes even sub-tropical, hosting more undisturbed bird and animal species than the whole of North America and Mexico. On his hike, Ivo enters the ‘exquisite’ Punakha Valley (pictured) and finds that it’s ‘just like a film set image of lime-green rice paddies — bisected by the mighty Mo Chhu river’

After a steep climb in our minibus, we spend time in Lingmukha, a small farming village high above the valley. It is here that the social purpose of the trail is revealed.

‘I used to have 27 horses to take people across the valley, but they all went when the road came in,’ an elderly man says. ‘We hope that the trail will bring some work back.’

A young couple have chosen to remain, excited about setting up a homestay hostel for travellers. Tradition: The Punakha Valley is guarded by its fine 17th-century Dzong (pictured), a formidable fortress/temple where monks guard holy relics

But for most villagers, back-breaking work will continue as before — tending the shrinking rice paddies. For Bhutan no longer grows enough of its famous red rice to feed itself.

The wealth of the country derives mostly from the sale of hydroelectric power to its neighbours.

Our final day is spent off the trail, climbing the steep track to the Tiger’s Nest — Bhutan’s most famous monastery that clings to the rockface of a mountain.

I am the slowest of our party, but our faithful driver Umba keeps me company. Ivo encounters ‘reminders’ of Bhutan’s Vajrayana Buddhist traditions ‘everywhere’ on his hike. Above are young monks at the country’s Karchu Dratshang monastery

Ivo was a guest at Amankora Lodges which offers a package of activities for a four-day visit at £1,330 per room per night. Other travel firms offer Bhutan tours which must be accompanied by a guide and driver. Find more information at Transbhutantrail.bt. There are no direct flights from Britain to Bhutan. Druk Air flies into the country from Asian and Indian destinations and Bhutan Airlines flies from Bangkok, Kathmandu, and Kolkata.

At the monastery at last, we find dozens of burgundy-robed, shaven-headed lamas and their boy apprentices, absorbed by the annual recitation of sacred texts.

A drone of chanted mantras seeps from the temples like the whirr of a machine — calling compassion down on the sinful world.

That evening in a final farewell, Lotay Tshering, Bhutan’s charismatic prime minister, takes questions. Sanjay has primed me to challenge the scale of the $200-dollars-a-night (£176) tourist tax as he fears it will limit the benefits to rural communities.

Tshering admits the figure might be reviewed later, but for now the priority is to defend both local culture and the natural environment. ‘We are culturally very, very sensitive,’ he says, insisting that tourism is not seen as a revenue generator but as a resource to defend the country’s values.

One fears, Bhutan’s four guiding National Happiness principles of good governance, sustainable development, and cultural and environmental conservation will be eroded by the modern world.

On the other hand, the country’s legal code as far back as 1729 stated: ‘If it cannot create happiness for its people, there is no purpose in a government to exist.’

For an old Western materialist like me, to witness not just Bhutan’s physical beauty but also its David versus Goliath struggle to be itself is a privilege I will never forget.

This Long-overlooked California Region Has Offbeat Hotels, Stunning Beaches and Hiking Trails, and Some of the Best Wines in the West

Why You Should Never Throw Out an Expired Passport