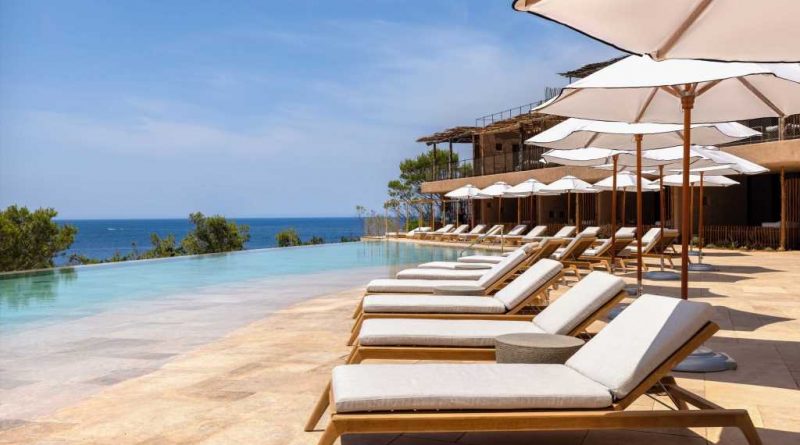 Travelers to Spain and Portugal–whether they’re visiting for the first time or have been before–have a lineup of new and upscale properties to pick from when it comes to hanging their hat. More than a dozen hotels in the two countries have recently opened or are debuting in the coming months, according to Virginia Irurita, the founder of Made for Spain and Portugal, a luxury travel company based in Madrid.

“Despite the lockdown over the last year, it’s been busy on the hotel front in terms of development,” she says. “It’s a scene that brings together international high-end brands with locally owned properties that are luxurious in their own way.”

One of the buzziest openings, hands down, is Six Senses Ibiza. The 116-room resort is set on a 20-acre site in Cala Xarraca Bay on the island’s northern tip and began welcoming guests in early July. It offers a variety of accommodations, from suites built into coastal cliffs to standalone residences available to rent or own.

Comprising three buildings, the project was seven years in the making, says Jonathan Leitersdorf, owner, developer, and architect. “We wanted to create a property that looked like it was always there architecturally and has a primitive feel,” he says. “You’ll find deep façades with shaded pergolas and wild trees, but you won’t find shiny glass because it’s too contemporary.”

Leitersdorf adds that the appeal of Six Senses Ibiza unfolds slowly as guests discover the collection of spaces. They include a recording studio, cinema, open-air stage, farmers market, and three organic restaurants by the celebrated Israeli chef Eyal Shani. There’s also a spa with 200 local practitioners and year-round programming such as full-moon dinners in the summer and wellness retreats in the winter.

Moving over to Spain’s mainland, Madrid, that has long lacked luxury hotels, has three new contenders. All of them are international brands.

The first, Four Seasons Hotel and Private Residences Madrid, debuted last September. Located in the heart of the city near Barrio de las Letras and the Prado Museum, the property has a rooftop restaurant and bar, Dani, from Michelin-starred chef Dani García, and a 15,000-square-foot spa.

In April 2021, the Mandarin Oriental Hotel Group reopened the iconic Mandarin Oriental Ritz, Madrid following an extensive renovation of the 110-year-old property. The Spanish architect Rafael de La-Hoz was responsible for the historical restoration, while French designers Gilles & Boissier led the interior decor. The property has five dining venues overseen by the three-Michelin-starred Spanish chef Quique Dacosta, a swimming pool, and a spa.

Lastly, this fall, Villa Magna will reopen as a Rosewood following an extensive renovation. The celebrated Spanish architect Ramón de Arana is remodeling the hotel’s exteriors, and the Australian firm Bar Studio is overseeing the interior design. On the culinary front, Michelin-starred chef Jesús Sánchez will head the signature restaurant, Amos.

In Galicia, located on the northern coast of Spain, there’s Noa Boutique Hotel, a 32-room property that prioritizes sustainability and gastronomy–the upscale restaurant serves seafood and rice dishes using local ingredients. Made for Spain and Portugal’s Irurita loves the rooftop terrace, which has a swimming pool. “Come here at sunset for a pre-dinner glass of wine,” she says. “The views are divine.”

Portugal has three properties worth talking about, according to Irurita.

About 90 minutes east of Lisbon, Evora Farm Hotel & Spa opened in early July. Located in the Alentejo region, the property is set on almost 30 acres of land and has a minimalist decor that includes light tones and natural woods. Guests can enjoy the spa, educational farm, and vegetable garden. They can also partake in activities in the Portuguese countryside such as horseback riding, bird-watching, and stargazing.

The Ivens hotel is located right in the center of Lisbon and is named after the Portuguese explorer Roberto Ivens. The property has a distinctly sophisticated vibe and features muted tones with pops of color.

Also, Four Seasons Ritz Lisbon, the grand dame of luxury properties in the city, just unveiled a renovation that includes upgraded technology and an outdoor swimming pool and bar.

Let’s all make a toast to these renovations and include the other new properties in Portugal and Spain that are definitely a reason to get excited about planning a trip.