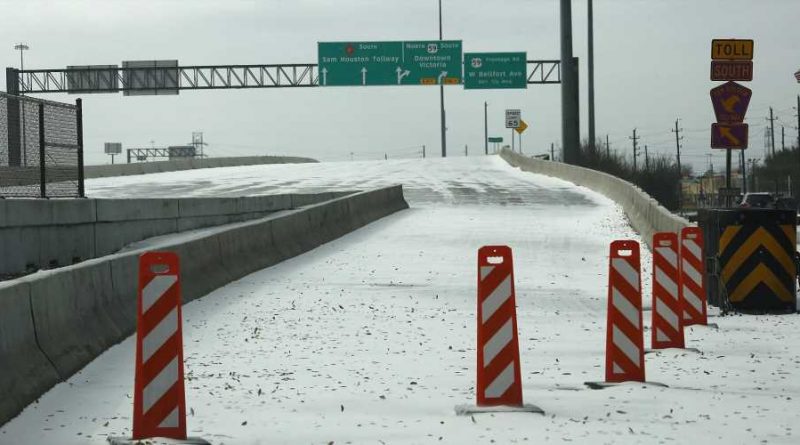 Thousands of flights were canceled and airports shuttered as a winter storm blasted the South and Midwest, complete major snowfall, a deadly tornado, and widespread power outage across the country.

George Bush Intercontinental Airport, in Houston, announced on Twitter that it will remain closed until at least the late afternoon on Tuesday, more than a day after ice had begun accumulating on the runways. Nearby William P. Hobby Airport also remained closed on Tuesday, the airport confirmed in a tweet.

In total, more than 3,200 flights were canceled across the country on Monday from Texas to Chicago, with more than 1,100 cancelled on Tuesday, according to FlightAware.

In addition to flight issues, more than 3.5 million customers lost power in Texas, CNN reported, with outages stretching as far as Oregon, Louisiana, Virginia, and Mississippi. A storm-fueled tornado also touched down in North Carolina late Monday, killing at least three people and injuring 10, according to USA Today.

The storm, dubbed Uri, dumped tons of snow across the country, including 11.1 inches on Seattle and four inches at the Dallas-Fort Worth International Airport — the airport's heaviest snowfall since 2010, The Weather Channel reported.

A large swath of the country was expected to reach record cold temperatures, according to The National Weather Service, "with the bulk of them occurring in the South Central U.S. where daily anomalies range between 35 to 45 degrees below normal."

The weather has also forced several states to postpone vaccine appointments, while Harris County in Texas had to quickly salvage more than 8,400 doses after the health department's back-up generator failed at about 2 a.m. on Monday, according to CNN. The doses were distributed to hospitals, Rice University, and the Harris County Jail.

"I'm not going to sugarcoat it. The next few days are going to be very tough to those who have lost power," Harris County Judge Lina Hidalgo said, according to the network. "As much as we wish it weren't so, things will likely get worse before they get better."

Hidalgo said there was a "high chance" power outages could last for days.

While Uri is moving on, Americans across the country shouldn't expect a break. A second storm, named Viola, was expected to wallop parts of the country this week, The Weather Channel reported, with winter weather advisories issued for parts of New Mexico, Texas, and Oklahoma, and into the lower and mid-Mississippi valleys.

Snow is predicted to spread from the southern Rockies into western parts of Oklahoma and Texas, with freezing rain and sleet threatening central and eastern Texas. On Wednesday, the storm is expected to move north into parts of Arkansas, Missouri, western Tennessee, and the Ohio Valley, before making its way to the Northeast on Thursday.

Miniature abodes crop up on the Isle of Man, with residents mystified

Should I book my 2021 holiday now and are there good deals?