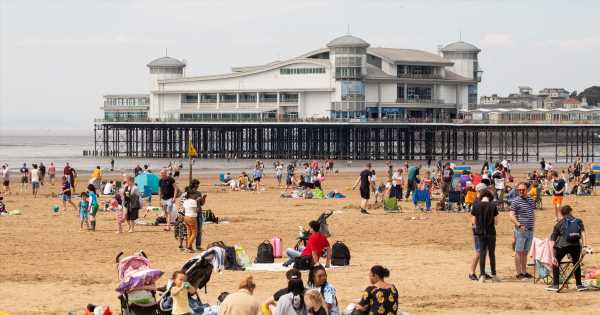 A fuming holidaymaker has criticised Weston-super-Mare – a popular seaside town in North Somerset.

They claim they’re desperate to fly off to Crete, in Greece, for “half the price” instead.

Thousands of Brits have grown used to staycations around the nation over the last few years as the pandemic sent the travel industry into shut down.

But, it seems one tourist wasn’t pleased with their trip to the beach town.

They took to TripAdvisor to slam the town, reports BristolLive.

In the furious review they stated: "Well where to start! We travelled here on what was billed as the hottest two days of the year so far, 16/6 and 17/6, billed as sunny blue skies and 29C.

"The sea at best resembles a sepsis, dark brown slurry of mud – hardly what we were expecting as The English Riviera. "

They continued: “Hotels, old, long past their days charging extortionate prices, kiss me quick hats and overpriced fish and chips.

"By 17.50 on our first day the kids were cold as the sky had clouded over, the wind biting if not in a sheltered area.

“Filth everywhere, unemptied bins and so we left never to return – Crete here we come for half the price!"

Meanwhile, another displeased tourist wrote: “First and last visit. We will not come back again. Muddy place, little bugs everywhere…"

Weston-super-Mare is well known for its mud-flats and brownish seawater, but while they may not be a tropical dream the area is fantastic for wildlife and the environment.

Up to 10 million tonnes of silt are churned up and carried along in suspension by tidal currents running at seven metres per second, reports SomersetLive.

And, it’s one of the largest wildlife habitats in Europe with high densities of invertebrates which are vital for a wide range of fish and bird species.

The salt marshes and mud flats are used by around 74,000 birds each winter and the waters support over 100 species of fish.

So, it may not always be beautiful, but the brown waters help to sustain British wildlife.

Various other visitors to the seaside down have enjoyed their stay – so it’s not all bad!

One poster wrote on TripAdvisor: “The beach is really beautiful, so much sand and so clean. There are lots of places to eat and drink and lots of parking too, definitely worth a visit."

Flying to Saint Helena, in remote South Atlantic, now easier from US