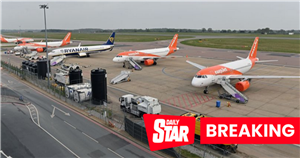 Flights have been cancelled at Luton Airport after record UK temperatures caused a 'surface defect' in the runway.

After the fault was identified, engineers closed the runway and got to work fixing the problem as the celsius rose across the country.

It is not currently known when the problem will be fixed.

However temperatures in Luton have reached 36C today causing chaos on the runway.

Flights that are inbound to the airport are not being diverted as repairs are being carried out.

The last flight to take off was believed to have been at 3.07pm. The airport only has one runway.

One furious passenger tweeted: "How long will this take?!?!?"

Another wrote: "They have just closed the runway at Luton airport for at least an hour. We were just about to be pushed back and they stopped everything. Inbound flights are being diverted.”

Commenting on the disruption, Luton Airport said: "Following today's high temperatures, a surface defect was identified on the runway.

"Engineers were called immediately to site and repair works are currently in progress to resume operations as soon as possible.

"We would like to apologise for the inconvenience caused."

The widespread disruption comes as the UK has been smothered by a heatwave today with some areas even braced for temperatures as high as 42C.

The heat has paralysed the UK's transport network with London Underground services encouraging passengers not to travel.

Meanwhile, in Bexleyheath, four fire engines and around 25 firefighters were called to a grass fire the size of three football pitches which was thought to have been sparked by the baking weather.

U.S. Cruises Can Resume in Mid-July—if Most Onboard Are Vaccinated