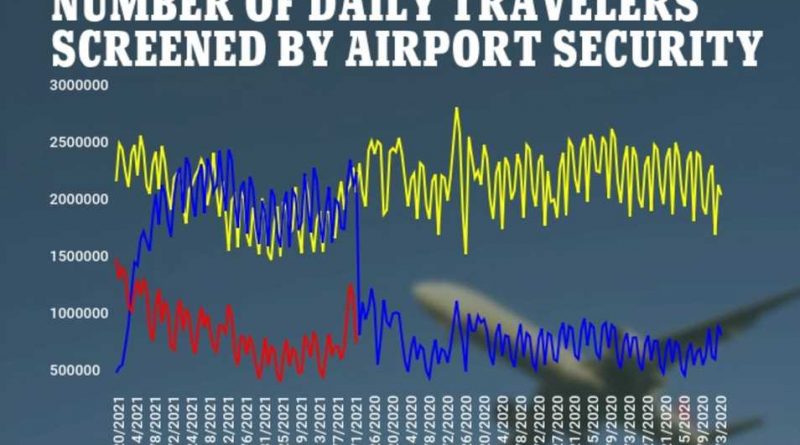 More than 1.5 million people streamed through US airport security checkpoints on Sunday, the largest number in more than a year when the pandemic first brought the travel industry to a crashing halt.

The Transportation Security Administration (TSA) said Monday it screened about 1.54 million people Sunday, which appeared to be the largest number since March 13 2020.

This marked the 11th straight day that numbers topped more than one million, as a growing number of people are taking to the skies after becoming vaccinated against COVID-19 or being drawn by the lure of spring break season.

While this comes as welcome news for the airline industry which was one of the hardest hit over the last year, the trend flies in the face of guidance issued by the nation’s top health experts.

The CDC has warned that a surge in travel could kick off another wave of the virus – a worrying trend that was witnessed first after Thanksgiving and, second, after Christmas.

TSA data shows more than triple the number of people passed through airport security Sunday than the comparable Sunday one year ago when just 454,516 people traveled.

The seven-day rolling average of screenings has also doubled since February 1.

This comes after the US hit a key milestone Wednesday when it marked the first day this year when there were more travelers than the same time last year.

From Wednesday onward, the number of travelers passing through US airport security has risen every single day.

By contrast, the number of travelers continued to decline daily from the same day last year.

On 13 March 2020, the US banned foreign travelers from most of Europe before extending the ban the next day to include the UK and Ireland.

At the time, much of the world was also introducing travel bans too and holidaymakers and visitors abroad were flocking back to their home countries to beat the restrictions coming into place.

In the months that followed, airlines cut thousands of flights and thousands of staff were laid off or furloughed as borders stayed closed and stay-at-home orders and fears of the virus dissuaded travelers and left planes sitting empty on runways.

Now, one year on, US borders remain shuttered to international travelers from many countries including much of Europe but Americans have resumed domestic travel within the US.

The US has seen several other surges in travel in recent months but not on the scale being seen now.

In the lead-up to the Thanksgiving holiday, the biggest travel day of November 22 saw 1.05 million passengers pass through airport security.

And, in the lead-up to Christmas, the busiest day was December 23 when 1.19 million traveled, followed by 1.28 million on December 27 as many returned from the holiday or jetted off for New Year’s Eve celebrations.

But these figures are still shy of the current levels, as spring breakers flock to and from the beaches and bars of popular destinations such as Florida.

Airline executives also say they have seen an increase in bookings during the last few weeks after US airline passengers were down 60 percent in 2020.

However passenger traffic still remains far below 2019 levels before COVID-19 started ravaging the world, with the 1.5 million travelers Sunday still only about a quarter of the number on the closest Sunday that year.

Trade group Airlines for America said passenger demand is still down 47 percent compared to pre-pandemic levels, while international travel demand is down 68 percent.

The group is calling on the federal government to issue vaccine passports, in a bid to help the industry get back on its feet.

But the Biden administration’s stance is that people should still avoid non-essential travel until the population is vaccinated against COVID-19.

CDC Director Dr Rochelle Walensky said during a White House briefing Monday that fully vaccinated people should avoid ‘non-essential travel’ amid concerns that spring break travel will lead to an surge in infections.

‘Every time there’s a surge in travel, we have a surge in cases in this country,’ Walensky said.

She warned that many variants of COVID-19 now spreading in the US started in other countries.

‘We remain in the midst of a serious pandemic and still over 90 per cent of our population is not fully vaccinated, though we are working hard to get there,’ Walensky said.

‘Therefore, everyone, whether vaccinated or not, should continue to avoid medium and large-sized gatherings as well as non-essential travel,’ she said.

Meanwhile, officials in spring break destinations are also voicing concerns of a travel-related surge in the virus.

Miami Beach officials have implemented a curfew and declared a state of emergency amid fears that the influx of partygoers – in a state with no mask mandate – will lead to a surge in infections.

Mayor Dan Gelber told an emergency meeting of the city commission last week that all manner of out-of-town and out-of-state visitors, not just college students, were filling the streets since Governor Ron DeSantis on February 26 called the state an ‘oasis of freedom’ from coronavirus restrictions.

Walensky said the CDC is not yet issuing new guidance for vaccinated Americans because it doesn’t want to prompt further travel.

Nationwide, 24.5 percent of Americans have had at least one shot while 13.3 percent are fully vaccinated with around 2.5 million people being vaccinated every day.

Three vaccines have so far been approved in the US – the Moderna and Pfizer which both involve two separate doses, and the Johnson & Johnson one-shot vaccine.

Joe Biden has said that all adult Americans should be eligible to get the vaccine by May 1 based on the three approved vaccines while a fourth – AstraZeneca – would help scale up the rollout.

But the approval process is slowing things down with AstraZeneca saying Monday it will file for Food and Drug Administration (FDA) authorization of its COVID-19 vaccine in the first half of April.

The Trump administration made a deal with AstraZeneca for 300 million doses of AstraZeneca’s vaccine last year, and the federal government is currently sitting on nearly 30 million which can’t be used until the shot is authorized by the FDA.

Nearly four million of those doses were sent to Mexico and Canada which have both already authorized the shot, since they are useless to Americans for the time being.

The vaccine rollout has become a race against time to both meet the new administration’s target and get the population inoculated to prevent another wave. 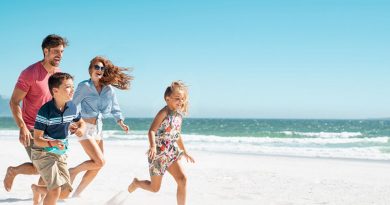