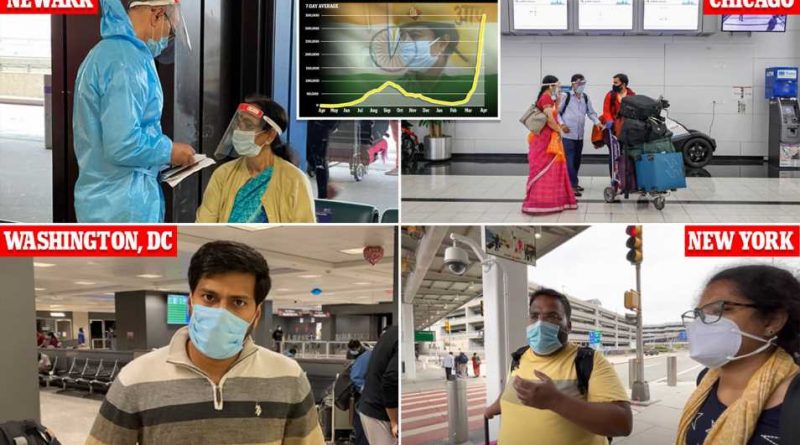 The US government has still not ordered travel restrictions for India even as the country’s COVID-19 crisis deepens – despite there still being bans in place on the UK, South Africa, Brazil and a number of European countries.

The State Department issued a Level 4 travel advisory on Wednesday, which is the highest alert of its kind, urging all Americans to leave India if they can because of the current COVID-19 outbreak there.

The alert also advises Americans not to travel to India as the country experiences a catastrophic second wave that is, in part, fueled by a deadly Indian variant known as B.1.617.

But the US government has so far not issued any travel bans that restrict non-US citizens from coming from India to the United States.

The CDC and State Department did not respond to a request from DailyMail.com about whether any travel restrictions would be placed on India.

The Indian COVID-19 variant, which has now separated into three distinct virus types, has already been detected in the US with reports of cases in California and Tennessee.

Back in January, President Joe Biden added South Africa to a list of countries the US is restricting travel from after a COVID-19 variant started spreading rapidly there and was detected in various states.

The US, to date, has not banned flights from countries amid the COVID-19 pandemic but has restricted travel for non-citizens from some where the virus, or its variants, were spreading.

The ban prohibits foreigners who have been in a restricted country in the 14 days prior from coming to the US. The restrictions do not apply to American citizens returning to the US.

Other countries on the restricted list include the UK, Brazil, Ireland, China and 26 European countries that are part of the border-free Schengen zone.

A number of countries, including the UK, Canada, Australia, New Zealand and Dubai, have all canceled flights from India amid the current outbreak there.

It is not clear if the US plans to cancel flights from India.

There are currently 14 direct flights between India and the US per day.

The CDC issued updated guidance last week that put India on a list of about 100 countries that it recommends Americans should avoid traveling to.

The State Department put out its Level 4 travel advisory on Wednesday, urging all Americans in India to leave as soon as possible.

Passengers flying back into the US from India on Thursday and Friday told DailyMail.com that the majority of their flights were full.

Those on direct flights from India were spotted arriving in Washington DC, New York and Chicago.

‘Flights were completely full because we came from India. Many flights were canceled,’ one traveler, who lives in the US, said.

WHAT DO WE KNOW ABOUT THE INDIA VARIANT?

When and where was it discovered?

The variant was first reported by the Indian government in February 2021. But the first cases appear to date back to October 2020.

What mutations does it have?

It has 13 mutations that separate it from the original virus that emerged in China — but the two main ones are named E484Q and L452R.

Scientists suspect these two alterations can help it to transmit faster and to get past immune cells made in response to older variants.

Is it more infectious?

The L452R mutation is also found on the Californian variant (B.1.429), even though the two evolved independently. It is thought to make the American strain 20 per cent more infectious.

The E484Q mutation is very similar to the one found in the South African and Brazil variants known as E484K, which can help the virus evade antibodies.

The South African variant is thought to make vaccines about 30 per cent less effective at stopping infections, but it’s not clear what effect it has on severe illness.

‘India is getting worse day by day. Luckily we came here before the flights are banned.’

Another passenger, who also lives in the US but was visiting family in India, said: ‘The airline tickets are skyrocketing. We were trying to get tickets for two hours.’

It came after a warning posted on the US Embassy in India website said some Americans had reported they were being turned away from hospitals in some cities because they are overrun.

‘New cases and deaths from COVID-19 have risen sharply throughout India to record levels. COVID-19 testing infrastructure is reportedly constrained in many locations,’ the warning said.

‘Hospitals are reporting shortages of supplies, oxygen, and beds for both COVID-19 and non-COVID-19 related patients. US citizens are reporting being denied admittance to hospitals in some cities due to a lack of space.

‘Some states have enacted curfews and other restrictions that limit movement and the operation of non-essential businesses.’

According to CDC guidelines, any person flying into the US from another country, including citizens and fully vaccinated people, must provide proof of a negative COVID-19 test result no more than three days before travel.

Upon arrival in the US, CDC guidance says unvaccinated people should quarantine for 10 days. They can cut that quarantine time to seven days if they test negative for COVID three to five days after arriving.

Vaccinated travelers should get tested three to five days after travel and monitor their symptoms, according to the CDC.

The situation in India is becoming more dire with the country recording the world’s sharpest spike in COVID infections this month that has seen cities run out of hospital beds, oxygen and medicines.

Second only to the US in total infections, India has reported more than 300,000 new cases daily for nine days in a row, hitting another global record of 386,452 on Friday.

Total deaths have surpassed 200,000 and cases are nearing 19 million – nearly 8 million since February alone as virulent new strains have combined with “super-spreader” events such as political rallies and religious festivals.

Medical experts say real numbers may be five to 10 times higher than the official tally.

Scientists are studying what led to an unexpected surge and particularly whether the variant is to blame. The variant has been reported in some 18 countries, raising global concern.

Prominent US disease modeller Chris Murray, from the University of Washington, told Reuters that the sheer magnitude of infections in India in a short period of time suggests an ‘escape variant’ may be overpowering any prior immunity from natural infections in those populations.

Gravediggers in India are working around the clock to bury victims and hundreds more are being cremated in makeshift pyres in parks and parking lots.

The US started sending supplies worth more than $100 million on Thursday, including 1,000 oxygen cylinders, 15 million N95 masks and 1 million rapid diagnostic tests.

The US also has redirected its own order of AstraZeneca manufacturing supplies to India, to allow it to make more than 20 million doses, the White House said.

After nearly a decade, United is giving its planes a makeover. Here's the new look.

How to prepare for a post-lockdown break