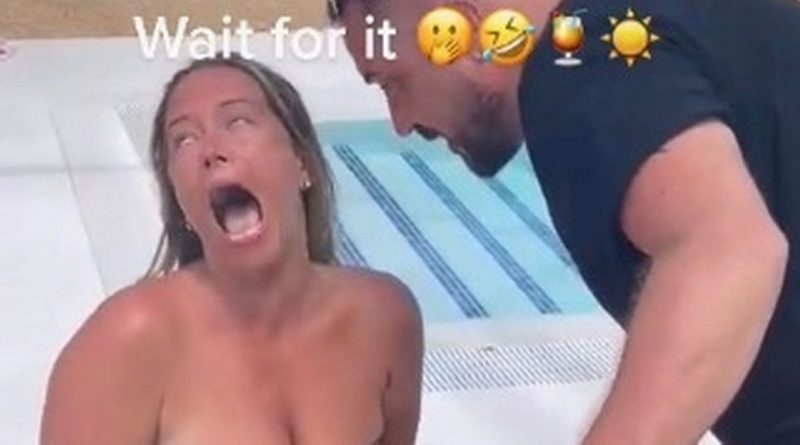 An embarrassing video shows the moment a woman literally wet herself with laughter when her drunk friend was recorded falling on top of a sunbathing stranger at the hotel pool.

In the hysterical clip, which has gained more than 34,000 likes on TikTok by @ashleyrose622, a very intoxicated man is seen whispering into the ear of a large-breasted woman wearing a strapless swimsuit.

He appears to tell his pals that he's "not going out if she's not going out" before muttering something inaudible to her as she starts dancing and smiling.

READ MORE: Southwest Airlines flight attendant annoys passengers by singing over the tannoy at 6am

She then shouts "penetration for the nation" which prompts him to move away, laughing.

But the lad, who was wearing a black shirt and red Gym King shorts, very quickly loses his balance and ends off staggering for a few paces before collapsing into an occupied sunlounger where a woman was sunbathing.

His mates were howling over the incident as the man was heard apologising to the woman he landed on. One of his cackling pals said: "I can't cope."

But it seems the woman in the strapless swimsuit found it a little too funny as the camera showed drips of urine coming out from under her sun lounger, as she said: "I've done a little wee."

It would appear they weren't the only ones creasing at the blunder as TikTok users swarmed the comment section poking fun at the incident.

One user said: "Man started falling in Spain and ended up in Portugal."

Another quipped: "I'm impressed although a little disappointed you missed the pool on your journey."

For the latest breaking news and stories from across the globe from the Daily Star, sign up for our newsletter by clicking here.

A third added: "This has absolutely tickled me, can't see for tears."

However, not everyone found the situation funny as some people said it is behaviour like that that is causing Spain to crack down on binge drinking in tourist hotspots.

One user wrote: "Is this why they are cracking down on inclusive drinks?"

Another added: "How is she just sitting there p*ssing? Literally."

16 places around the world locals don't want you to visit

Travel chaos as flights cancelled at Heathrow, Gatwick, Stansted & Luton due to heatwave