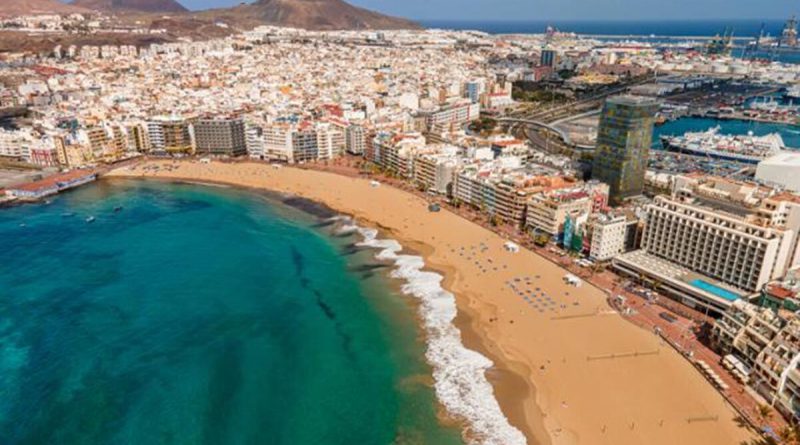 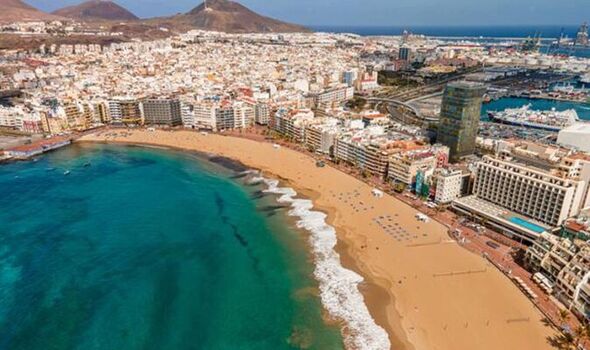 A few days after sailing from Southampton, with an overnight stop in Bilbao on the way, we were picking out our sun-loungers on the delightful Playa de Las Canteras.

This beach in Gran Canaria’s capital Las Palmas is regularly listed as one of the world’s best. It has a huge expanse of dark golden sand lapped by gentle waves, kept that way by a rocky barrier that takes the sting out of the powerful Atlantic breakers.

And to feel that sun on our pasty staycation skin was so good. At Las Canteras, two sunbeds and an umbrella are yours for about €9 a day and the buzzing promenade – packed with bars, restaurants and cafes – seals the deal. It’s all a 15-minute stroll from the ship.

But the beach wasn’t really what we were there to see. The cruise was called Landscapes of the Canaries, and never having been there before, I had no idea quite what a vast choice of landscapes the Canaries have to offer.

Thousands of Britons holiday there every year, attracted by a winning combination of winter sun and lovely beaches.

But behind the coastal resorts of these volcanic islands is an almost untouched rugged beauty… soaring mountains surrounded by lush forests, ancient lava fields, cliffs and ravines with views so dramatic they make you blink. And every island is different.

Our next port of call was Tenerife where we couldn’t pass up the ­opportunity to visit Mount Teide, an active volcano that, if measured from sea level, is the third tallest in the world.

The climb through the winding roads of the Teide National Park is packed with views so giddying they have you checking your seatbelt every five minutes. Halfway up we stopped to watch paragliders leap off the top of a cliff and float down to the bottom of a steep green valley.

Minutes later we were in the middle of a vast rocky moonscape, ­unsurprisingly chosen by the European Space Agency as the perfect terrain to test its planetary rovers.

Passing the famous Teide Observatory (Brian May’s a fan) we arrived at the cable car station for the eight-minute ride to the top station at 11,663ft. From the viewing platforms, you can see neighbouring islands. 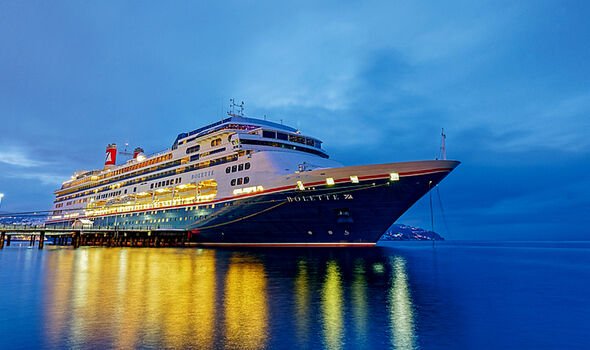 Looking inland, there are impressive views of Las Canadas Caldera, a huge hole thought to be caused by the collapse of an even bigger volcano after an eruption many centuries ago.

The third island was little La Palma which had been making headlines for two months when we arrived. One quiet Sunday in September, its Cumbre Vieja volcano exploded into life, spewing lava and molten rock for miles around, forcing locals to flee. Around 2,000 families were made homeless. Thankfully no one died.

When we arrived in December, there was no fire and little smoke, although the eruption had not yet been declared over. But as we stood in a plaza in the town of El Paso and looked north, the devastation was everywhere, with cooling lava covering houses, roads and farms.

We had goggles and masks against the black dust hanging heavy in the air. But the locals were still living with it… piles of ash on pavements, clogging the gutters, clinging to garden plants and any surviving farmland.

That evening, we sailed past the volcano and saw where the lava flow had met the sea, a few streaks of luminous red molten rock flickering in the twilight, a glowing reminder of the awesome power of nature that formed these spectacular islands.

Cruises that sail from Britain necessarily take a little longer to get to their destinations, so it’s doubly important to make sure the cruise line and the ship are right for you.

I had only ever done fly-cruises before, and sailing from Southampton was a revelation. Leaving your car in secure parking, where staff have a trolley waiting by your boot before you switch off your engine, you stroll 100 yards to the cruise terminal where your luggage is whisked away.

Fred Olsen requires everyone on board to be double-jabbed and boosted, so our Covid paperwork was examined, we were checked in, and 30 minutes after arriving we were on board the ship.

And what a ship. MS Bolette was new to the Fred Olsen fleet last year and takes about 1,300 passengers, so it has a friendly, intimate feel you don’t get on big vessels. The staff are so keen to make everyone feel at home. They only have to serve you once or twice to remember how you like your coffee or where you prefer to sit in the bar.

But the ship is big enough to offer excellent facilities. There are two large pools, one indoors with a retractable roof and one outdoors, and two theatres, the two-tier Neptune Lounge for musical theatre, magic and comedy shows, and The Auditorium for lectures, cookery demonstrations and cinema nights.

Food is a huge part of any cruise, and they’ve certainly got that covered.

You are allocated to either The Bloomsbury or The Terrace for dinner. It’s basically one restaurant – The Terrace is the upper level – and the same waiter is yours for the cruise.

Our server was Aries, and after two weeks we wanted to take him home. He noticed immediately that my husband Les was left-handed and after day one the cutlery was laid accordingly, which is more than I usually manage.

In fact, I did wonder if Aries was a mind-reader, because you only had to think “my wine needs topping up”, or, “I’m ready for that pudding”, and there he was at your elbow, proffering the very thing you’d only just realised you wanted.

This is the formal restaurant, open for breakfast and lunch too, where dinner is five courses with plenty of choice.

The View is a more informal restaurant for breakfast, lunch, afternoon tea and dinner, with a huge and varied buffet served at the counter. Being informal types (okay, slobs) with eclectic food tastes (okay, greedy), we came here for breakfast most days and for lunch on sea days.

But one of the stand-out things about Bolette is its two speciality restaurants, which have a very reasonable surcharge of £10 per person if you book in advance.

There was a bread basket that would feed a football team – puris, stuffed parathas, naans, chapatis and poppadoms – plus six dips. Hold back if you want to make it to dessert.

Our mains were melt-in-the-mouth xacuti chicken and pork vindaloo with rice and side dishes. It was all presented with flair and knowledge by a Goan native full of expert advice. The menu changes every three days, and you could eat here every night if you wanted to.

Another excellent option is Colours and Tastes, which offers Asian fusion food to die for. On one of our three visits, we had pork sisig, a Filipino street food, and delicate, fragrant Chinese dumplings, followed by light, tender crispy beef and massaman curried lamb shank. Another night we had prawn and scallop ravioli in a chilli bisque followed by Korean beef rib with kimchi fried rice.

Every mouthful was delicious. Some of it was familiar, but it was tastier, lighter, and less greasy than any version I’d tasted.

After all those calories, we dragged ourselves up to the excellent gym a few times, where there was a ­programme of classes. 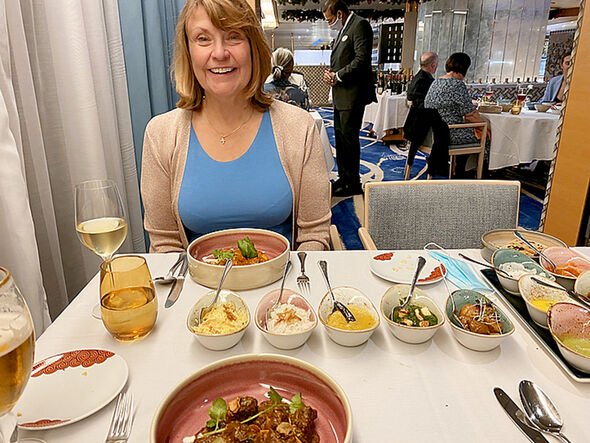 We also answered the siren call of the Atlantis Spa, where massage therapists pummel away your aches and pains. I tried the Traditional Thai massage and the Hot  Stone Massage, both £87 for 75  blissful minutes.

Our last port of call was Madeira’s capital Funchal, where we joined a trip to the beautiful Monte Palace gardens… 17.3 acres of plants from all over the world. It is perched in hills behind the town, reached by cable car, in the grounds of an old hotel.

There is very little that won’t grow in Madeira’s climate and here exotic orchids and African cycads flourish beside Scottish heathers and English roses. Paths wind around lily ponds, through arches and past statues, a surprise around almost every corner.

Then it was back to Bolette for three days at sea, chatting to the staff who’d become our holiday family, savouring a drink while listening to live music in The Observatory bar.

No wonder the Future Cruise desk was one of the busiest spots on board.

Fred. Olsen offers a 15-night Canaries round trip on Bolette from £2,099 per person. Sails from Southampton on October 14, 2023 and calls at Terceira and Sao Miguel (overnight) in the Azores, La Palma, Tenerife, La Gomera and Madeira. fredolsencruises.com

JOY OF THE JOURNEY

BOOK a Fred. Olsen cruise and you could enjoy one of five new “Signature Experiences” where experts will be on hand to give you the lowdown on a range of topics.

Foodies can sign up for Treats of the Region featuring cookery demonstrations of local delicacies.  Amateur astronomers will love the sunrise, sunset or stargazing events on board as part of the Sky at Sea programme. You could join a hosted talk on Scenic Discoveries, as your ship sails through some of the world’s most beautiful waterways, lochs, lakes and fjords.

The Itinerary Insights talks will focus on culture, art and history to give you a deeper understanding of your destinations, while the Ship and the Sea programme will teach cruisers all about Fred. Olsen’s five generations of maritime traditions. There will even be “An Audience With…” featuring Q&A sessions with Captains and crew.

The cruise line has already started introducing its Joy of the Journey programme onto its sailings, with a complete programme on all cruises from 2023, including Balmoral’s 78-night Exploration of South America and the Antarctic cruise, sailing on January 5.

Falklands veteran Simon Weston will be on board to talk about his war experiences. You can learn how to cook Chilean empanadas, Uruguayan chivito and Brazilian feijoada or join the guides on deck for stargazing in the middle of the Atlantic. 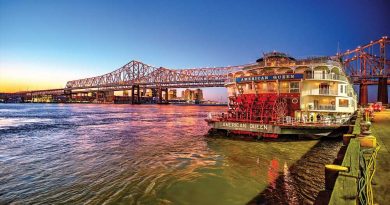 After Ida, river cruise lines adjust itineraries on the Mississippi 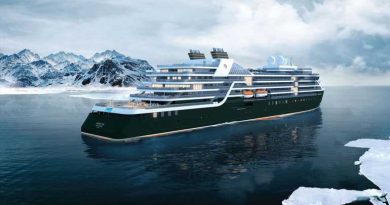