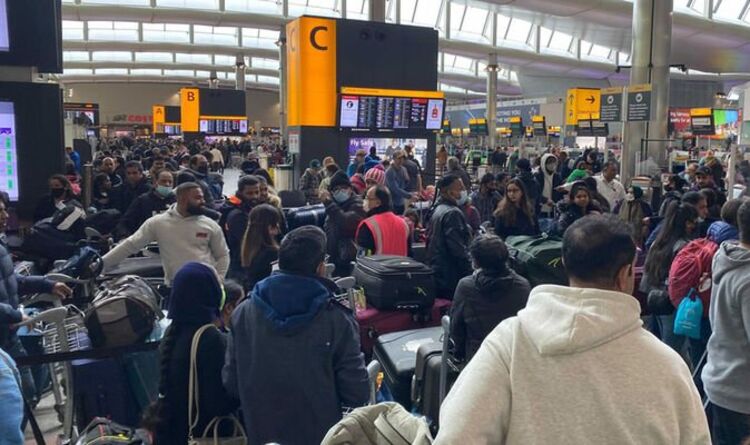 A tourist who queued at Manchester hub branded it the “worst airport in Europe” while holidaymakers at Birmingham Airport have endured hours waiting in security. Photographs taken at Birmingham show the queue snake through the terminal, reportedly even stretching down the escalators into the check-in area.

One woman tweeted: “Anyone travelling from Birmingham Airport today, give yourself plenty of time! Queues are absolutely ridiculous.”

easyJet and British Airways cancelled more than 300 flights today, with the former blaming high levels of sickness among employees as well as staff shortages caused by Covid.

Some passengers report being given only 10-minutes notice for a 10-hour flight delay, reports My London.

But tourists have today complained about queues in security, with one man tweeting to say he’d waited three hours to get to the airside lounge.

He said: “@manairport Arrived at the airport at 6.15am for a 9.20am flight, 3 hours of a complete nightmare. Never will I or everyone else I spoke to use Man airport again. Awful experience!!!”

As Manchester Evening News reports, others hit out at the lack of staff.

“@manairport you have taken the fun out of families going on holiday, absolute shambles just to get through check-in and security,” reads one tweet.

“@manairport another day another shambles at T1. The worst airport in Europe,” another said.

The airport apologised in a tweet posted on their official account this morning. It said: “As we continue to recover from the pandemic and passenger numbers grow, security queues may be longer than usual at times. If you’re due to travel in the next few weeks, please arrive at the earliest time your airline allows. We apologise to our customers for the disruption.”

Birmingham Live has contacted Birmingham Airport regarding the delays.

It’s a hub for Jet2.com and Ryanair.

British Airways scrapped more than 100 short-haul flights to and from London Heathrow on the weekend.

It left passengers across Europe stranded with some reporting their flights were rebooked for a day or two day’s time.

BA said it is employing new staff and hopes to have full operations underway by the end of May.