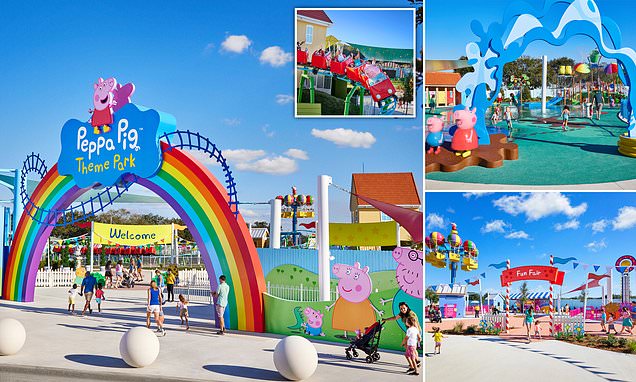 My daughter’s eyes light up at the familiar squeal that greets us as we make our way into the world’s first Peppa Pig Theme Park.

We’re a long way from jumping in muddy puddles in the British countryside where the kids’ TV show, which has been running since 2004, is set.

Now, Mummy, Daddy, Peppa, George and their friends have gone Stateside for a new adventure, and my family and I are basking in the warm winter Florida sun as one of the park’s first visitors. 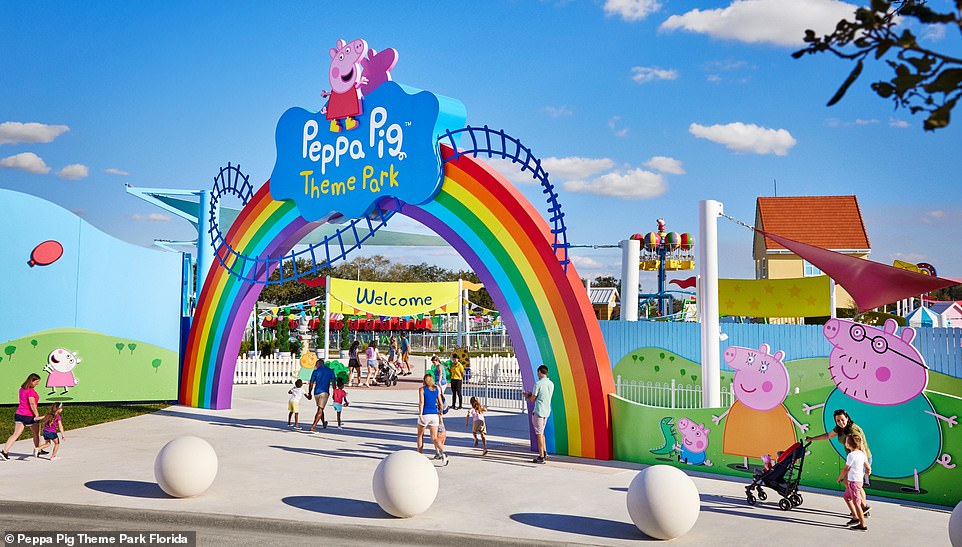 Carol and her family are among the first visitors at the world’s first Peppa Pig Theme Park, which is a 45-minute drive from Orlando, Florida 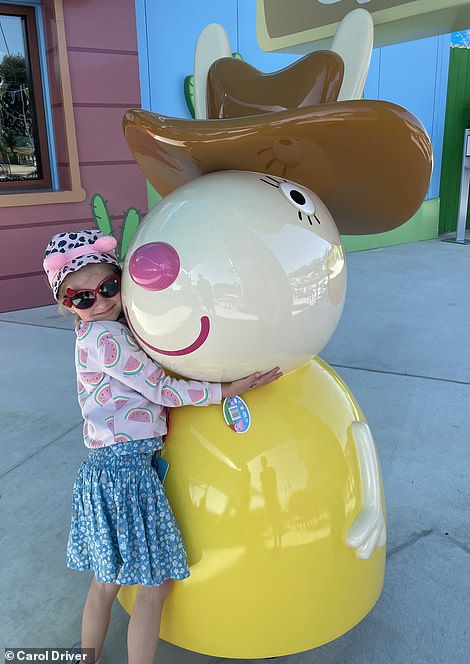 It’s located a 45-minute drive from Orlando in the city of Winter Haven — and next door to Legoland Florida.

And although there’s a Peppa Pig World inside Paultons Park in Hampshire in the UK, this is the famous character’s first stand-alone site.

As a ‘certified autism centre’, all the attractions also have a sensory guide featuring how children with sensory processing issues might be affected by each of the five senses.

There’s also a not-too-big outside show area with comfy beanbags, while lifesize characters from the show pop up at every turn and ‘talk’ to the guests in their familiar voices.

We head over to our first ride — Daddy Pig’s roller coaster — and take a seat in the famous bright red car. It’s a short adventure caused by Mr Bull digging up the road. Amelia loves it, waving her hands in the air as the ride navigates the corners — it’s the ideal speed for younger kids too. 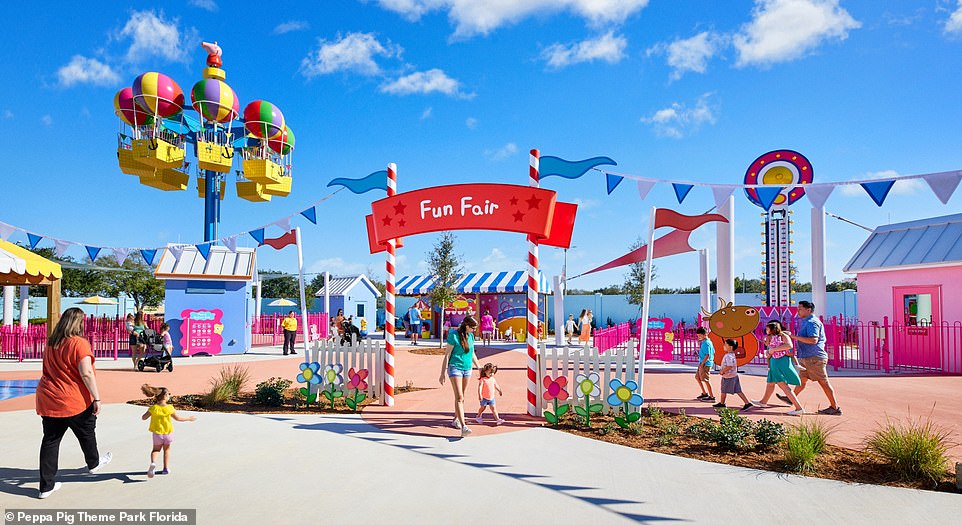 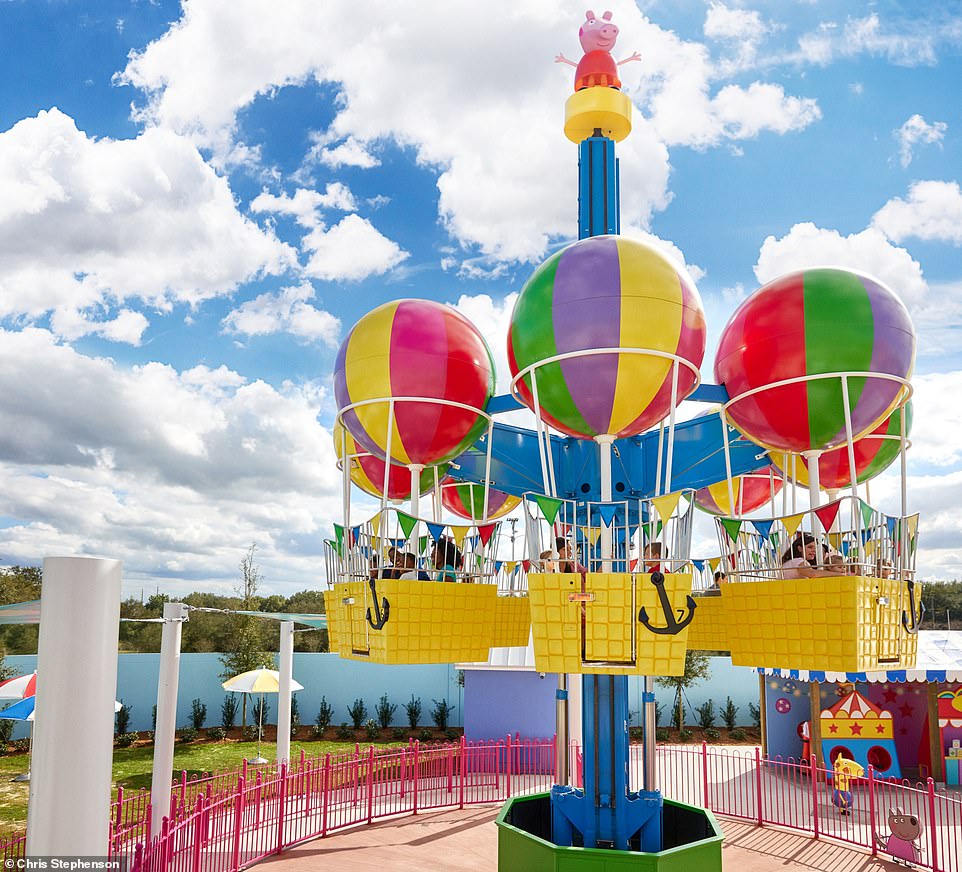 Pictured is Peppa Pig’s Balloon Ride. ‘The pretty hot air-style balloons and baskets spin around while raising slowly into the air for a great view of the park, before then gently dropping back down again,’ writes Carol

Next up is Peppa Pig’s Balloon Ride. But before we ride we have to ‘hook’ as many yellow ducks as possible in a fairground-style game. The ‘winner’ (spoiler: everyone’s a winner) gets to go on.

The pretty hot air-style balloons and baskets spin around while rising slowly into the air for a great view of the park, before then gently dropping back down again.

Then it’s over to the other side of the five-acre site for Grandad Dog’s Pirate Boat ride, which sails around in the water at a slow speed that’s perfect for little ones. 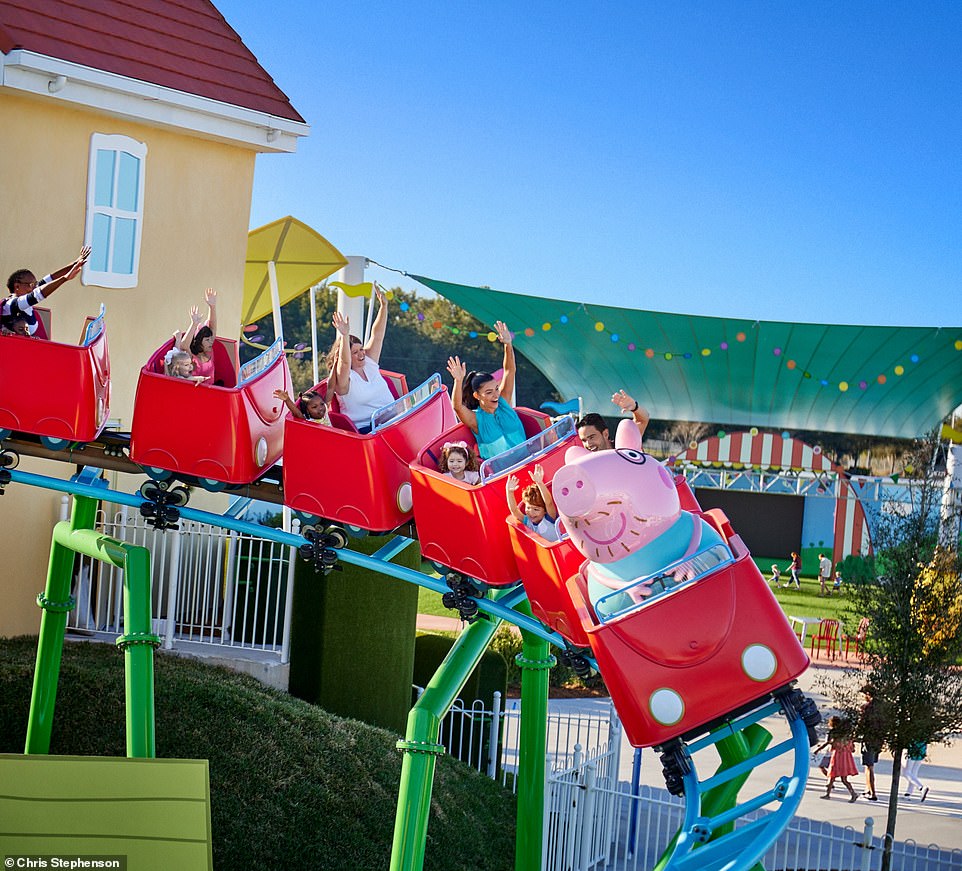 The first ride that Carol and her family try is Daddy Pig’s roller coaster, pictured above, which is ‘the ideal speed for younger kids’ 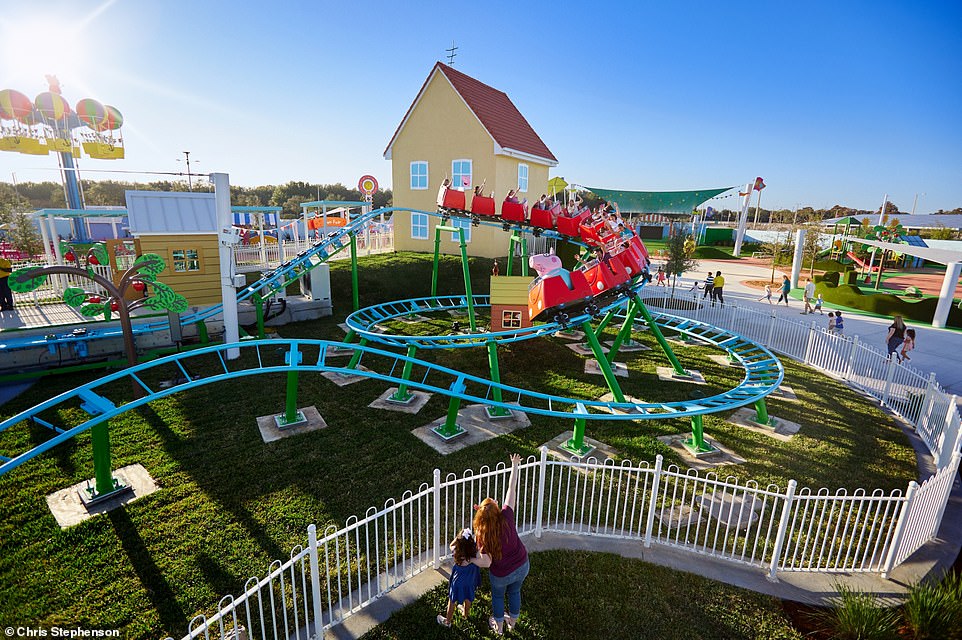 Carol’s daughter Amelia loves Daddy Pig’s roller coaster, pictured, and waves ‘her hands in the air as the ride navigates the corners’

Then there’s Grampy Rabbit’s Dinosaur Park, which takes us on a quest while riding a green dino (George’s favourite toy) with lots of twists and turns.

In a (very, VERY) scaled-down version of the Orlando Sky Ride, there’s also Mr Bull’s High Striker. Once the hammer hits the bell, we head to the top of the ride, before coming back down again.

In the middle of the park is a camping-themed tricycle adventure where kids pedal their way through a campsite in the woods and an icy mountain. It’s a great way to keep little ones active. 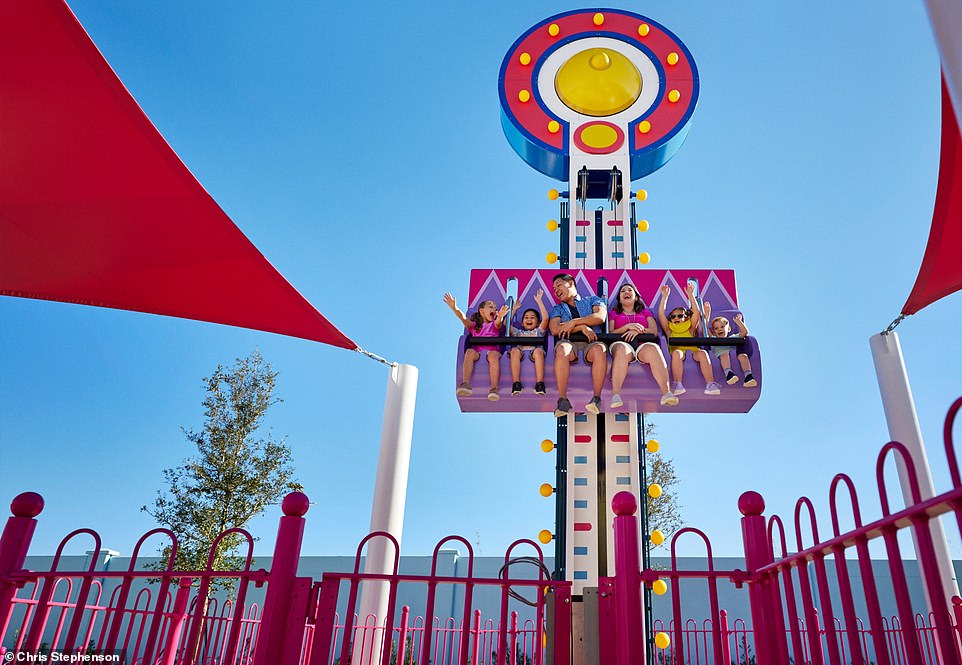 Mr Bull’s High Striker, pictured above, is a very scaled-down version of the Orlando Sky Ride, according to Carol

Of course, asking young children to queue for a ride is impossible, so the fact the park is dotted with so many additional activities is a brilliant idea.

At the funfair is where you’ll find free games such as hoopla, and bean bag tossing.

Find your way to George’s bright blue fort to discover the frog making the croaking noise in the middle — after navigating your way through a vibrant green maze.

We head over to the outdoor play area that is Grandpa Pig’s Greenhouse, with slides, things to climb and crawl through.

There’s also Peppa Pig’s Treehouse, Rebecca Rabbit’s Playground and Madame Gazelle’s Nature Trail where little ones can have fun figuring out what’s made the footprints on the stepping stones. 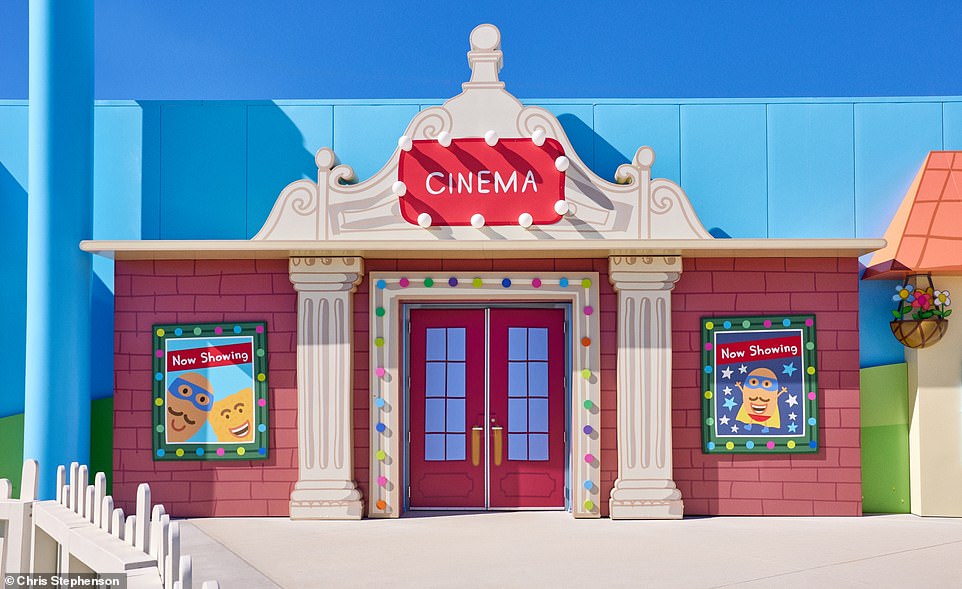 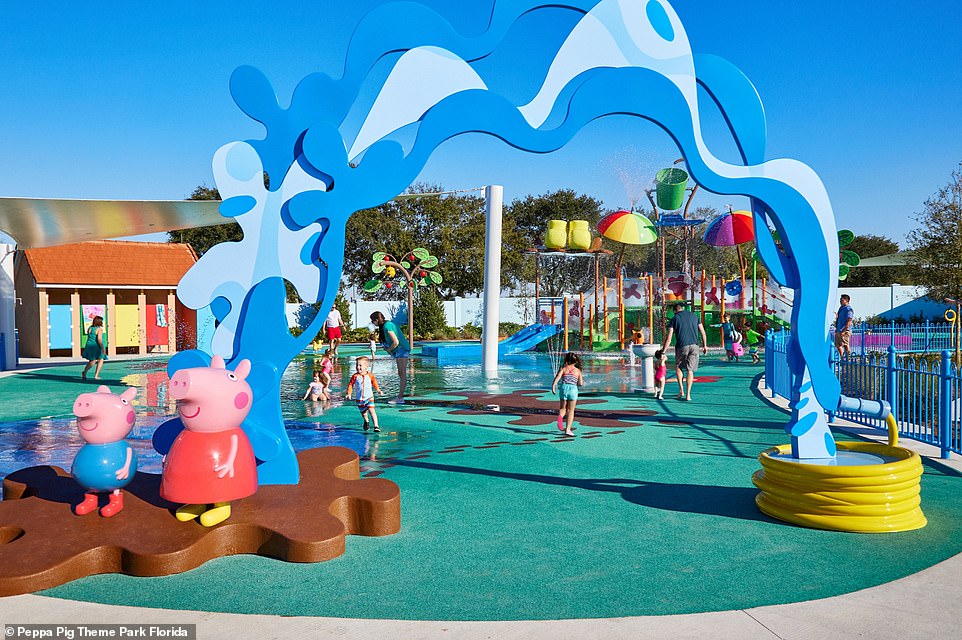 Carol’s daughter Amelia spends an hour ‘running in and out of the fountains in the splash pad’, pictured above 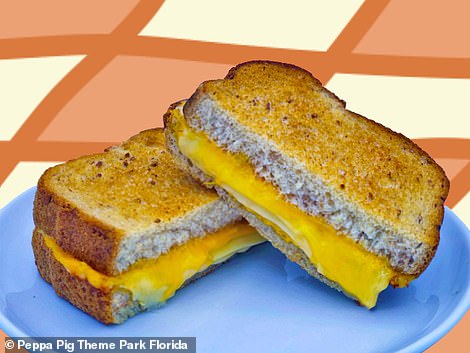 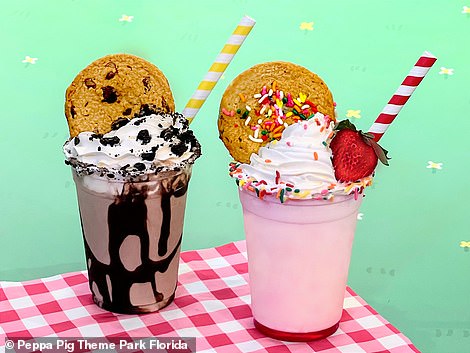 For lunch, Carol and her family head over to Miss Rabbit’s Diner. The menu there is ‘impressive’, she says, and includes grilled-cheese sandwiches (left). They wash everything down with too-good Muddy Puddles chocolate and strawberry milkshakes, topped with whipped cream and a huge cookie (right)

The below deal is for two adults and two children under 12. It includes direct flights with British Airways from London, seven nights accommodation at the four-star Legoland Hotel on a bed and breakfast basis with three-day park entry to Legoland, Legoland Waterpark and Peppa Pig Theme Park.

Ready for a rest, we sit on the huge beanbags at Mr Potato’s Showtime Arena for a fun performance, with lots of songs and audience interaction, as well as an appearance from a lifesize Peppa and George.

For lunch, we head over to Miss Rabbit’s Diner, and sit in one of the comfy red booths — there’s also an alfresco area with views of the park.

The menu is impressive, with grilled cheese and chicken salad sandwiches, pizza, and healthy salad options.

We wash everything down with too-good Muddy Puddles chocolate and strawberry milkshakes, each topped with whipped cream and a huge cookie. There’s just about room to try the marshmallow mud cup – layers of marshmallow, chocolate pudding, Oreo crumbles, and gummy frogs.

Then we head to the cinema to watch a couple of episodes of the TV show — which is now shown in 180 countries and in 40 different languages — where it all began.

Amelia then spends the next hour running in and out of the fountains in the splash pad. There are water slides, sprays, and lots of other activities — including a drench bucket. As it’s already 26C in the middle of February, giving kids somewhere to cool down is a must.

We dry her off and get ready to head to our Legoland pirate-themed hotel for the night — you can buy a combination ticket that combines access to the two parks, which are next door to one another.

We wander through Mr Fox’s gift shop, where there are plenty of toys to tempt little ones (thankfully you can exit the park without visiting the shop) but we manage to escape with just a few small things.

There’s no doubt the new site offers a fun day out – after all, everyone loves a theme park…

Winter Holidays: Get the most for your money by visiting this European Christmas Market

Be Wary Of ‘Juice Jackers’ When Traveling 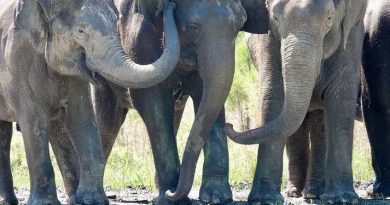