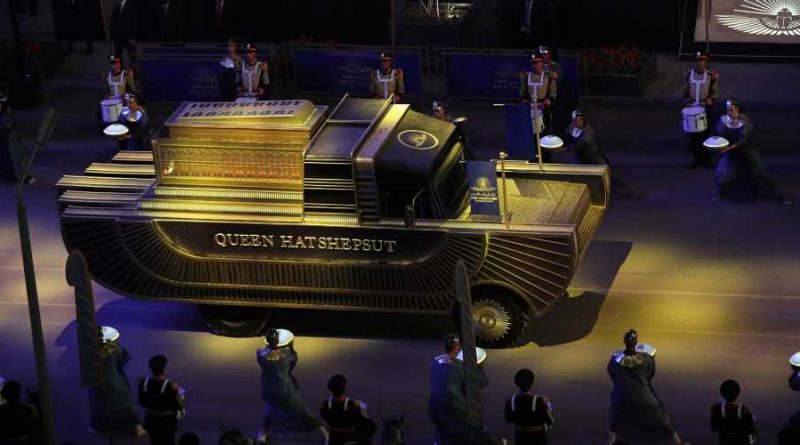 Twenty-two mummies made their way through Cairo in an elaborate over the weekend to celebrate their new resting place at the National Museum of Egyptian Civilization.

The "Pharoahs' Golden Parade" — complete with performers, light displays, and a marching band — traveled from the Egyptian Museum in Tahrir Square to the new museum site, about three miles southeast.

The mummified remains of the 22 pharaohs, 18 kings and four queens, were transported in trucks decorated to look like the ancient boats that once carried the bodies of pharaohs to their tombs. The mummies had been packed inside a tube of nitrogen to protect them during transport.

"By doing it like this, with great pomp and circumstance, the mummies are getting their due," Salima Ikram, an Egyptologist at the American University in Cairo, told Reuters. "These are the kings of Egypt, these are the pharaohs. And so, it is a way of showing respect."

The journey across the city took approximately an hour. Roads along the Nile were shut down for the ceremony. When the mummies finally arrived at their new museum, they were greeted with a 21-gun salute. The made-for-TV event was broadcast throughout the world, intending to stir up interest in Egypt's antiquities collection and revive tourism interest during the COVID-19 pandemic.

Most of the mummies were from Egypt's New Kingdom, which ruled from 1539 BC to 1075 BC, and included the famous rulers Ramses II and Queen Hatshepsut. The mummies were buried about 3,000 years ago in and around Egypt's Valley of the Kings and were discovered during an excavation in the 19th century.

After excavation, the mummies were transported to Cairo by boats. According to Al Jazeera, Some were displayed for the public to see while others were privately stored. Now, 20 of the mummies will be on display at the brand new museum.

Best tiny holiday houses to escape to around Australia

Staying at Jalakara, on Havelock Island, in the Andamans