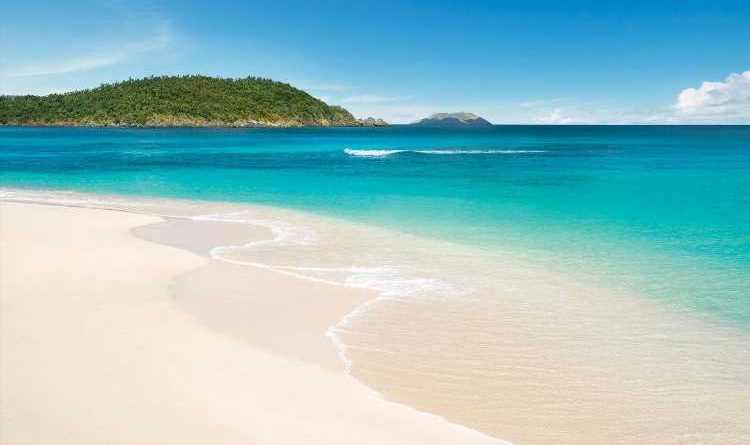 For strolling hand-in-hand, lounging under the sun, or even casual snorkeling, Hawksnest Bay more than fits the bill. (U.S. Virgin Islands Department of Tourism/)

Crossing the Caribbean’s signature turquoise water from St. Thomas to St. John, the tiniest of the U.S. Virgin Islands (USVI), my husband and I first felt the refreshing trade winds roll over us, softening the tropical temperatures. While waiting to board our ferry, we’d shared a Painkiller—the classic island rum cocktail—to assist with our transition to island life. Watching Cruz Bay now rise in the distance, I had a strong hunch we were in the best place on Earth to fete our milestone anniversary, a feeling confirmed when I learned the island’s nickname is “Love City.”

As USVI newbies, we’d decided on St. John because the main town of Cruz Bay is cozy and walkable—with easy access to bars, restaurants, shops, and, of course, romantic-laced beaches. Whether by dumb luck or fate, clearly, it felt right to be here.

Passing through the town square where Cruz Bay Landing was hopping with diners, we rolled our luggage the couple blocks to our hotel, deftly maneuvering around chickens running helter-skelter in the streets.

David and Denise, the husband-wife team from Chicago and Toronto who own the intimate 14-room Cruz Bay Boutique Hotel evidently felt the romantic charms of the island long ago. They were married in 2009 at St. John’s glamorous 1950s-era Caneel Bay, a low-impact eco-resort nestled in the Virgin Islands National Park established by the Rockefeller family. The following year, the couple permanently adopted island life and opened their hotel.

Denise mused, “It’s been a wild ride, but we wouldn’t change a thing!”

It’s not hard to see how people could fall in love in—or with—Cruz Bay. (U.S. Virgin Islands Department of Tourism/)

The back-to-back 2017 hurricanes are surely part of what she meant, though their hotel was luckily spared extensive damage. Caneel Bay, on the other hand, was thrashed like so much of the island and is still struggling to rebuild. Of course, the global pandemic of 2020 and ongoing recovery only piled onto the island’s economic challenges.

Yet, romance is alive and well on the island—our bougainvillea-adorned Juliette balcony served as a daily reminder. As weary urbanites, naturally our vacay M.O. was to only dine at restaurants which afforded water views. We struck gold at Joe’s Rum Hut—the glittering pink-orange sunset was so exceptional everyone, including staff, was fidgety—moving around restlessly to capture the best photo. At the enduringly popular The Beach Bar we were lucky to find seats the night when favorite local band After Irma entertained an animated crowd. Sipping on my first Dark ‘n’ Stormy, which, as is common for all USVI rum drinks, uses the St. Croix-produced Cruzan rum, I moved with the mesmerizing rendition of The Temper Trap’s Sweet Disposition.

One server told us of his disappointment with his career as a radiologist and decision to buy a one-way ticket to St. John in 2008, a story we heard in various iterations during our stay. Surrounded by the magnetic island vibe, it was totally understandable.

On a quest to soak up every romantic view, we headed up high to The Windmill Bar, a new establishment atop Neptune’s Lookout which includes the historic Susannaberg windmill on the 18th century sugar plantation. We enjoyed casual West Indian-inspired cuisine served out back cafeteria-style from a tent. The flavorful coconut shrimp, rice, mashed plantains, and mac and cheese padded my insides, to say the least.

The jaw-dropping view over the northern beaches with islands dotting the water was surreal, a setting ensuring dreamy couple time… and a few kisses, I’m pretty sure.

But who wants to just look at the water? We were there to step into the celebrated beaches of St. John. Denise helped me narrow our list, confessing that St. Johnians are beach snobs. The nearby north shore is where the island’s most glamorous beaches lay, and since we’d not wanted to rent wheels, we got a taste of island taxi culture, an experience all its own. Takeaway: To enjoy the experience, just relax and go with the flow.

Trunk Bay’s gorgeous white sand makes it ideal for couples looking to catch some rays, but the underwater trails make it perfect for adventure, too. (U.S. Virgin Islands Department of Tourism/)

As one of the world’s most beautiful beaches, it was a no-brainer to begin with Trunk Bay. From the shady cove we called dibs on for a lazy day, we felt we’d dropped into a painting of sugary sand and dazzling water—who wouldn’t? But you won’t regret rousing yourself to snorkel the beginner-friendly Underwater Trail which sharpens your marine-life prowess through explanatory signage. My husband by my side, a good book and a Pineapple Margarita in hand rounded out a day I wish I could have corked in a bottle.

Maho Bay is where sea turtles gather to nibble on short grass growing in the shallow beach. We strapped on snorkeling gear to join them and counted six at one point – an awesome sight. The laid-back hippie-esque huts and food trucks across the road served up Maho-ritas, a passion fruit + pineapple + mango + tequila elixir I heartily recommend.

We couldn’t resist visiting Oppenheimer Beach, once the private beach belonging to J. Robert Oppenheimer, father of the atomic bomb. The family history is tinged with tragedy but today, the public beach is a sleepy tropical paradise partly because it’s difficult to find—which is great for us beach bums.

Honeymoon, Hawksnest, Trunk, Salomon, Maho (pictured)—St. John is home to some amazing bays and beaches that serve as unforgettable settings for those seeking romance. (U.S. Virgin Islands Department of Tourism/)

As avid hikers, St. John surprised us with its web of trails. Though we didn’t have time for top-rated Ram Head Trail, we were pumped to be able to catch a trail in town which led to Honeymoon Beach, another pristine spot where we promptly plunged into the water, a sweet reward for the effort. It’s easy to miss, but if you leave the trail earlier, you’ll arrive at Salomon Bay, an unspoiled, secluded beach as there’s no car-access. Besides a quiet family of bookworms, we had the place to ourselves. With catamarans bobbing beyond in the emerald water, it was a setting of serenity. Perhaps this little treasure is St. John’s best-kept secret—shhh!

On our final night, Captain Jay of Cruz Bay Watersports welcomed us aboard our sunset sail-dinner cruise to Lovango Cay Resort and Beach Club on a private island. Crew members Erin and Ainsley busily raised sails, circulated trays of appetizers and refilled drinks, leaving us guests to our job of taking in the staggering beauty of the Caribbean islands. A young couple onboard was honeymooning, having just been married the previous Saturday in North Carolina. I congratulated them and when I mentioned we were celebrating our anniversary, we shared a toast: “To love!”

This new private island resort has had people from all over the world buzzing. (Lovango Cay Resort and Beach Club/)

We were supremely keen to experience the previously uninhabited island with its newly opened resort, an ambitious project masterminded by famed Nantucket/Martha’s Vineyard hoteliers Mark and Gwenn Snider. Talk about getting lost in paradise! We docked and were greeted by name and handed rum punch for our stroll around the boardwalk, infinity pool, and terrace before dinner.

Perched on the water, our little table beneath a tree was seductively bedecked with fairy lights, with St. Thomas and St. John twinkling in the distance. Our charming server Jimmy had some recommendations and we indulged in starters—the crab cake, Caribbean guacamole, and shrimp and crab chowder. Our mains—sea urchin gnocchi and lamb—further reinforced Chef Stephen Belie’s creative genius. Like others on staff, Jimmy explained, he’d relocated recently from the Sniders’ Martha’s Vineyard property. With its majestic wild beauty, the resort is just getting started and is already a tremendous win for the USVI.

On the way back we sank deeply into beanbag chairs, sailing under an open, star-studded sky. Dinner left us happily sated, but our inaugural trip to St. John had only whet our appetite. 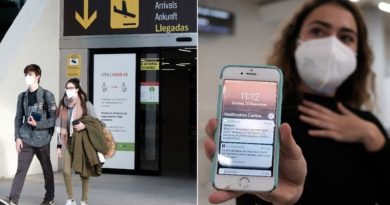