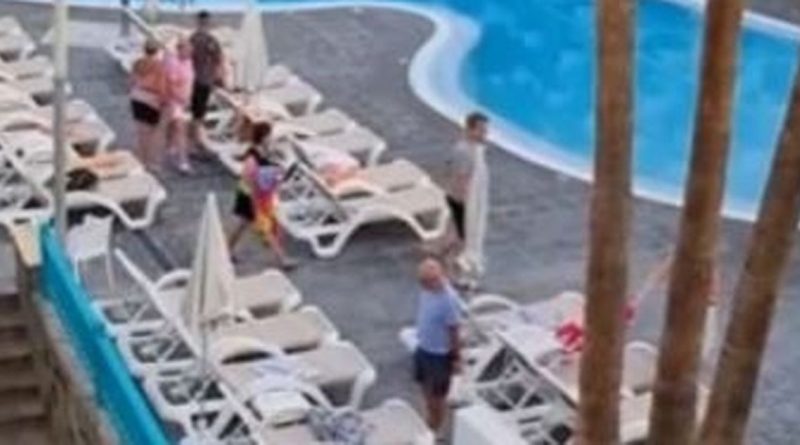 Holidaymakers have been shamed for getting up at the crack of dawn to reserve sunbeds with their towels during their stay in a Tenerife hotel.

The video, which was shared on TikTok by a user named Sarah, showed people who had been waiting for the pool to open to run out and nab their spot by throwing towels down to reserve them.

Comments were turned off on the video of the hotel guests so none of the 4million viewers could express their concern that they showed regard for those who have slept in and may miss out on a poolside spot.

It has received more than 93,000 likes and had more than 4,000 comments before they were switched off and hidden from view. But the video isn't the first TikTok clip of sunbed hoggers to go viral on the app as it seems like holidaymakers have been facing backlash for their habit since summer began.

Last month hotel staff have stepped in to remove sunbed-blockers' towels from deck chairs in a Tenerife resort.

Workers were seen picking up dozens of items laid out by guests at the Gran Costa Adeje Hotel in southern Tenerife in a bid to reserve the loungers.

Holidaymaker Amanda Proctor filmed the staff removing the towels and bags before leaving notes explaining where they could be collected from.

However, the public seemed to be on the side of the towel removers, backing a move away from over-zealous sunbed reservers.

One user commented: "It's the ones who reserve poolside who don't show up until 4pm."

Proctor replied: "Exactly. I was lying there thinking… go on!

"They took their bags, towels and everything left a note on the sun lounger where to collect."

She said it was 'absolutely hilarious' watching people come back to find their towels removed from the sun loungers, claiming that many did not return until mid-afternoon.

Do you think sun lounger reserving should be allowed? Tell us in the comments below…

The World’s Largest Underwater Theme Park Is Coming to Bahrain