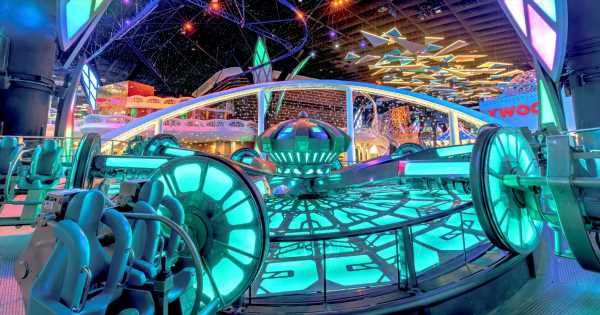 Brits especially know that while they’re walking from ride to ride or enjoying a picnic they may get hit with rain.

Or, in the summertime, be forced to stand in the blazing sun while your shoulders sizzle.

Well, it seems the remedy to that is an entirely indoor theme park – and a new one has just opened in Doha.

Doha Quest, in Qatar where the World Cup will be held, is not just sheltered from the elements, but also state-of-the-art.

The massive 32,000sqm space will feature three "realms" based on the past, the present and the future so, you’re sure to get sucked into the magic.

Oryxville is based on the Arabia of history and is littered with incredible ruins and mysteries to uncover, with plenty of rides and attractions to allow you to "slide and spin across the dunes and embark on a journey through a magical fantasy realm".

The Oryx Express coaster will take you swooping through the land where you can spot other rides like Laser Oasis, Dune Bashers dodgems, the Legend of the Golden Oryx 3D motion simulator and more.

There’s also Oryxville’s Magis’ Ice Flow – a spinning ride which lets you stand up as it slips and spins across the desert.

From there, guests can head towards the present land "City of Imagination".

You can explore "a gleaming cityscape characterized by its stunning blend of traditional and modern architecture, centered around the notion of travel through space and time".

It explores what we can do with technology – and where we might venture one day.

The Time Tumbler unicoaster spins you on a clockwork mechanism while the Magma Blast drop tower is the world’s tallest of its kind.

Spot working robots at Robomania, speed by on a biplane at Fly with Flap, and feel the thrill on the Time Travel ride’s rotating orbit.

Guests who are all about the up-and-coming should head to the realm named Gravity.

The website states: “Gravity is a state-of-the-art futuristic spaceport, featuring out-of-this-world galactical missions and adventures set in a bright and bold tomorrow.”

There’s a gravity swing for adrenaline junkies, Spikes Astro Tower for those who want to blast off and the world’s tallest indoor rollercoaster – the Epiq Coaster.

In Questville, smaller children can get stuck into games, playgrounds and less aggressive rides.

On top of all the thrilling rides and journeys you can do on there are a number of food outlets.

Planet Hollywood Doha serves classic burgers and fries while you can grab a hot dog at the space cantina, coffee at Quest Cafe and popcorn and snacks at the Sarab Kiosk.

Brits looking for an adrenaline rush closer to home can check out the Halloween nights offered by UK theme parks. Or, book a flight in the opposite direction and explore the magic of Disneyland California.