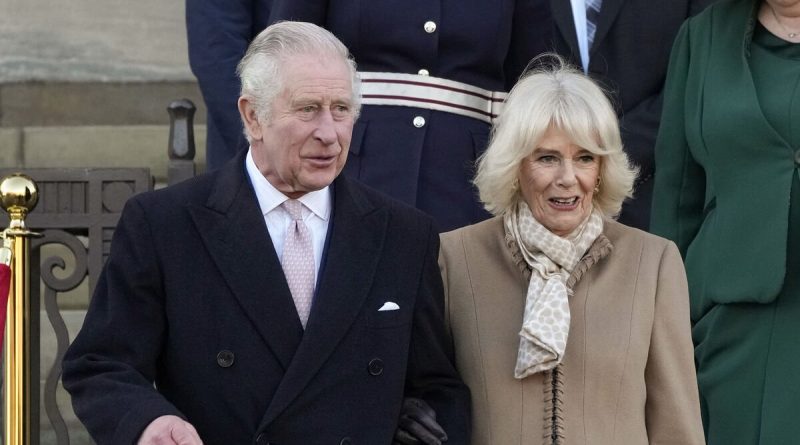 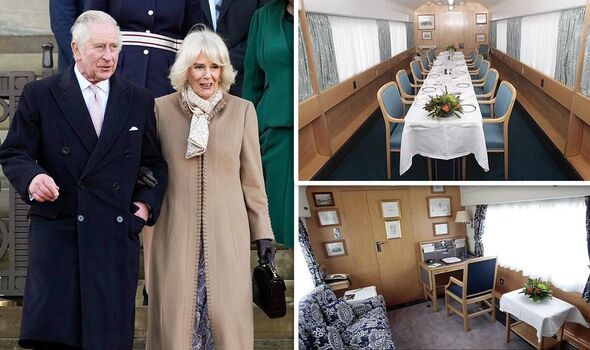 King Charles and Queen Consort Camilla arrived in Manchester today via the Royal Train. This is the first time the monarch has used this mode of transport and it is believed he journeyed overnight from Ayr in Scotland, after spending the beginning of the week at Dumfries House, an 18th-century property, part of The Prince’s Foundation. The Royal Train has been part of the British Royal Family for decades and other the years it has undergone refurbishment in line with each monarch’s interior design taste and preferences. Presently, the inside of the train is rather sparse, but it was not always this way.

The royal train has not been refurbished since the late 1970s when the present royal carriages came into service for Queen Elizabeth II’s Silver Jubilee in 1977.

The train King Charles and Camilla used today has nine carriages, including bedrooms, dining rooms and a study.

As for what it looks like inside, the train is more functional than palatial and its furnishings are outdated.

The King has his own area fit with a bedroom, bathroom and small study with a desk. A blue and white patterned sofa with matching curtains is also pictured.

The other carriages include dining cars, a general-purpose saloon for senior staff with sleeping quarters, and a sleeping area for junior staff. A royal chef is also onboard the train.

As for whether Queen Elizabeth and the Duke of Edinburgh’s carriages are still on the train – it’s not been noted.

The late Queen had her own private 75ft long air-conditioned and electrically heated carriage, which contained a bedroom with a single bed, a sitting room, a desk and dining quarters, as well as a bathroom with a full-sized bath.

The Duke of Edinburgh also had his own carriage of similar design but had a fitted kitchen, green curtains with matching chair cushions and a brown carpet.

The royal train never used to be so plainly decorated. Queen Victoria was the first monarch to travel by train, leaving Slough at noon on June 13, 1842, and travelling to London’s Paddington Station.

It was reported, Victoria was persuaded to use this method of transport by Prince Albert, who was fascinated by the new technology.

Photos reveal how the royal train was once the height of luxury during Queen Victoria’s reign, but over the years it has been modernised and adapted. Carriages were remounted on a twelve-wheel bogie underframe to offer a smoother ride.

The coach contained a day and night compartment, as well as toilet facilities and accommodation for her ladies-in-waiting. There was also a second bed which was reserved for one of the royal princesses.

To mark Queen Victoria’s Diamond Jubilee in 1897, she was gifted another six-coaches-long train.

The saloon was not removed from the train until after her death in 1901, and the train was used to carry Queen Victoria’s coffin to Windsor when she was laid to rest.

King Edward VII then commissioned new saloons and including a smoking room made of mahogany and a lavish green velvet saloon.

King George V updated the train a decade after his father’s passing, and the bathroom included His Majesty’s bathtub, as well as carpeted floors and pink curtains. Within the bathtub is a red line which indicated how full the bath could be without spillage.

Before today’s journey, the Prince and Princess of Wales were the last royals to use the train when they hopped on board for a last-minute UK tour in 2020. Before that, it was used in 2018 when the Queen and then-future Duchess of Sussex, Meghan Markle used it to visit Chester for their first royal engagement together. 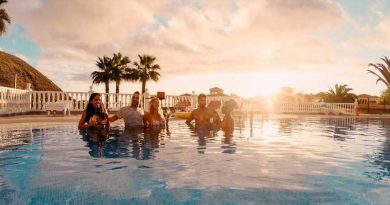 Tired of Virtual Vacations? Michelob Ultra Is Giving Away 3 Luxe Vacations to Take in Real Life

The most Instagrammable cherry blossom spots