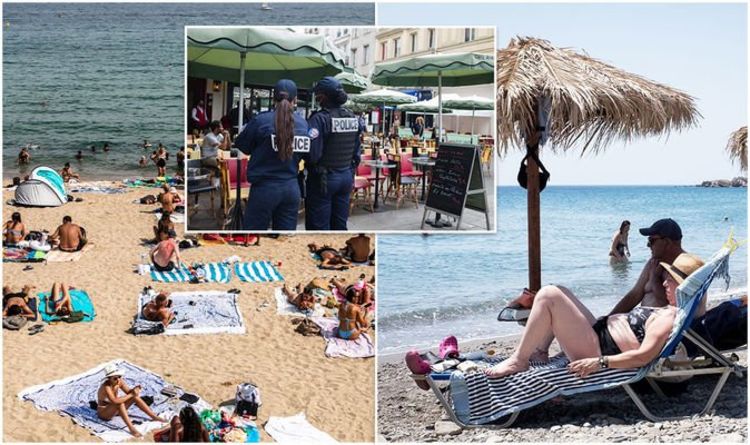 Spain, Greece and France have all seen an uptick in UK holidaymakers since amber list travel rules relaxed for fully vaccinated travellers. The next traffic light review is expected to come on Wednesday or Thursday when more nations could see movement between the red, amber and green lists.

Though there has been no official confirmation from the Government as to which countries will change colour, experts have started to make their predictions.

Is Spain likely to move to the red or green list?

Spain has seen a drop in Covid cases in recent weeks with cases of the Beta variant also declining.

According to Paul Charles, CEO of the PC Agency, there is “no chance” of Spain turning red.

He explained: “Its infection rate is dropping fast, meaning any variants are very much under control.

“Spain’s rates are half those of France and its vaccine rate is 65 percent fully-jabbed. British tourists there can rest easy.”

Moving Spain to the red list could also “risk the collapse” of the hotel quarantine system in the UK, head of Mark Bratt Travel, Scott Hadden, told the i.

In his daily coronavirus insight on Tuesday, data specialist Tim White said: “Spain won’t be moving category as I start the thread with more good news to report.”

He added: “In Spain, cases of Beta variant of COVID-19 are diminishing further.

“Still no Beta in Balearics, just 0.2 percent in the Canaries.”

Is Greece likely to move to the red or green list?

Greece has seen a rise in coronavirus cases, however, White says this data should not be of concern to Britons.

He explained: “Greece has an 18 percent rise in COVID-19 infections this evening, but nothing to worry about.

However, cases have started to change on some of the Greek islands, with more restrictions anticipated.

The Greek Health Ministry is due to issue a new update on curfews and music bans.

White predicts Rhodes may be hit with new Covid-safe measures.

Greece failed to turn green at the last traffic light review. It is not clear whether or not the Government will move it to the green list at the upcoming review.

However, as it is a popular summer holiday destination, Mr White told the i it is unlikely to see any change in category.

Is France likely to move to the red or green list?

France has reported an “11 percent drop in infections” according to White.

He explained that the “seven day [infection] rate is now down” despite the fact the nation has “much higher testing rates”.

This is good news, as it means the nation is unlikely to be pushed onto the red list.

However, the current infection rates in France mean it is unlikely to be moved to the green list.

US government to end COVID-19 screenings for certain international passengers